In The Creek: Server Architecture I described a program called “runI2C” which is a shell script that is run once per minute by the crontab on the Raspberry PI (RPi).  This shell script does a “sudo” and runs the java program “i2cdb”.

“i2cdb” is a Java program that uses the open source pi4j library to access the RPi I2C bus, reads the data out of the PSoC4 and then inserts it into the “creek data” database.  In order for all of this to work you first need to get the pi4j jar files.  To do that, on the Raspberry Pi, run “curl -s get.pi4j.com | sudo bash” which will install everything you need: 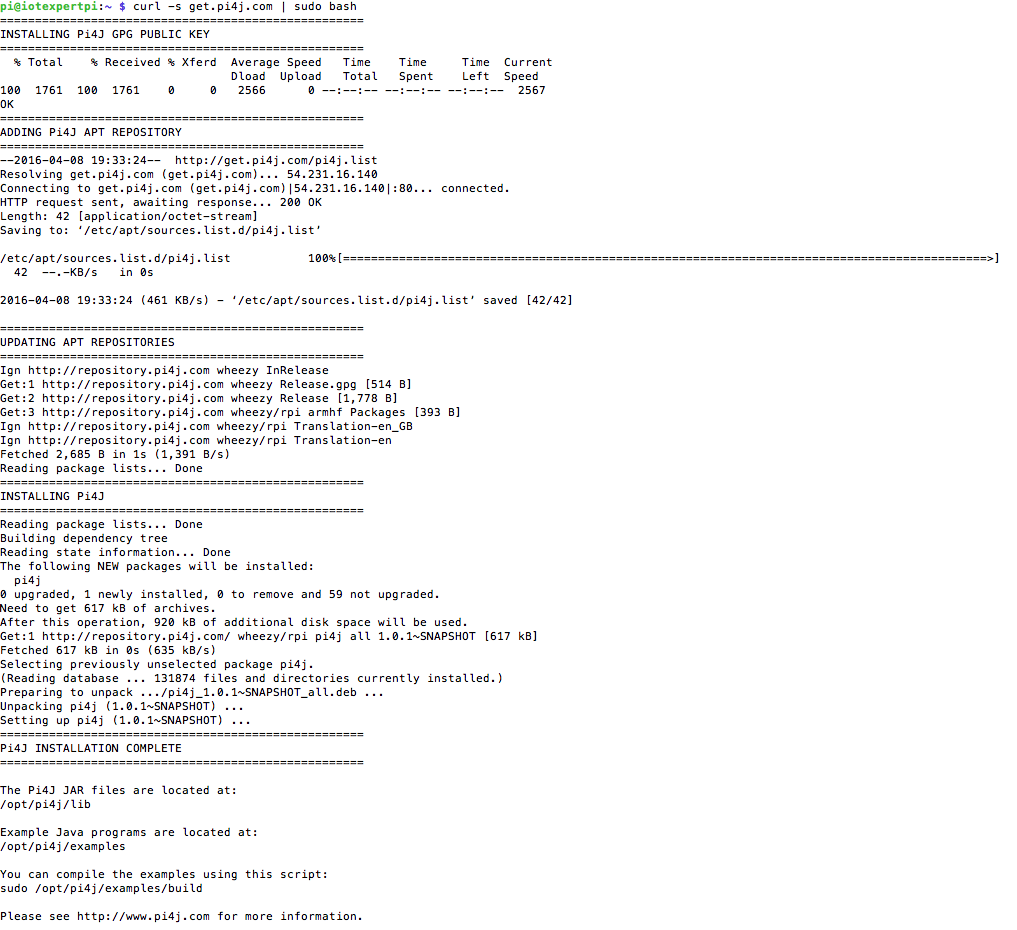 Pi4J is a Java library that will give you complete access to the GPIOs on the Raspberry Pi, you can read and write the GPIOs as well as use the UART, SPI and I2C communication devices.  Once you install the libraries you will have 4 jar files in “/opt/pi4j/lib” as well as a bunch of examples in “/opt/pi4j/examples”.

Because I wanted to edit the files on my Mac, I copied the libraries into my “lib” directory in the project so that Netbeans would know about them.

The next library that you need is the mysql-connector which is a jar supplied by the MySql team.  You can get it from their website.  I put this jar file in my “lib” folder as well.

In order to access the database, there needs to be a user in the MySql database.  To do this, log in as root in the MySqlWorkbench tool and add a new user.  I call this user “creek” and give it a password of “creek”, then restrict it to only being able to connect from the RPi IP address. 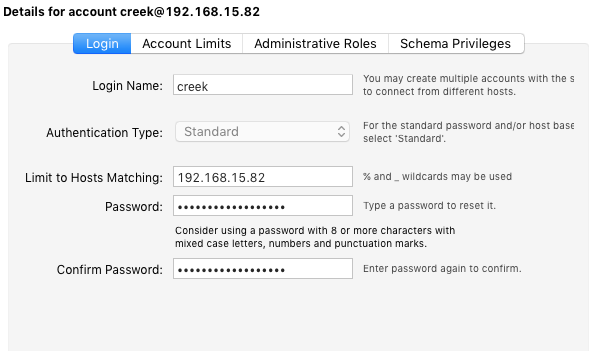 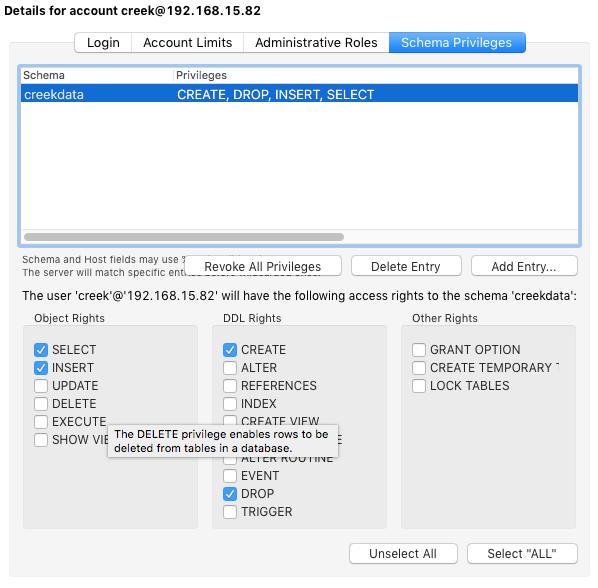 The next step is to create a MySql script to create the database.  Originally, I stored the ADC raw counts in the database because I wasn’t sure about calibration and I was interested in the raw data.  The problem with this method is that I had to encode the conversion from raw counts to depth on the server side.  I have come to believe that is a bad idea and that the acquisition hardware should be responsible for that conversion.

The easiest thing to do is to make a script to make the table.  I called it “table.sql” and I run it by doing “mysql -u creek -p < table.sql”

This program has been written and re-written about a dozen times (including as I prepared this post) as I searched around for what was the “best” solution.  Originally it started as a hard coded program.  After some iteration I decided to create a configuration file.  That file, called “config.properties” is read in when the program starts.  It specifies:

Here is the file “config.properties.test”: 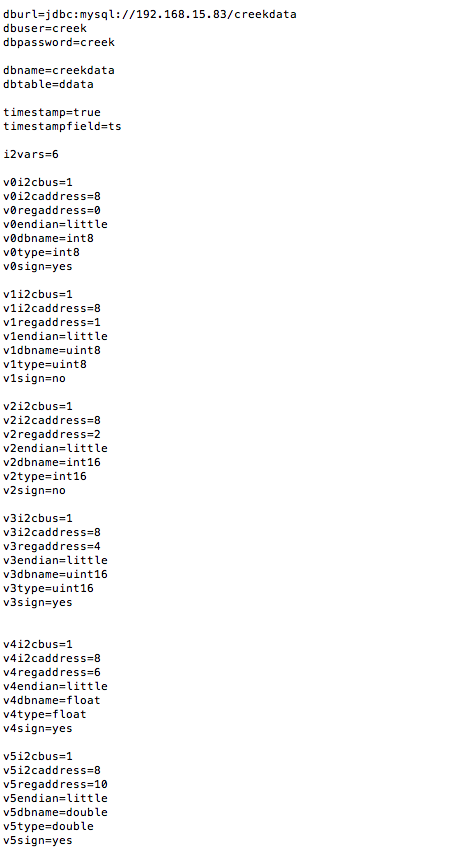 I was going crazy trying to get all of the pieces to fit together (the endian-ness, the sign) and trying to sort out the fact that Java doesnt like unsigned.  So I created firmware for the PSoC that just had one of each test case.  The project is called “debugJavaPi” and is available on the iotexpert github site.  This program just creates an I2C buffer with one of each type of data, then initializes them with known data, then services I2C requests. 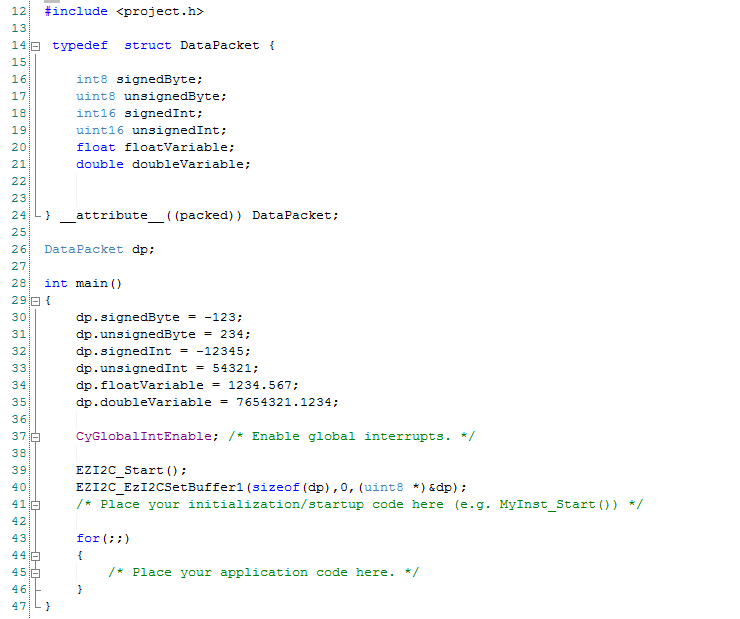 In the next post I will explain in detail the I2CDB Java Program.