After you have the symbol and schematic (look at the previous post) for the Music Player completed, the next step is to build the firmware to actually play the music.  This starts with building the public API in the MusicPlayer.h file.  I am not a musician… not even close.  When I was in 4th grade I tried to take up the trumpet, but the music teacher told me that I was terrible and should stop, so I did.  That was the last time I ever took crap advice from a teacher.

Anyway, I want a simple interface to

Lines 7-10 define the basic type called a Note which is the combination of a frequency and a duration.  To make things simple a WHOLE_NOTE is defined as 64 time units.  So, a half note is 32 counts and a quarter note is 16 counts etc.  You can see some common definitions on lines 20-22.

Lines 12-18 define some common notes which are frequently used to build up songs.  These are all from the middle octave of a piano keyboard.  I found the frequencies from a table on the internet.

Line 24-30 define a list of possible error codes that can be returned by my functions.  Using an enum is much safer than returning an error code with a #define because the compiler makes sure that you actually return a value with meaning.

Line 32-36 defines a Song which is a combination of an array of notes, the number of notes in the array and speed to play the song. 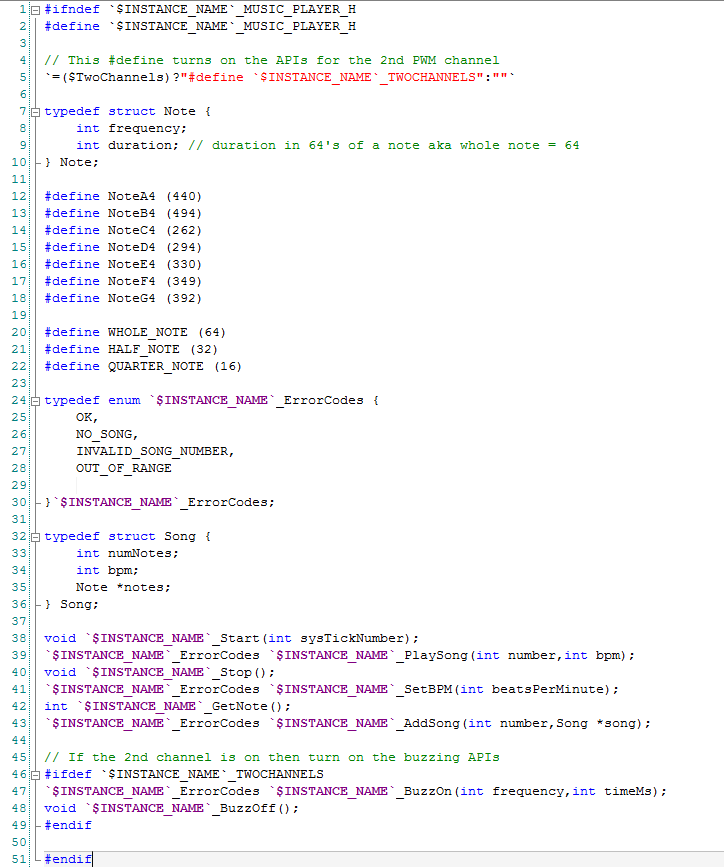 In the next post Ill take you through the firmware.