In the previous post I talked about using JFreeChart to create a plot of the last 8 hours.  I have never been satisfied with only 8 hours but had never spent the time to fix it.  To make matters worse I also wanted to have a website where I could see a list of the the flood events as well as plots of that data.  Well, this week I am going remedy this annoyance, and while I am at it, I am going to fix a bunch of things that I left hanging.

The Elkhorn Creek can do some crazy things.  Here is a plot that I made while I was working on these changes.  This was a spring flood that lasted 304 hours aka 12.6 days: 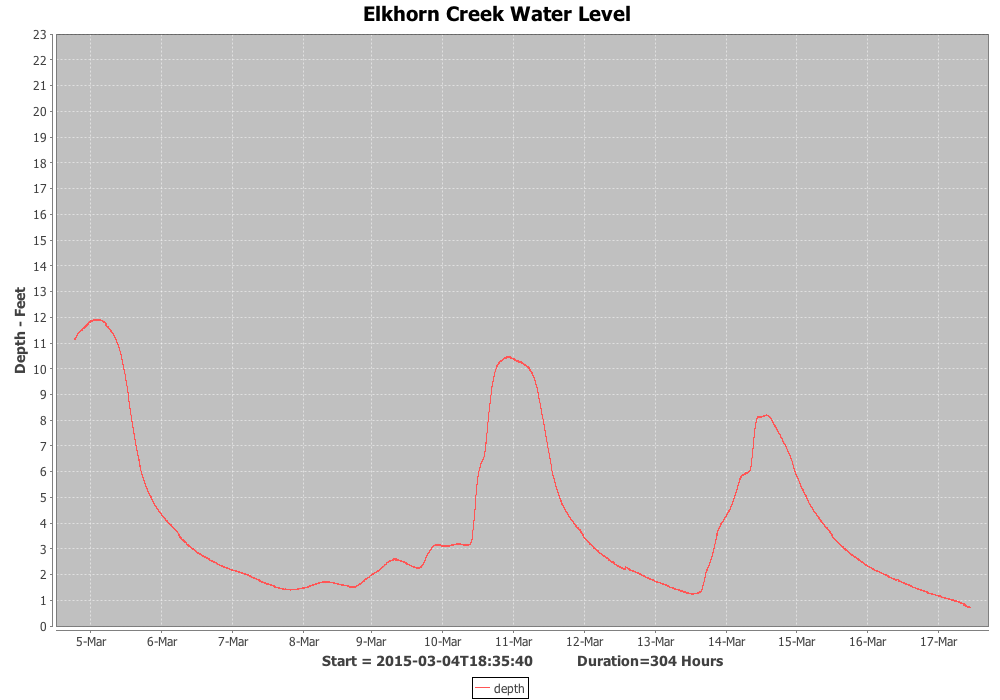 As there are more than 1M records in my database I knew that the Raspberry Pi didn’t have the horsepower to scan the data and create the charts in real time.  The first step was to create a table to hold statistics about the events.  I decided to store a timestamp for the start and end as well as the maximum depth.  Here is the table description:

The program works by implementing the following algorithm. 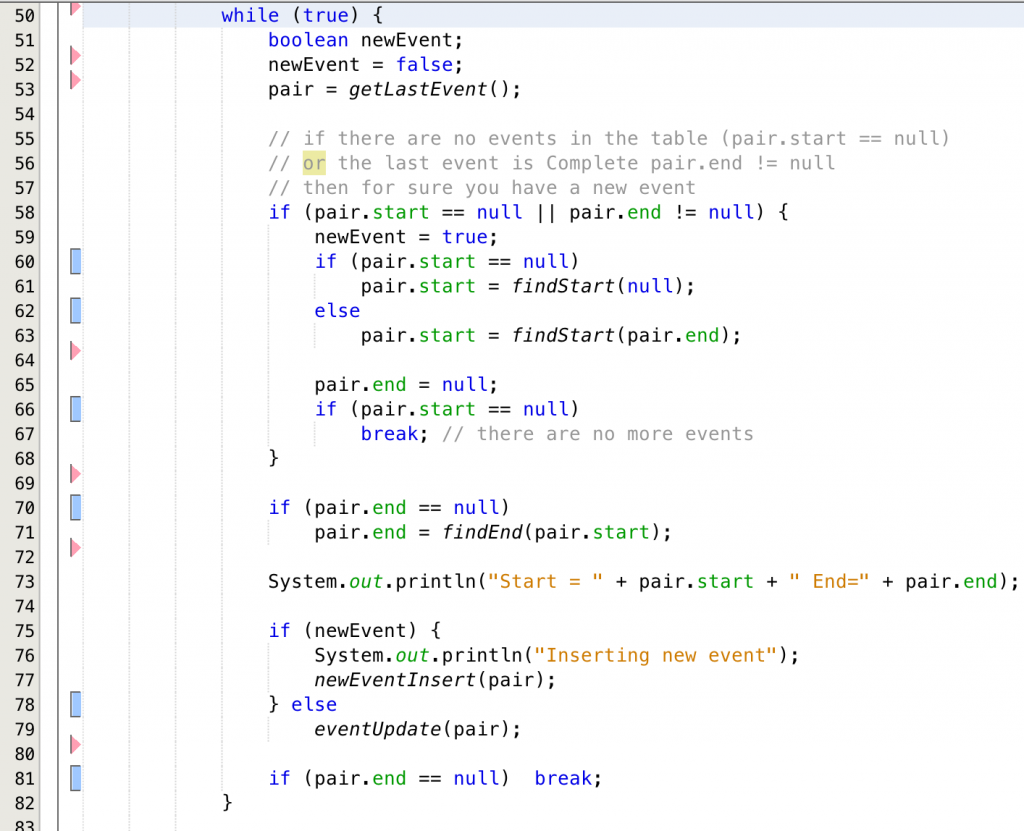 The “findStart” function returns a timestamp for the start of the next event.  If it doesn’t find one then it return null.  The function looks through all of the creek data starting from the beginning [line 149] or after a time [line 151].  My program has a little bit of hysteresis in that it “starts” a flood when it get to 2.0 feet and it “ends” a flood when it gets below 0.75 feet.  If there is a little bit of noise around the upper trip point or the lower trip point it won’t turn on/off. 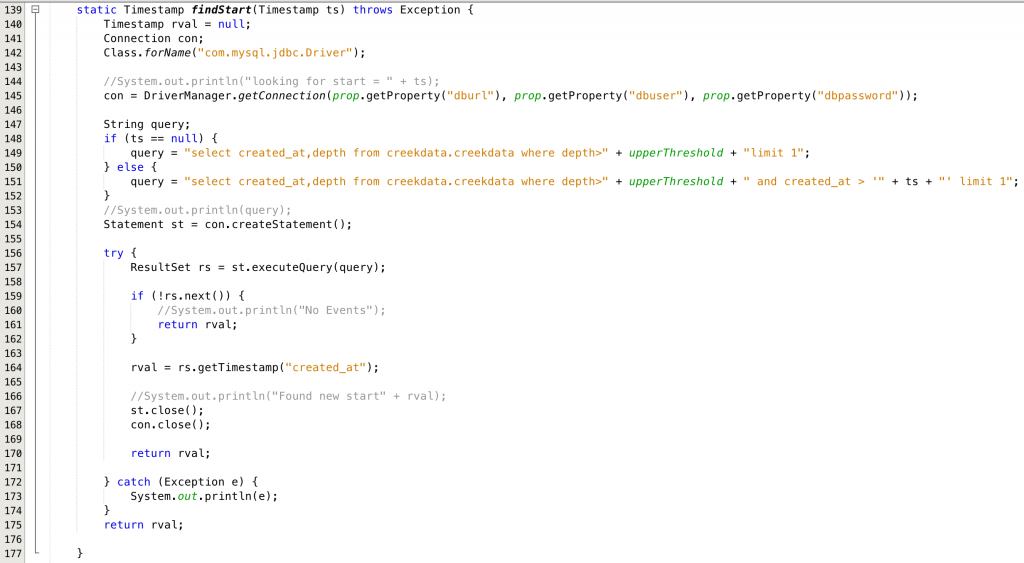 The “findEnd” function returns a timestamp for the end of the current event.  If it doesn’t find one then it return null. 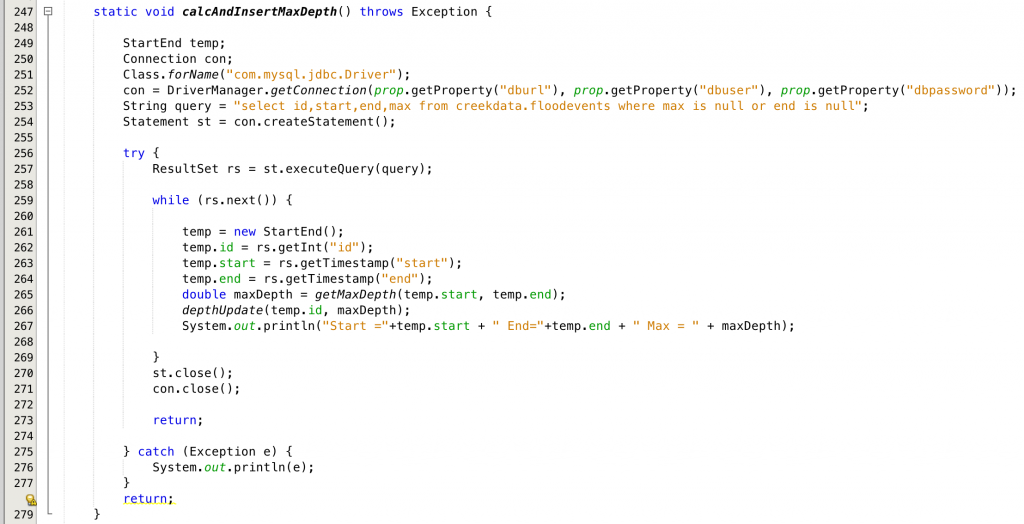 The “getMaxDepthFunction” function uses a feature of mysql that allows you to perform a function during a query.  In this case it looks for all of the data between a start and end and calculates the “max(depth)”.  This query will return only one resultset.  I get the maximum depth value from the result set using the “rs.getFloat(“max(depth)”)”

The “depthUpdate” function takes in an “id” of one of the events and a calculated “maxDepth” then updates the “max” field for that id in the floodevents database.

All of this code is available on the iotexpert github site in the java program “ProcessEvents.java” which is in the “getCreek/src” directory.

In the next post I will talk about all of the modifications to the chart creation program that I made to support creating the flood events charts.