In the previous post I discussed the process that I used to test the bootloader firmware.  In this post I will walk you through testing the actual application firmware.  As I started working on this post I decided to remind myself of the format of the EZI2C buffer.  Here it is:

The first thing that I immediately noticed was that I did something really dumb.  Specifically I named one of the fields “float pressure” when it is really “float inches”. Oh well.  The DataPacket structure is composed of 4 variables, two of them are 2-byte unsigned integers and two of them are 4-byte float.  As this PSoC is an ARM chip, all of the variables are stored in little endian format-meaning that the Most Significant Byte (MSB) is last.

To help test the firmware, I will use a program called the Bridge Control Panel (BCP).  The BCP is delivered as part of the PSoC Creator installation and is available under the Start->All Programs->Cypress menu.  The BCP can talk to a Miniprog 3 (or any of the Cypress programmers) via the USB port and then bridge to the I2C bus.  It can then act as an I2C master- in my case it will be emulating the Raspberry Pi I2C Master.

After starting the BCP, I first configure the “chart->variable settings”.  This allows me to setup names and sizes of the EZI2C registers that I want to read from the PSoC.  You can see that I added one variable to correspond to each variable in the DataPacket structure.  In the BCP, an “int” is the same as an ARM int16 aka a two byte integer.  I also select “sign” to indicate that the tempCenti is int16 (not uint16). 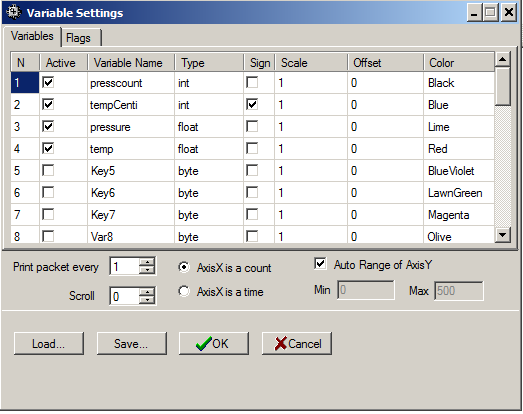 After setting up the variables, I first make sure that the BCP is talking to the PSoC4 by pressing “list” button on the BCP.  When I click that button, the BCP tries to read from all of the 127 valid I2C addresses.  If it gets an “ACK”, then it reports that it can talk to that device.  On the screen below you can see that it sees “address: 10 08” which is the I2C address of my PSoC4.

The next step is to tell the BCP how to read the EZI2C registers.  First I write a 0 to address 8 with the “w 8 0;” command.  This sets the “data pointer” t0 0, meaning the start of the register space.  I then issue command to read 12 bytes, each byte has a name that corresponds to a byte in the “variables” configured in the previous step.  An example is “@0presscount” which corresponds to the least significant byte of the presscount variable and “@1presscount” which corresponds to the most significant byte of the presscount variable. 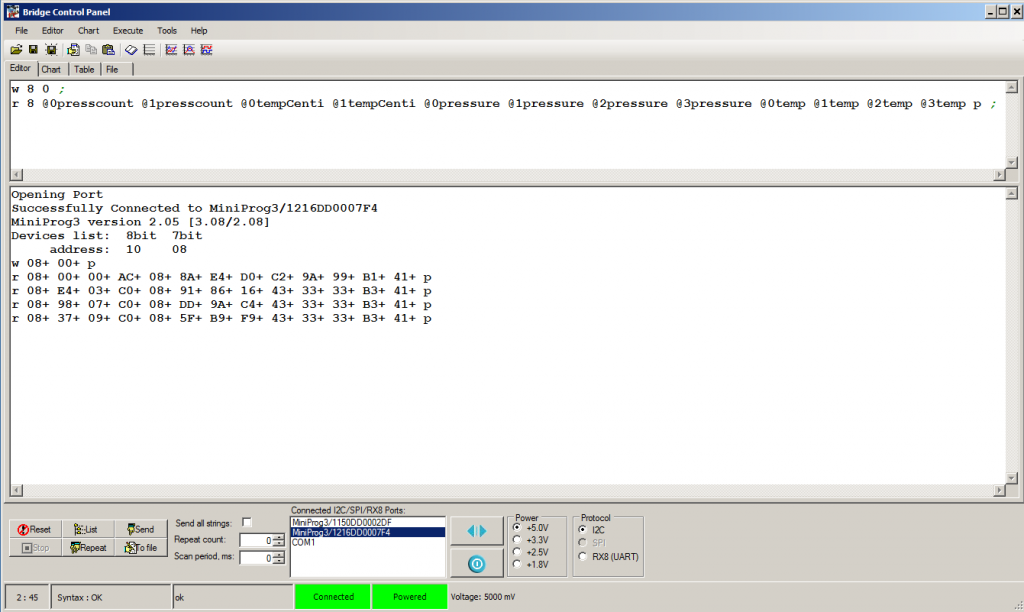 The next step is to attach a bench power supply to the pressure input (I bought this one from eBay).  I will use the variable voltage to simulate different pressures.  Recall from the schematic that the pressure sensor acts as a current source that is then driven into a 51.1 ohm resistor.  Here is the schematic: 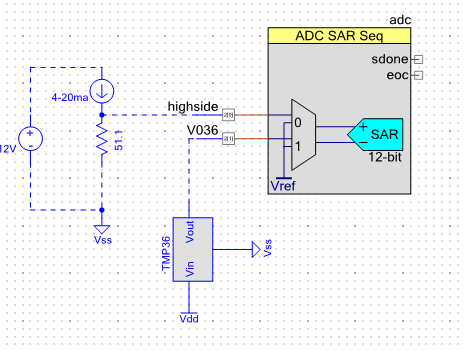 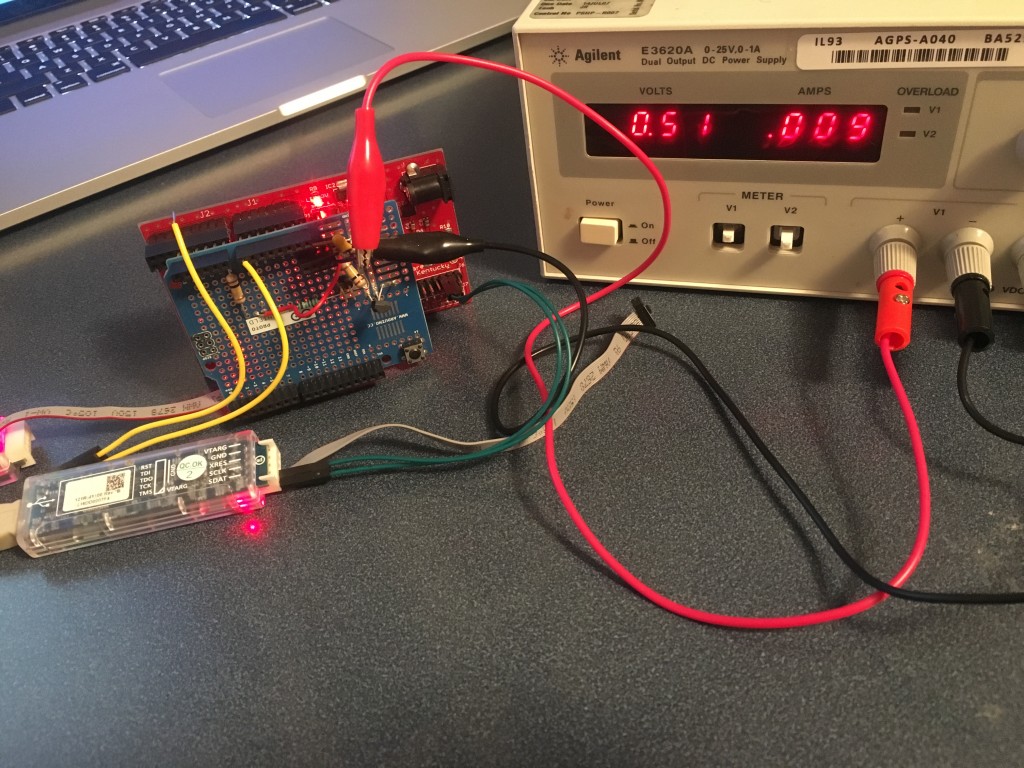 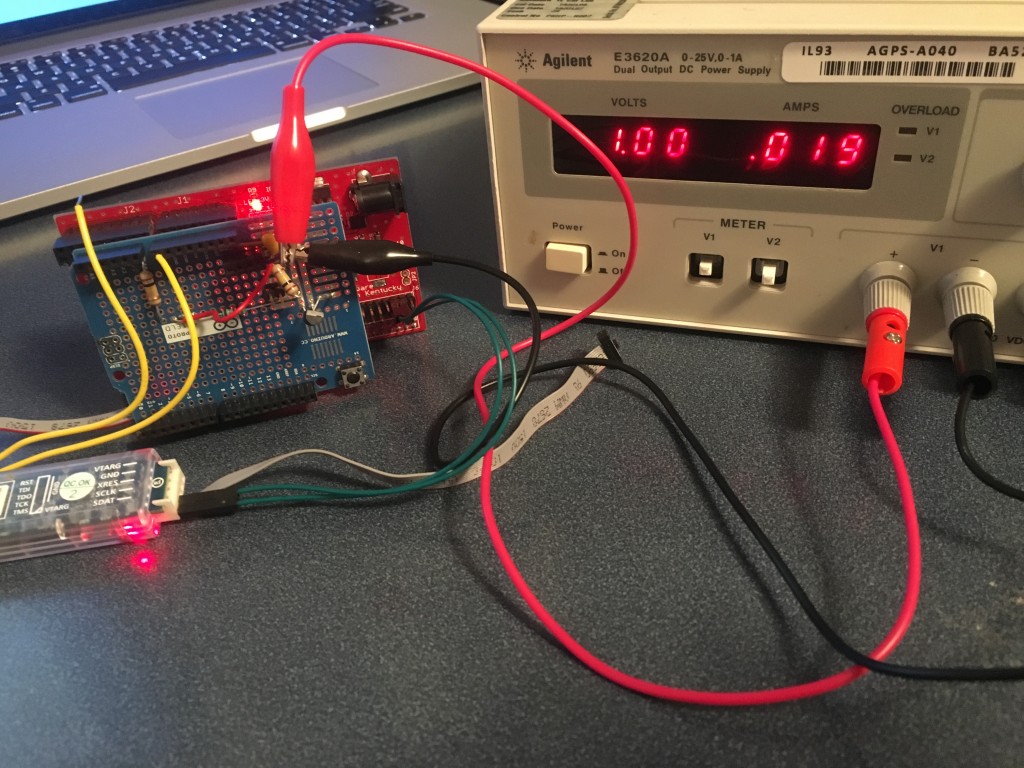 In the next test I will go into graphing mode and use the “repeat” button to run I2C reads as fast as possible.  I will then sweep the voltage on the bench power supply and plot the pressure and the counts to make sure that makes sense.  It looks good, here is the plot: 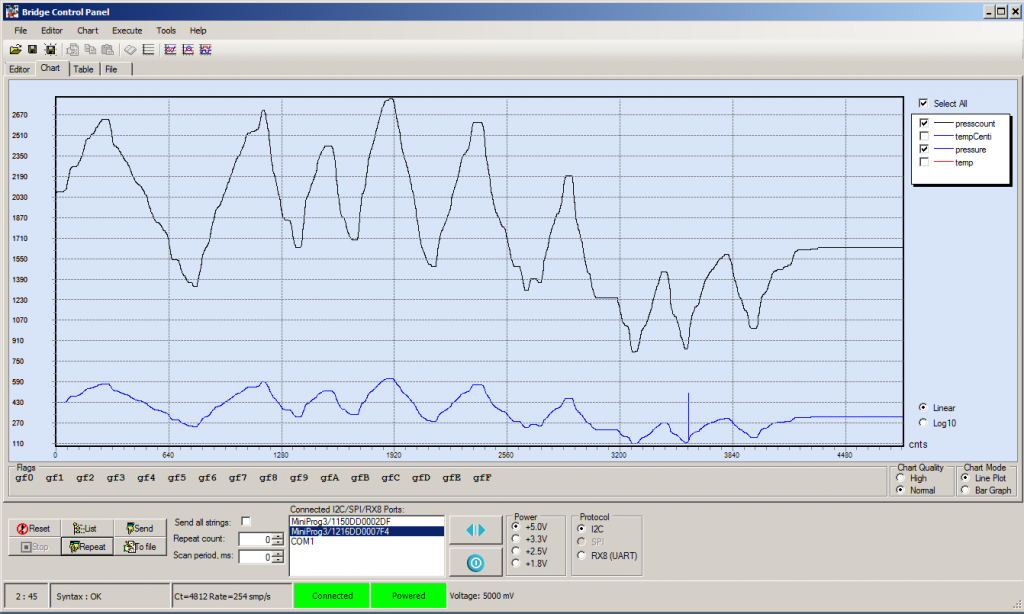 In the next test I use a Fluke Thermocouple to verify that the TMP036 is reading the correct temperature.  You can see that when I put the thermocouple right on the sensor it reads 23.4 degrees C.  I then turned the camera towards the screen and took a picture of the plot.  In that plot you can see the temperature bouncing around 22.5.  The bounce is  +- 1 count (literally noise) of the ADC .  I am not sure what the cause of the 0.9 degree difference between the Fluke and the TMP036, it could be several things including the accuracy of the TMP036, the accuracy of the Fluke, the accuracy of the PSoC4 ADC, where I am measuring, etc.  But less than a degree really doesn’t matter to me. 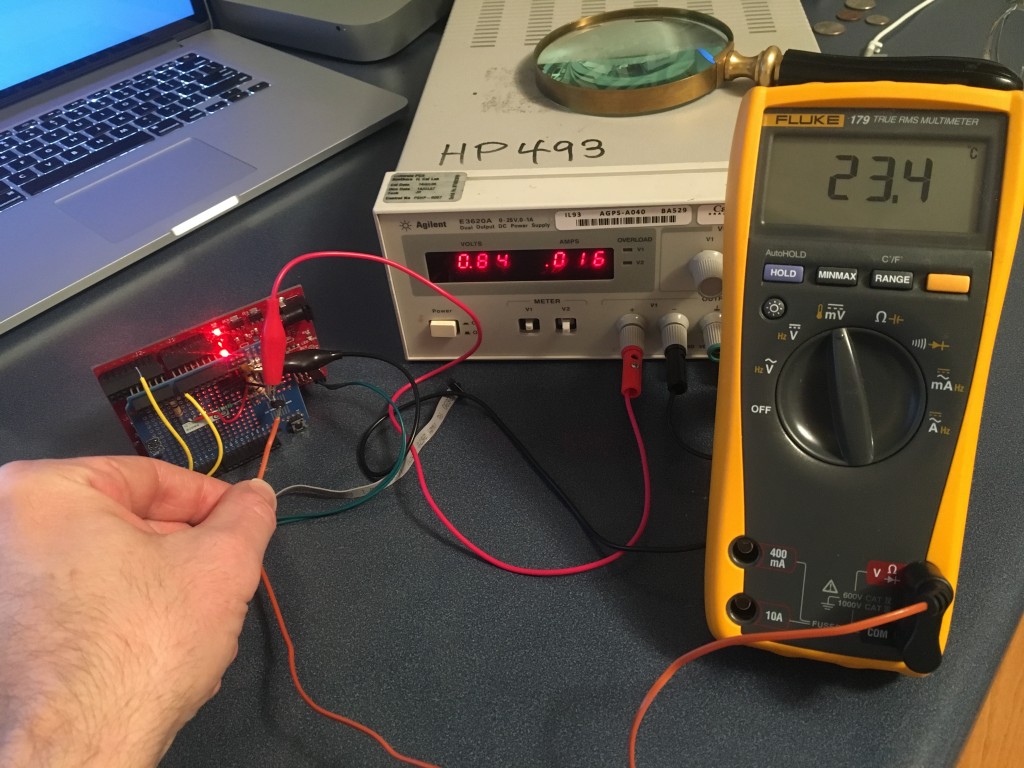 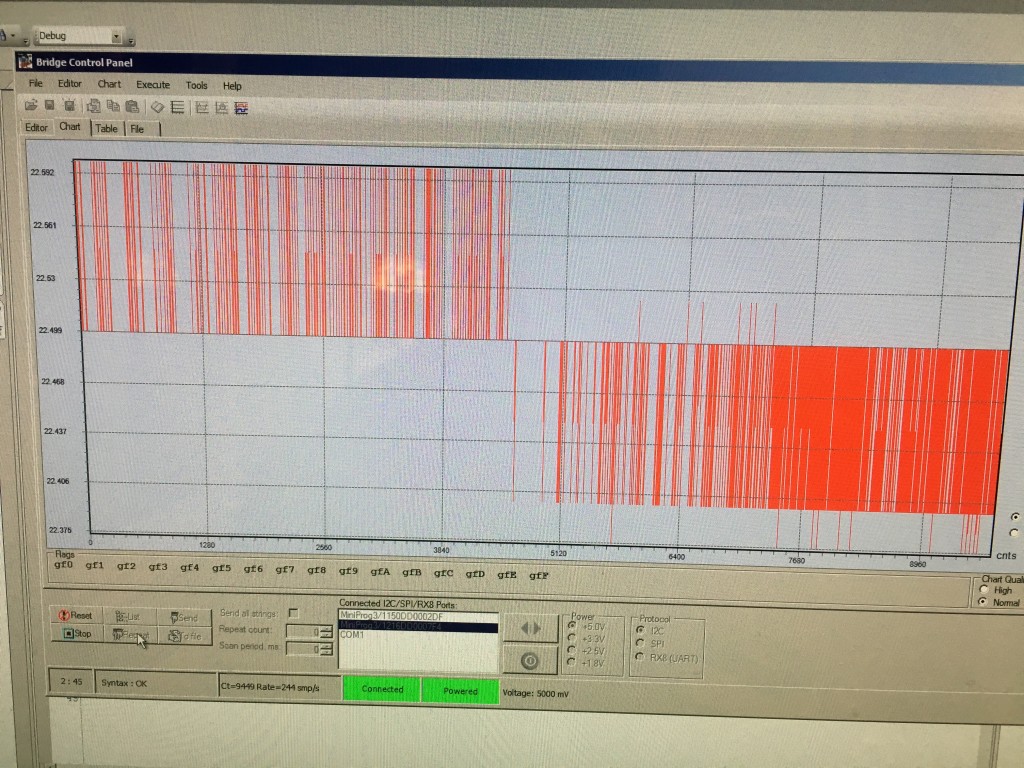 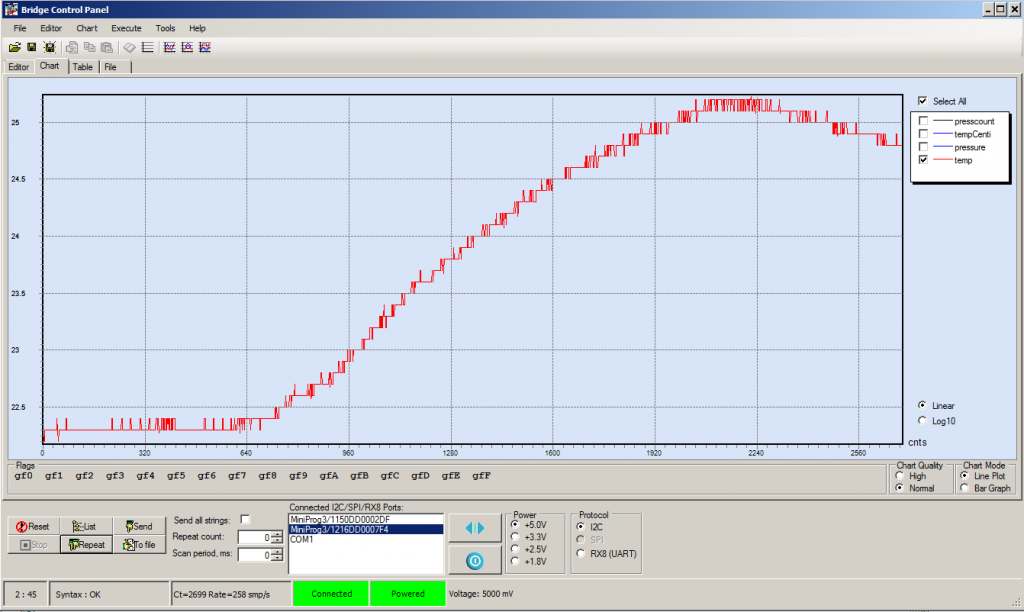 At this point it looks like the bootloader is working and that the PSoC 4 firmware is working.  In the next post I will talk about the overall server software architecture. 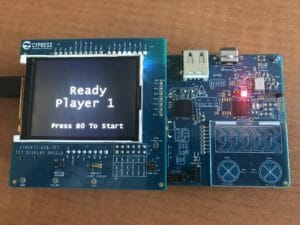