For our first project, I am going to stand on the shoulder of giants.  In 1978, Brian Kernighan and Dennis Ritchie published “The C Programming Language”.  Here are pictures of my copy. 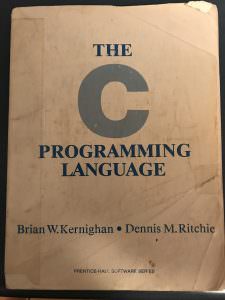 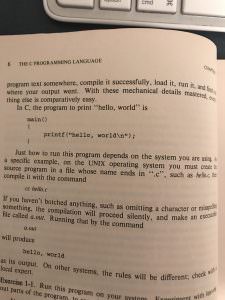 The reason you do “Hello, World” is that you want to make sure that your compiler chain, programmer etc are all working correctly with something that is super simple.  The only change that I will make to their classic program is to add the “Blinking LED” which is the embedded developers version of “Hello, World”.

The concepts that I want to show in this lesson are.

To make this first project the steps are:

DO NOT DO File->New Project

I always hate to start with a negative statement… but DO NOT make a file project by doing File->New Project.  This is used for creating a new Eclipse project, not a new WICED Studio project.  In WICED Studio we use the make external build system.  If you do File->New Project all hell is going to break loose.  So don’t do any of the things on this menu:

Now lets get on with making a WICED Studio Project.  First create a new folder to hold the projects for the Class in the “Apps” folder by right-clicking and selecting New->Folder 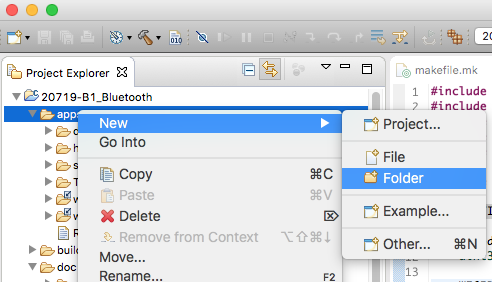 Give it the name “wiced_bt_class” 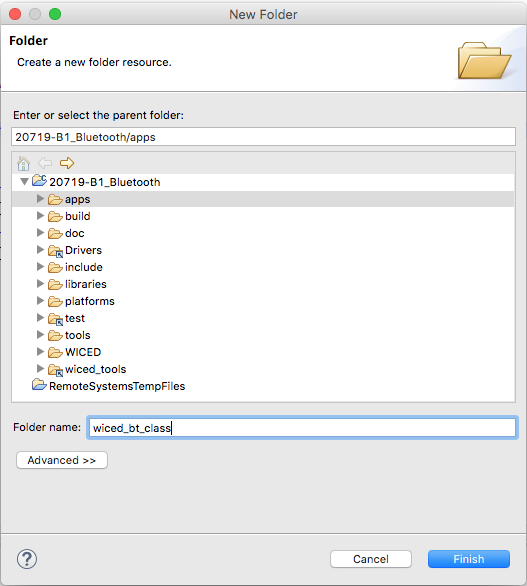 Create a folder to hold the first project called L2_HelloWorld 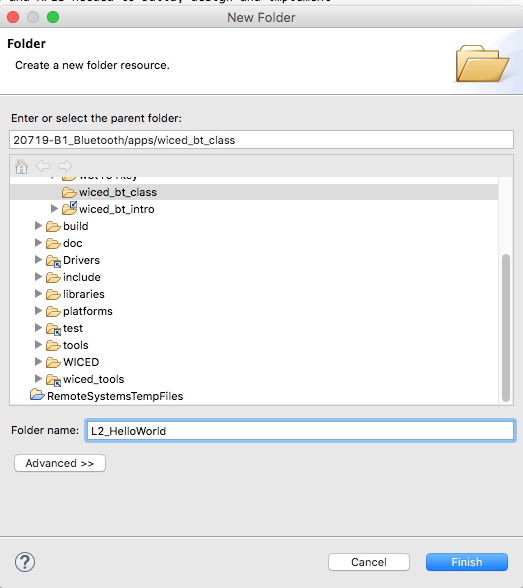 Give it the name L2_HelloWorld.c 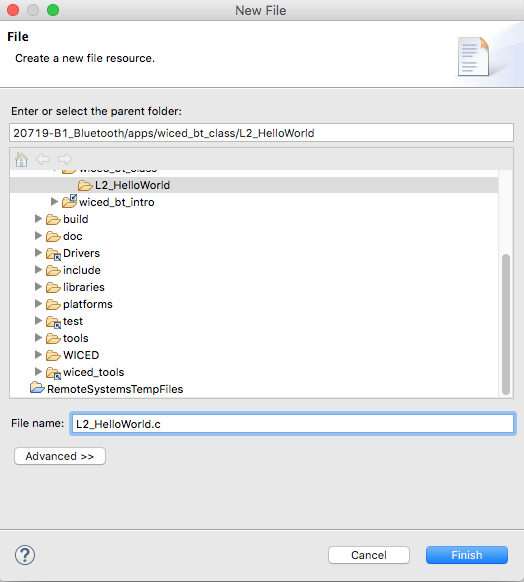 Make a new file called makefile.mk by right clicking on the L2_HelloWorld directory and selecting New->File

and giving it the name makefile.mk 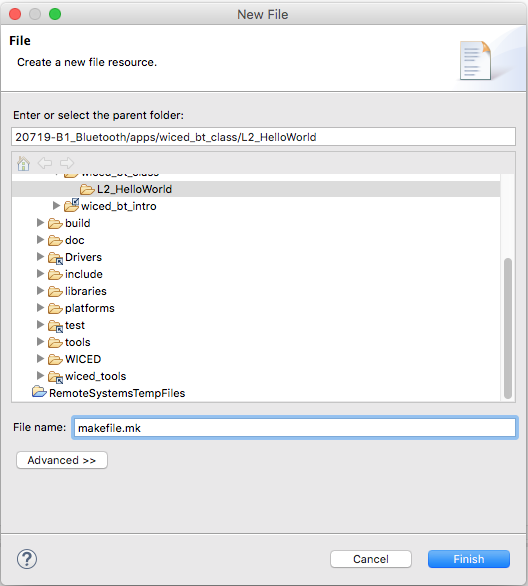 Add some code to the L2_HelloWorld.c

Add the secret incantation to the makefile.mk 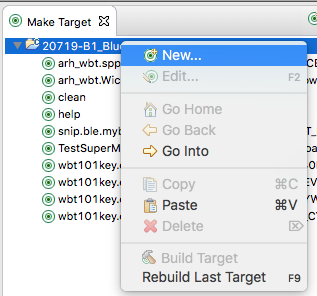 The make target has a VERY specific format.  It is: 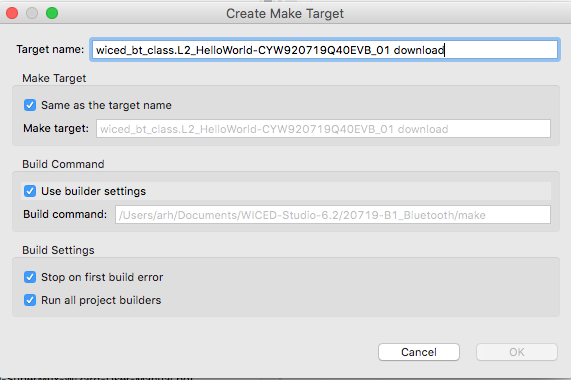 Connect the Development Kit To Your Computer

One of the key things that the WICED HCI UART is used as is a UART to download new code to the bootloader.

The PUART is used as a general purpose serial port.  When we call this function it causes all of our “WICED_BT_TRACE” outputs to go to the the PUART.

You can see these two UARTs on a PC by running the device manager. 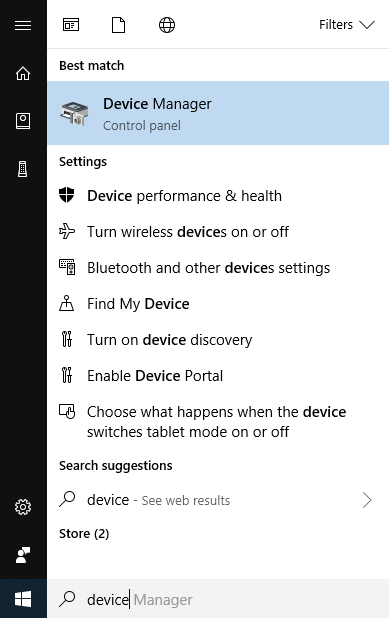 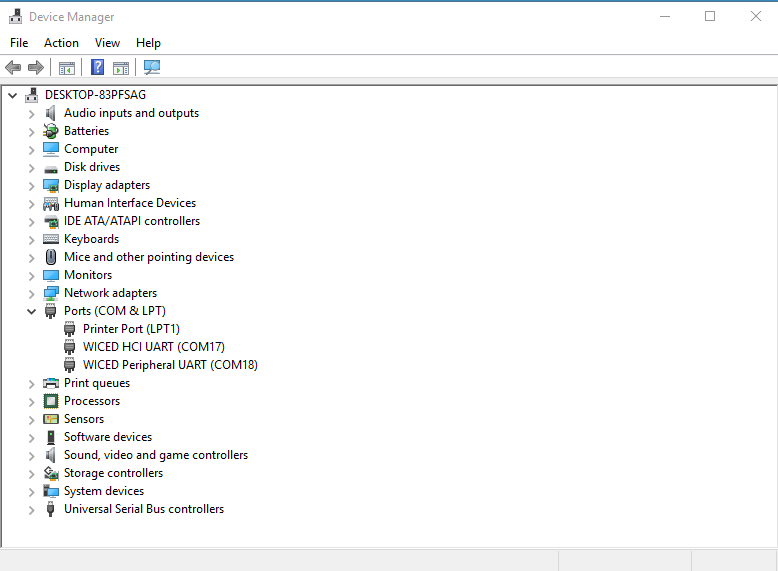 On my Mac I use the program “Serial” which I downloaded from the App Store. 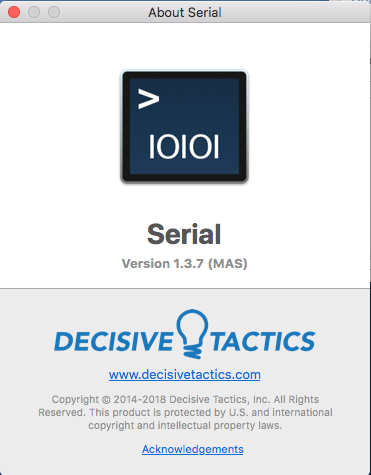 When I run Serial and then to open a Port 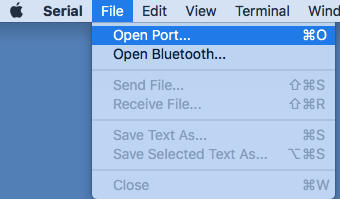 You can see the two UARTs. 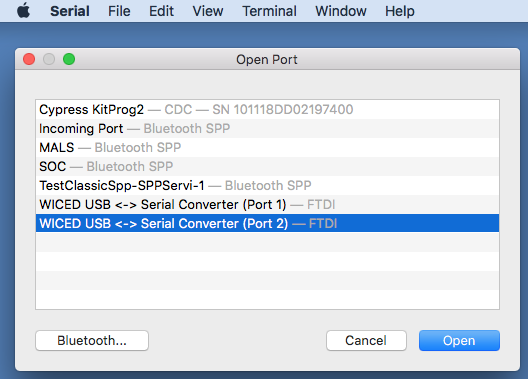 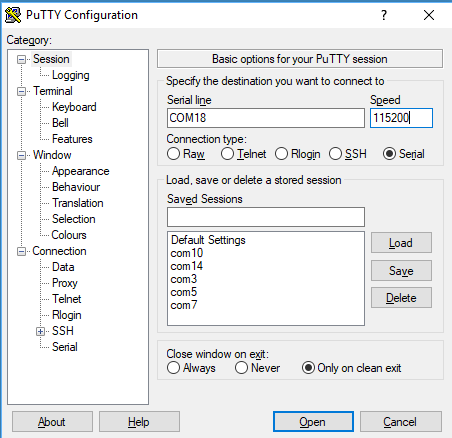 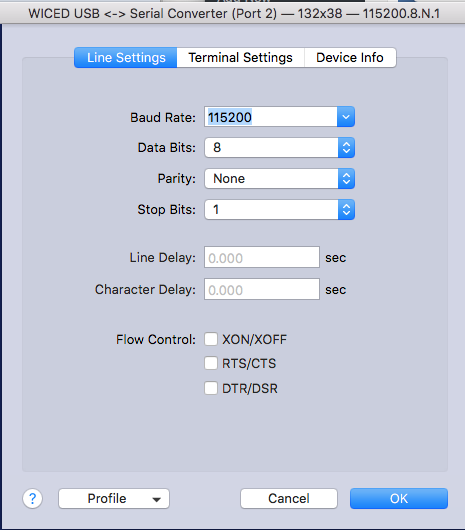 In the Make Target window you should see a bunch of “targets”.  You probably have a bunch more targets, which came in your installation of WICED Studio by default, but I deleted a bunch of them so I could just see the ones that I created.

To build and program your project, double click the make target we made before.

When you look in the console you should see something like this: 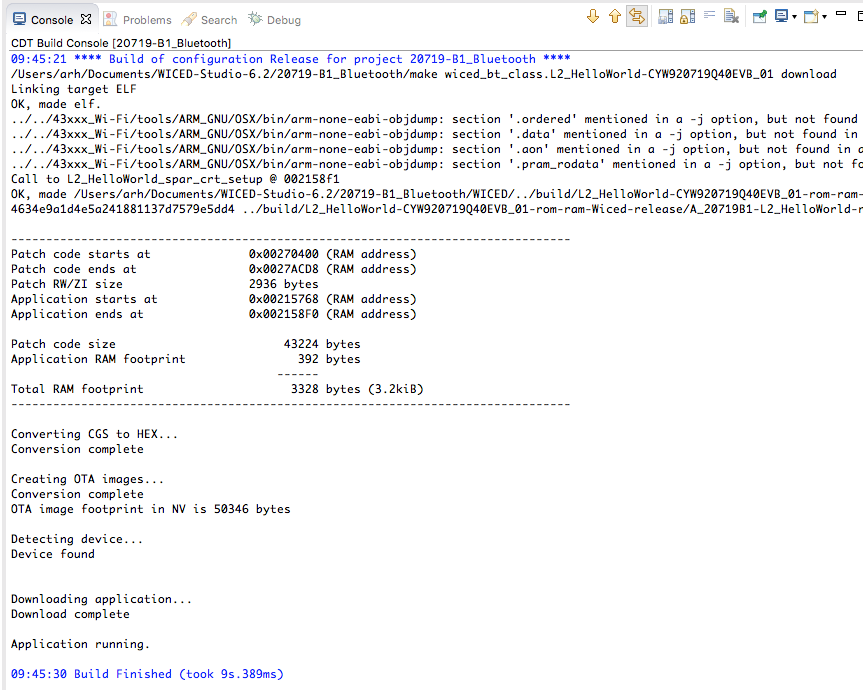 And when you look at your serial terminal you will see this: 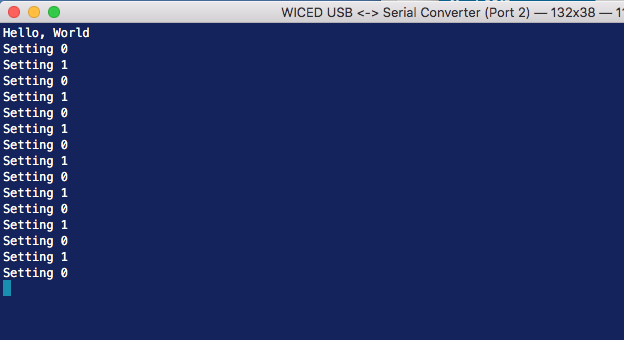 And you should also see the blinking LED!!!

If you get this message there are three posibilites

Check the first two… and if that doesnt work then what this means is that the bootloader is not listening on the WICED HCI UART.  In order to fix this you need to press reset and hold down the button called “Recover”.  Then release the reset, then release the recover button.  What does this do?  Simple, when the chip comes out of reset, if the recover button is pressed, the chip starts the bootloader instead of the main application.

Here is a picture of the bottom corner of the board.  The button circled in Green is the “Recover”.  The button in Red is “Reset” and the Blue surrounds the LED circuit. 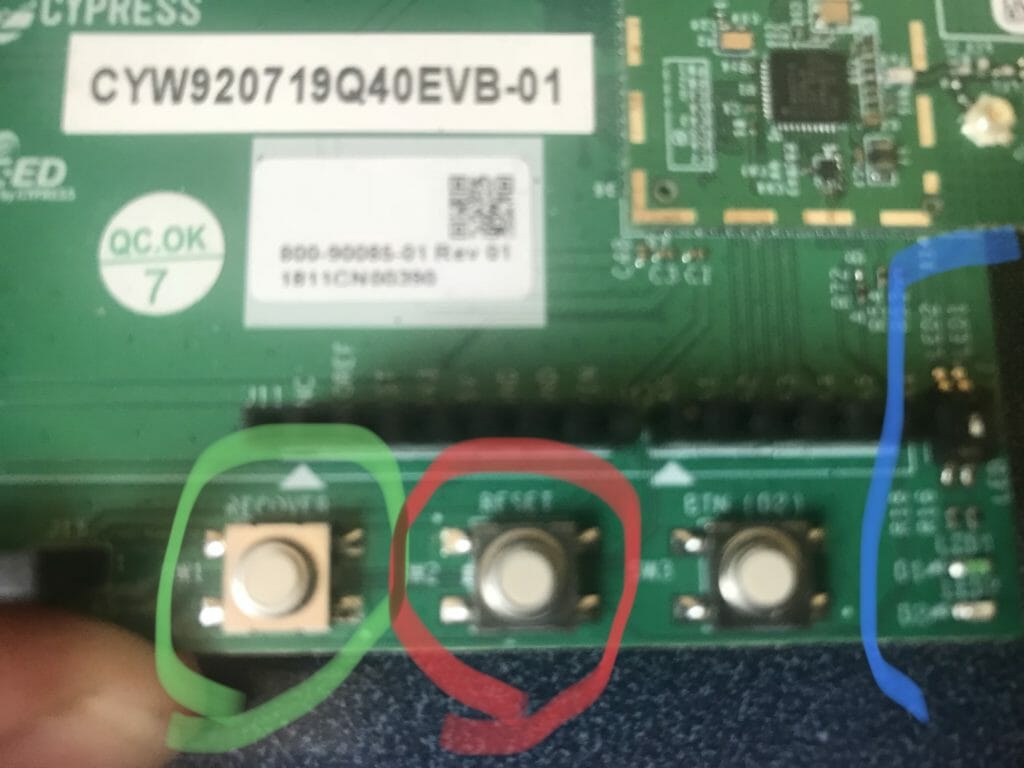 The two LEDs are labeled LED1 and LED2.  LED2 is the Red one, LED1 is the Green one.  The dip switches circled in Blue connect or disconnect the LEDs from the CYW20719.  In my case you can see (barely) that the switch is set to On.  Both of these LEDs are active LOW (0 turns them on) 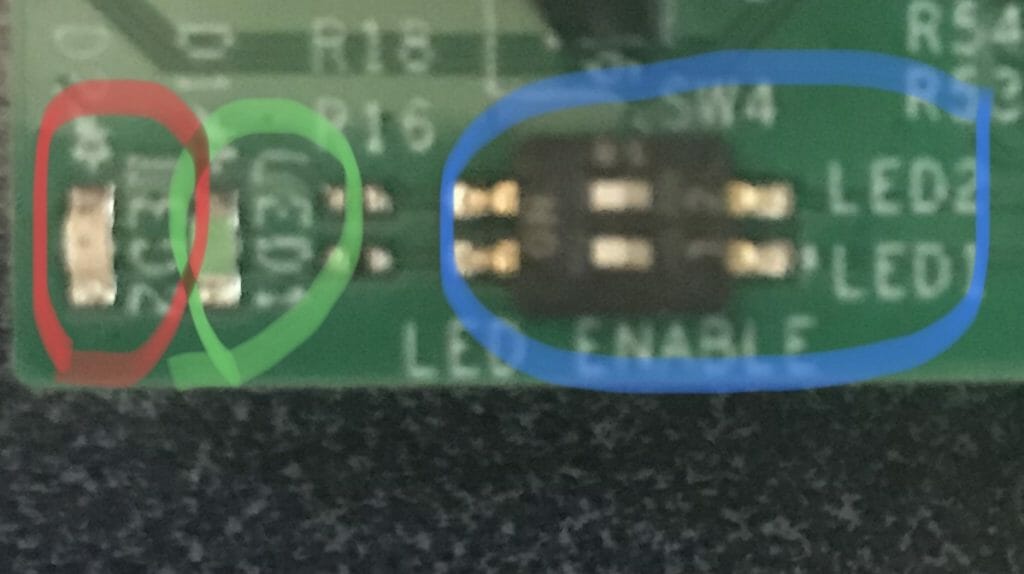 Lesson 1 - WICED Bluetooth: A Tour of the Resources