In this article I will walk you through creating a library for ModusToolbox 2.0 that will glue the Cypress RTOS Abstraction layer, emWin, the SSD1306 and the PSoC 6 together.  In the end, the library will become available in the Modus Toolbox Library Manager by creating a Super Manifest file.

NOTE:  This blog was originally written about the Modus Toolbox 2.0 library scheme.  With the release of Modus Toolbox 2.2 this scheme was changed and this blog is now obsolete! Instead, you can use the Infineon display-oled-ssd1306 library.

I like using the Segger emWin graphics library.  And, I have always hated getting the “glue” into my project that makes the library work.  The glue includes the configuration files for emWin plus the hardware driver functions to talk to the SSD1306 screen.  I have always thought that it would be really nice to have a simple library scheme – yes I know that there are lots of schemes out there but I wanted one that was neatly integrated into our tools.  Well, with ModusToolbox 2.0 my wish was granted.

For this article I will create a library called “p6sdk-ssd1306-emWin-freerots-config” which will contain:

The SSD1306Driver.h provides a public interface for these functions which are used in the LCDConf.c file.

The first part of SSD1306Driver.c makes a pointer to and Cypress HAL I2C object.  In the initialization code, it connects the provided I2C object and the static pointer.  The purpose of this is to allow the application developer to use the I2C for other devices on the bus, in other words the I2C bus is shared.  On most of my screens the I2C address is 0x3C,  so I let the user not provide an I2C address.  Probably in hindsight I should have just made them always provide an I2C address.

In order for emWin to update a display it needs to be able to write data to the display via “commands” and “data” writes.  However, it doesn’t know anything about the fact that these displays are typically attached via I2C.  The function SSD1306_WriteCommandByte uses the Cypress HAL master write API to send a command byte to the display.  This function is called by emWin via the configuration in LCDConf.c

And the write data byte function works exactly the same way as the write command byte, except it send a different first byte.

I have written extensively about how to configure emWin and specifically how to setup the files for the SSD1306.  You can see the articles here.  So, I am not going to describe those files in detail except to say that the ones that you need are GUIConf.h/.c, LCDConf.h/.c and GUI_X_CYRTOS.c.  The only changes from the previous configurations of LCDConf.c is to hookup the APIs we defined in the previous section.

I checked in all of these files into GitHub at git@github.com:iotexpert/p6sdk-ssd1306-emwin-cyrtos-config.git  Now they can be used as a Modus Toolbox library. 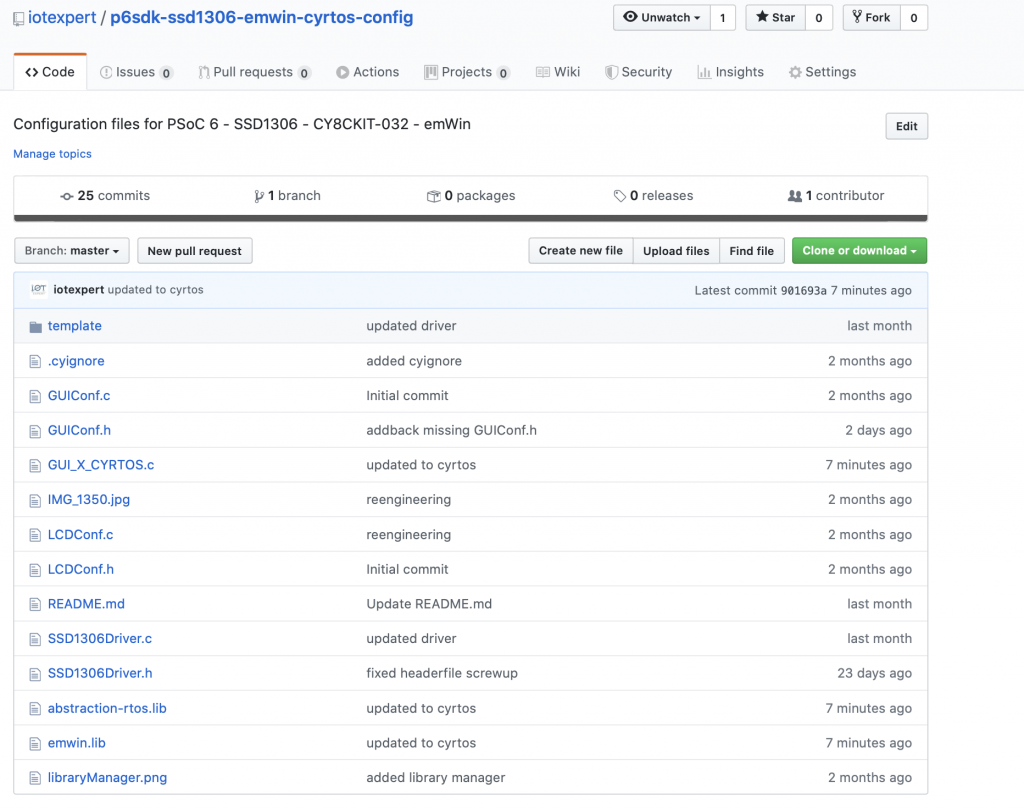 Lets build a test project.  Start by creating  new project.  Notice that I am not using the built in project creator, but a standalone project creator which does not require Eclipse.  This is automatically installed for you as part of the Modus Toolbox installation (so, if you are one of the legions of people who don’t like Eclipse you don’t have to use it).  Run it from the start menu. 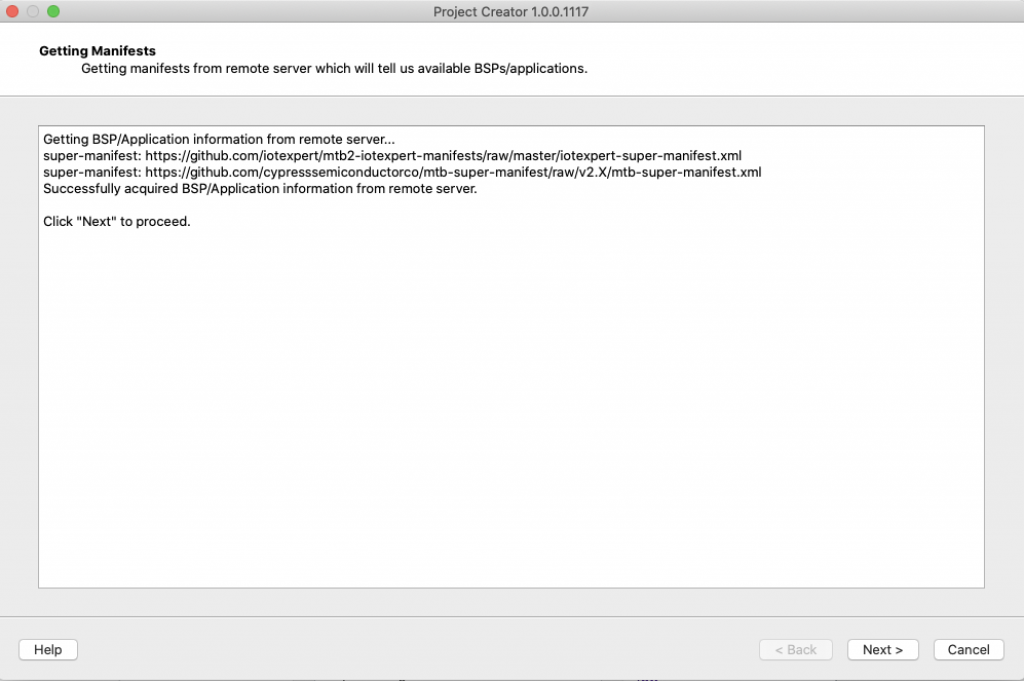 For this demo I will use the CY8CKIT-062-WiFi-Bt kit… but this works on all of of our PSoC 6 kits with Arduino headers. 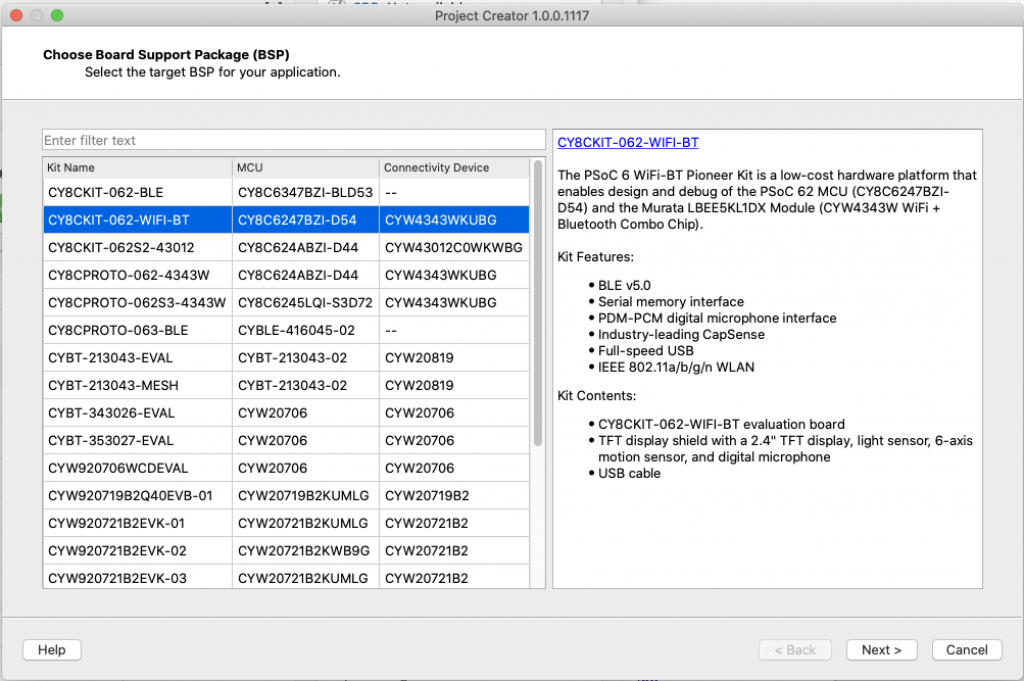 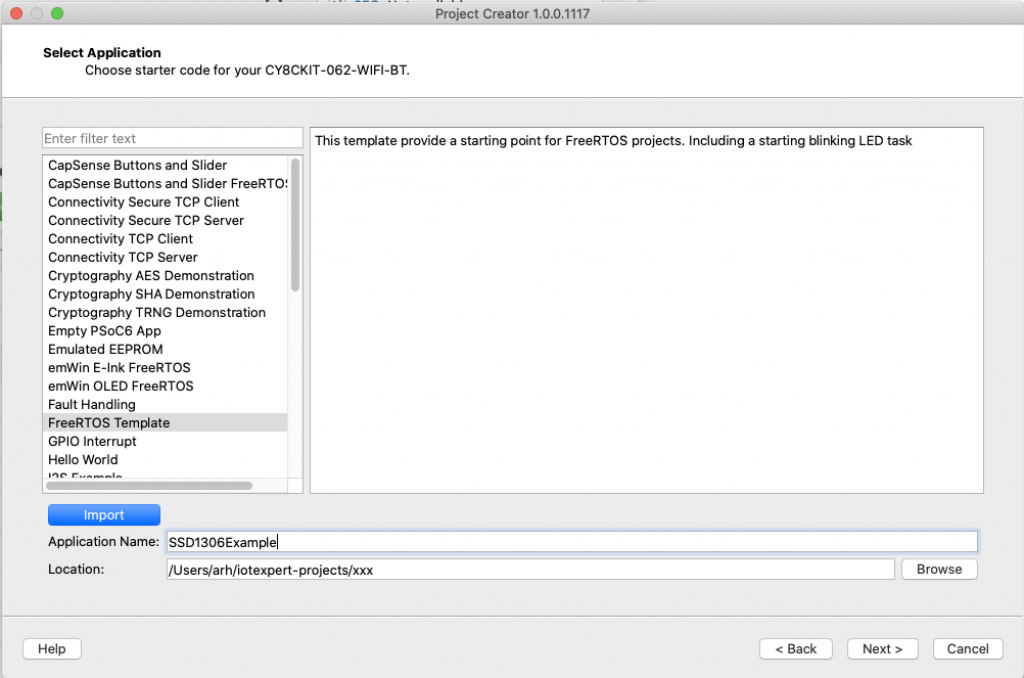 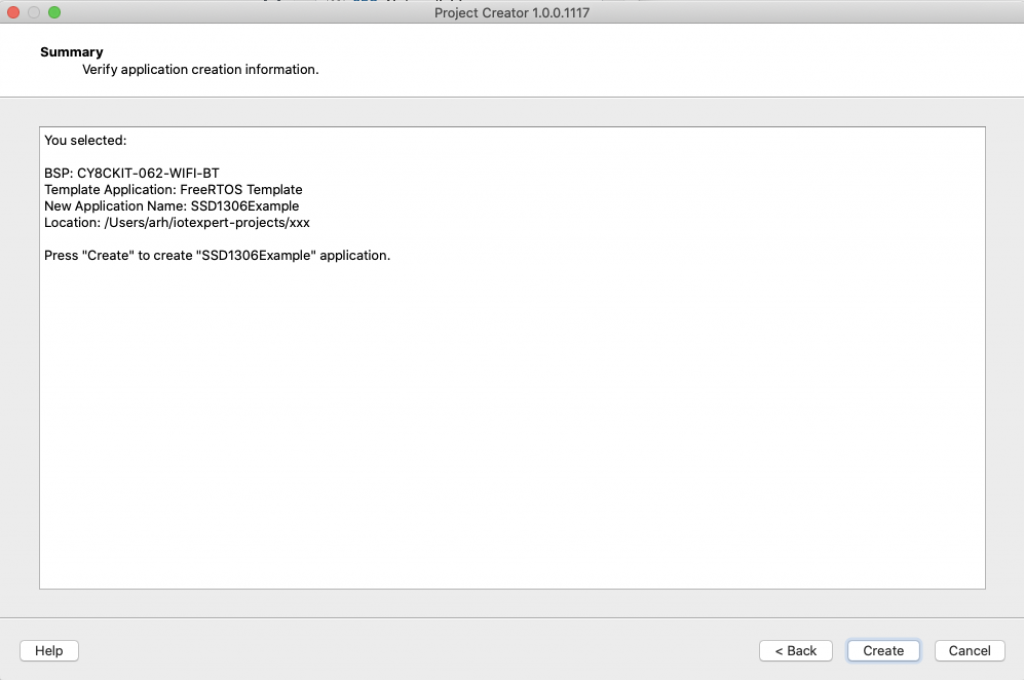 And our software will do its thing. 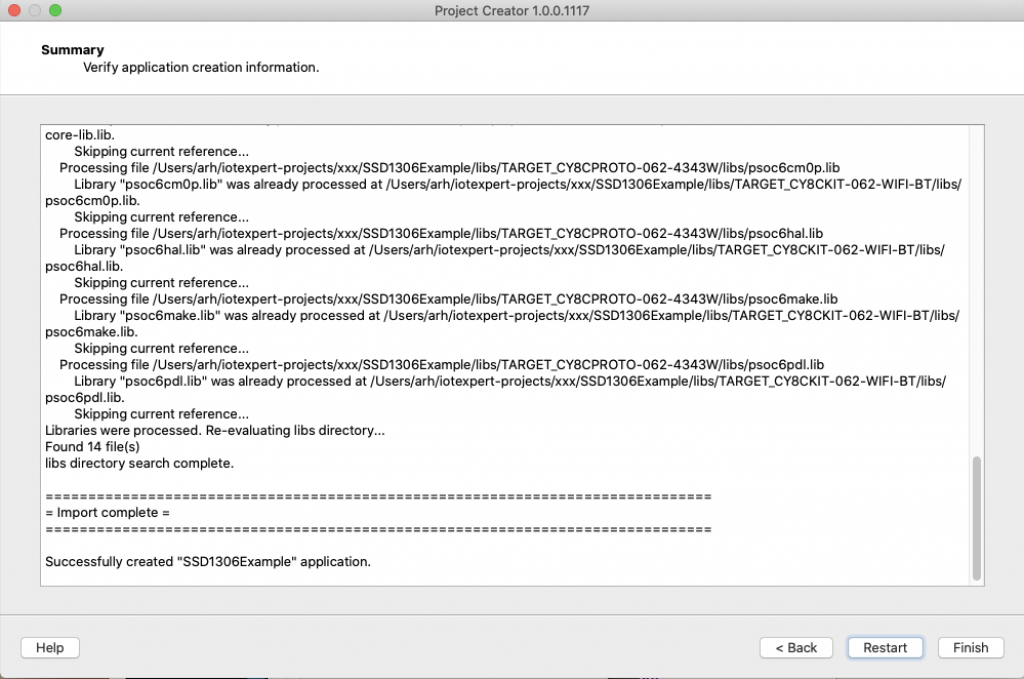 Now if I look in the directory, I will have a complete project. 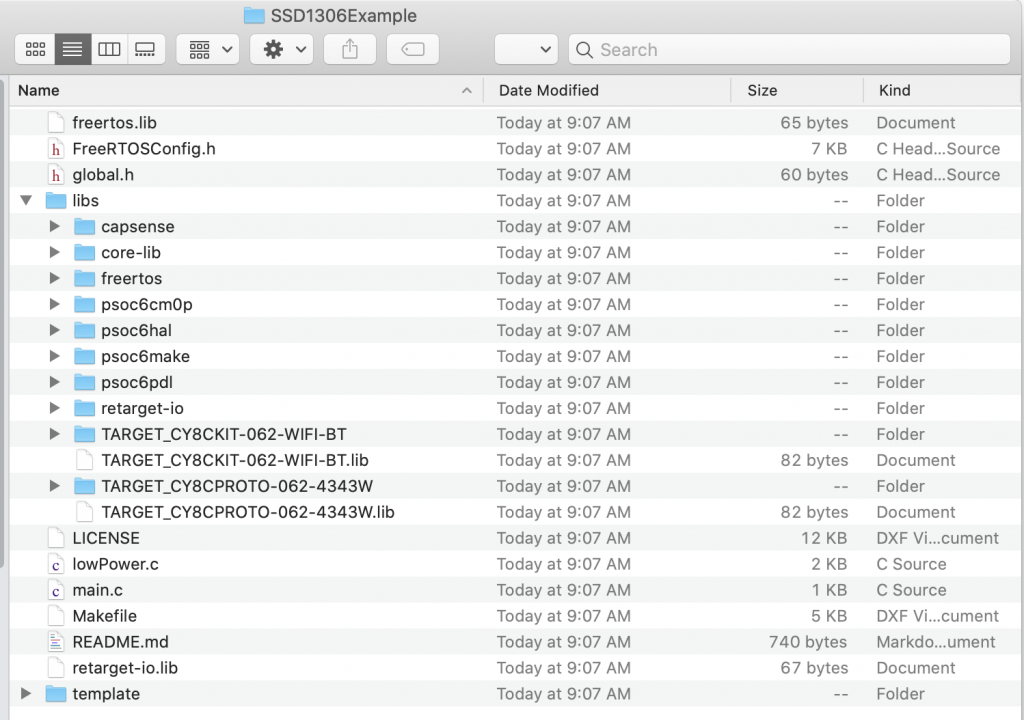 Now lets manually add the .lib for the p6sdk-ssd1306-emWin-cyrtos-config.  You can use whatever editor you want, but it’s emacs for me. 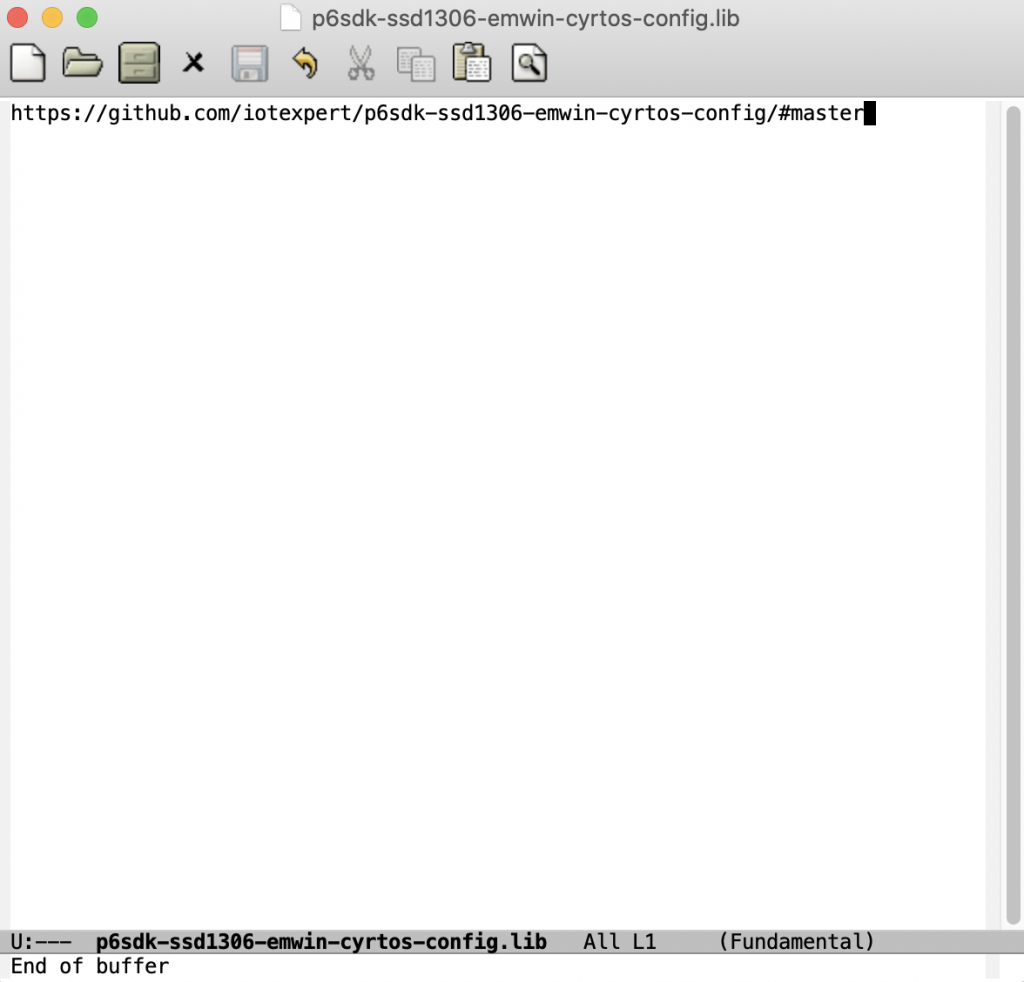 Now that the file is updated you can run “make getlibs” which will search for all of the “.lib” files.  Then make sure those libraries are part of your project. 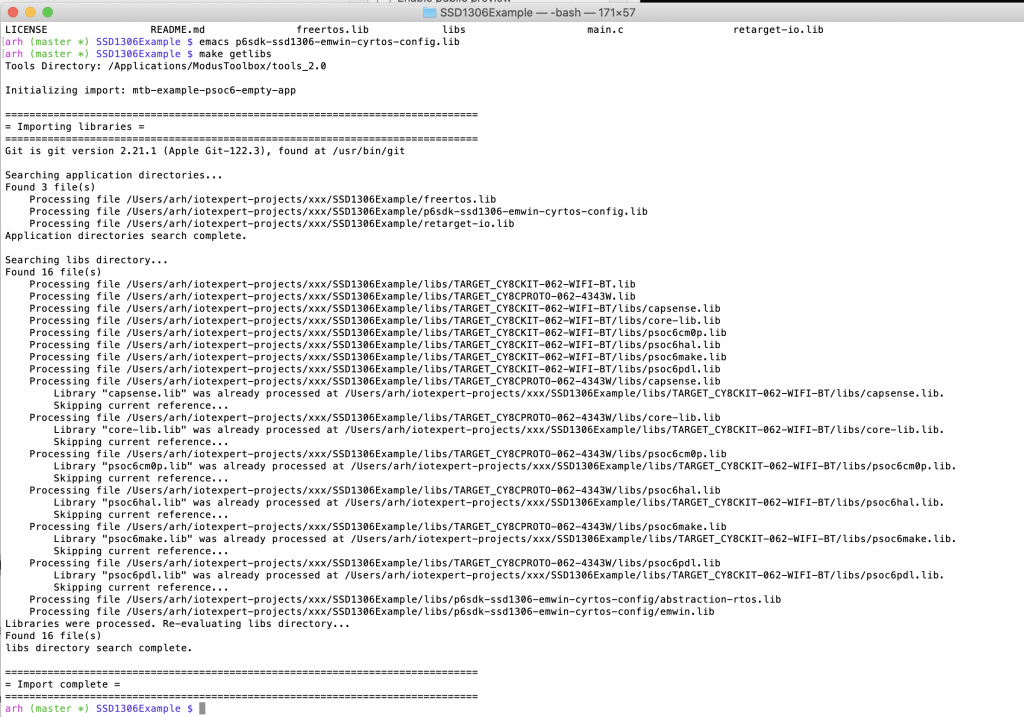 After the make getlibs is run you can see that the p6sdk-ssd1306-emWin-cyrtos-config directory is in your libs directory, with all of the stuff you need. 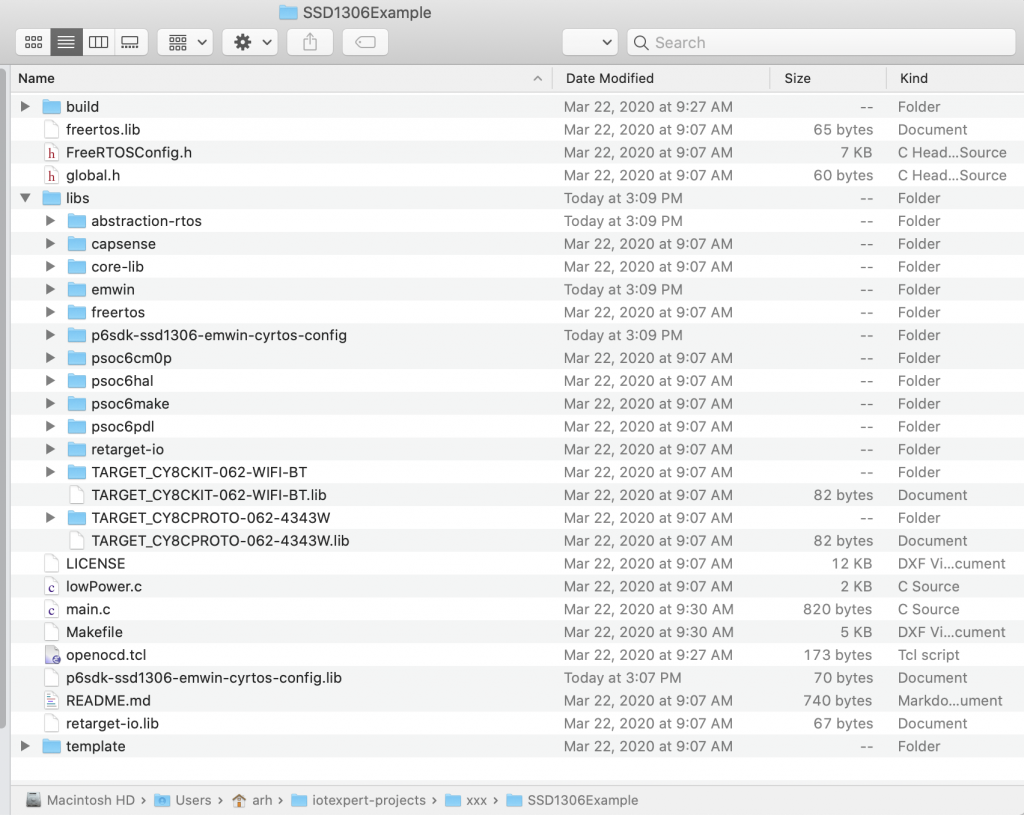 The next step is to edit your main.  I like to use vscode.  If you run  “make vscode” our build system will create a vscode project for you.  You can start vscode by running “code .”

Before the emWin library work you will need to add the EMWIN_OSNTS and FREERTOS components to your Makefile. 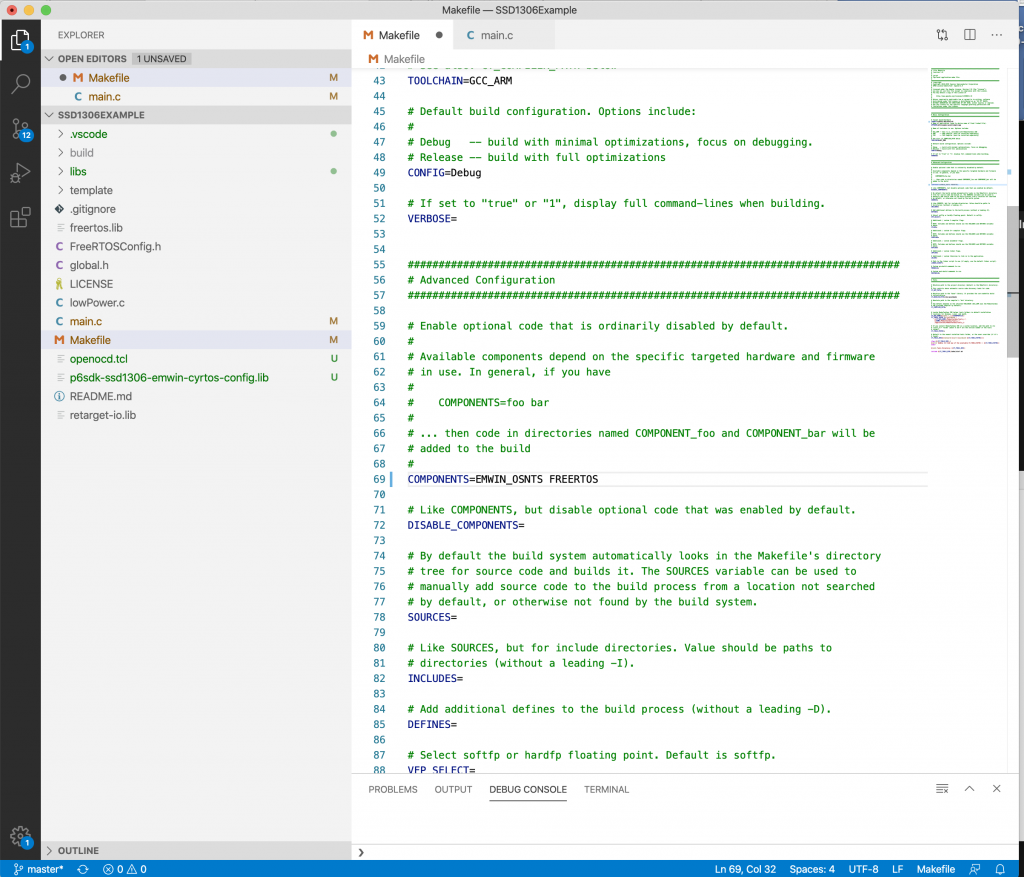 Now, write the your main.c code to display a little message. 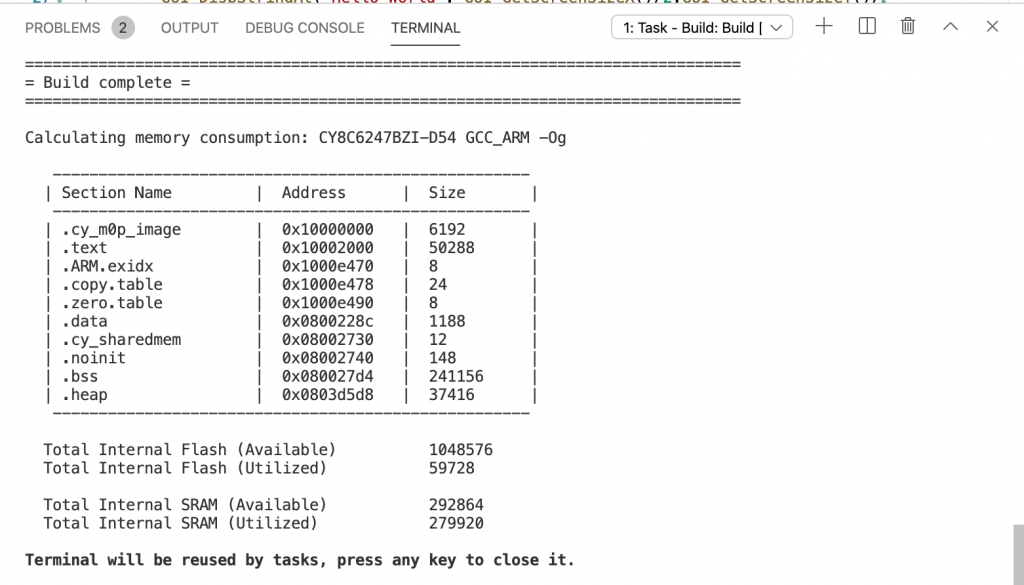 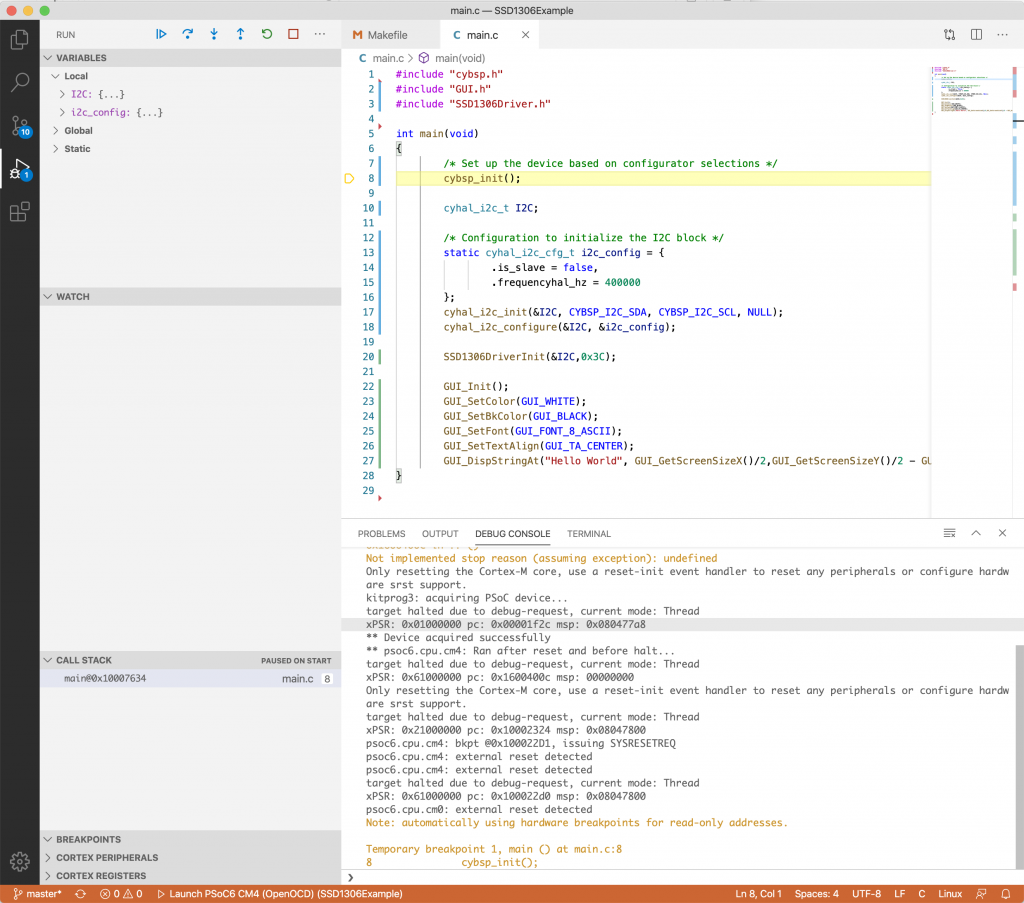 Or on the command line you can program with “make program” 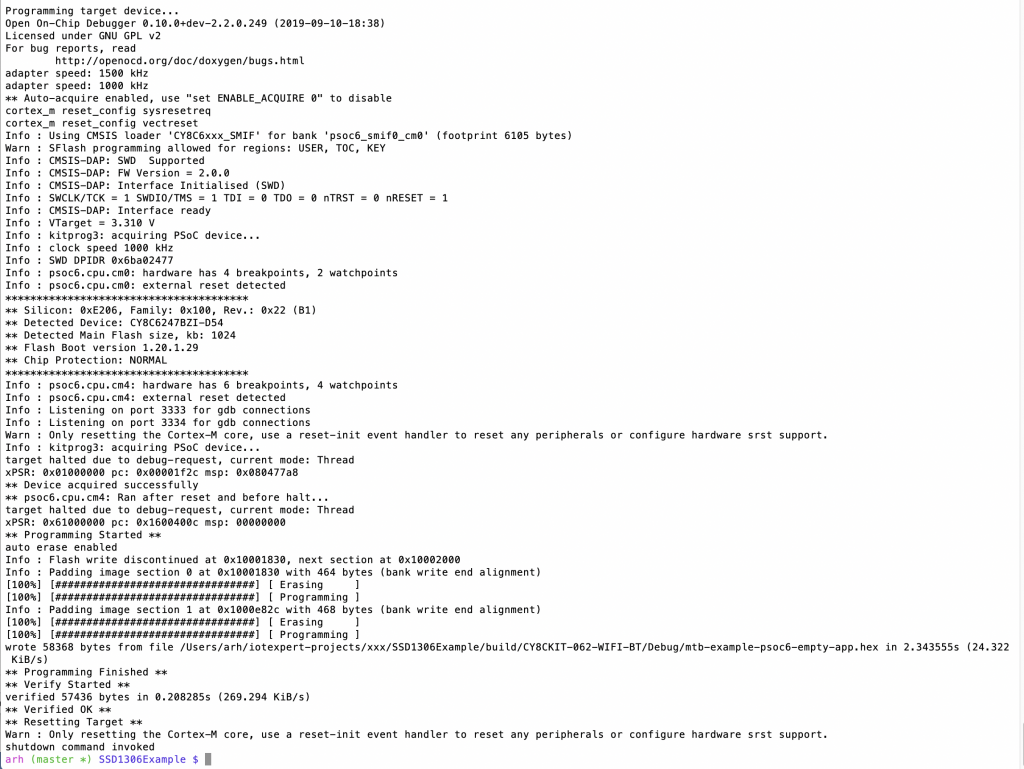 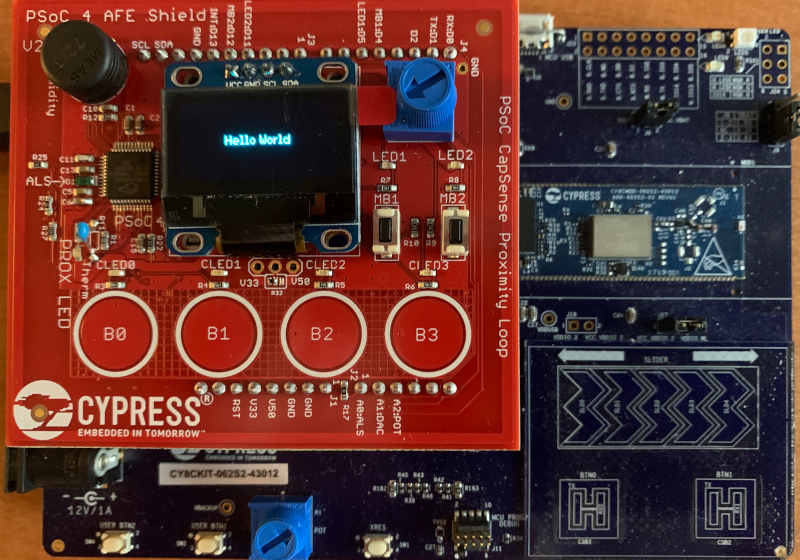 I showed you how to manually add a library to your project.  But what if you want to have the library you built show up in the Library manager?  In the picture below you can see that is exactly what I did by adding a new category called “iotexpert” 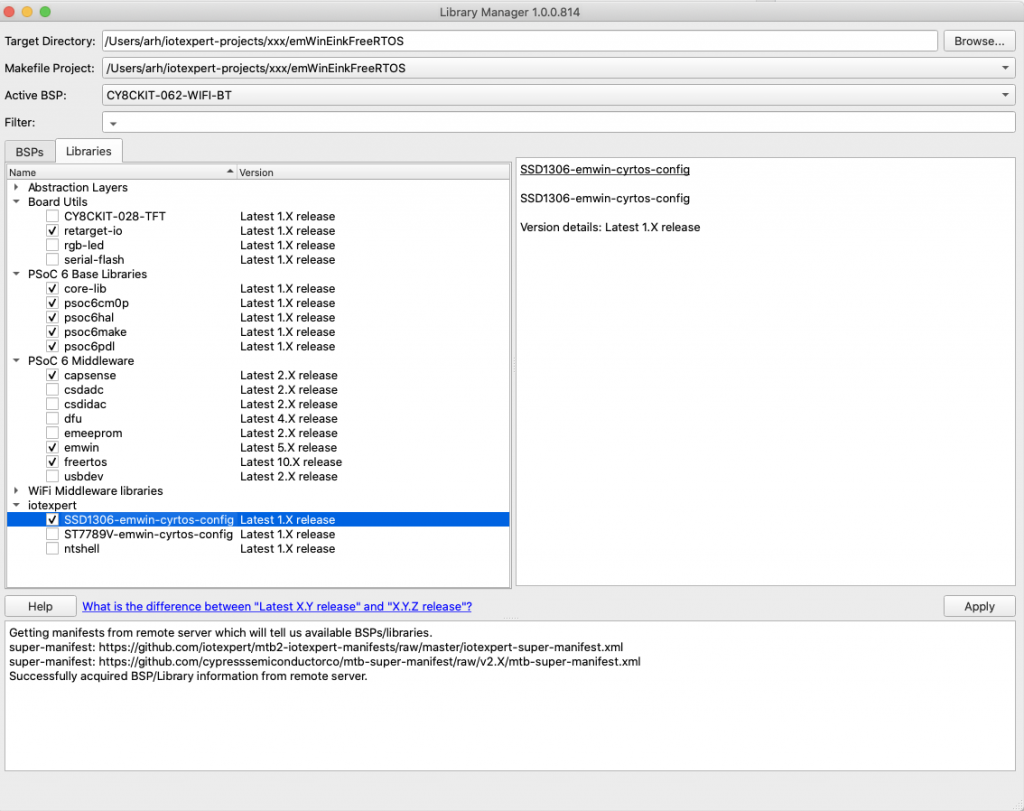 To make this work you need a “Super Manifest” which is just a XML file that contains URLs references to your custom Application Templates manifest file(s), Middleware manifests file(s), and BSP manifest file(s). A “manifest” file is just an XML file with a list of URLs to Git Repos and some meta data.

In words you need:

I start by creating the manifest.loc file to refer to a specific file on GitHub. “https://github.com/iotexpert/mtb2-iotexpert-manifests/raw/master/iotexpert-super-manifest.xml”.  Notice that it is stored in “.modustoolbo” which is a directory that starts with a “.” which is a PITA on Windows.  The only way I know how to edit/create this is by using the “modus shell” (which we provided as part of the Modus Toolbox installation.  Here is a screenshot from my Mac.  Notice that I use the GitHub URL mechanism to get to the “raw” file.

In my SuperManifest file I create references to the

Notice that both of these files are on the same GitHub repository.

The rest of the XML is meta data which specifies how the middleware is presented by the library manager.

You can see that my GitHub repository contains 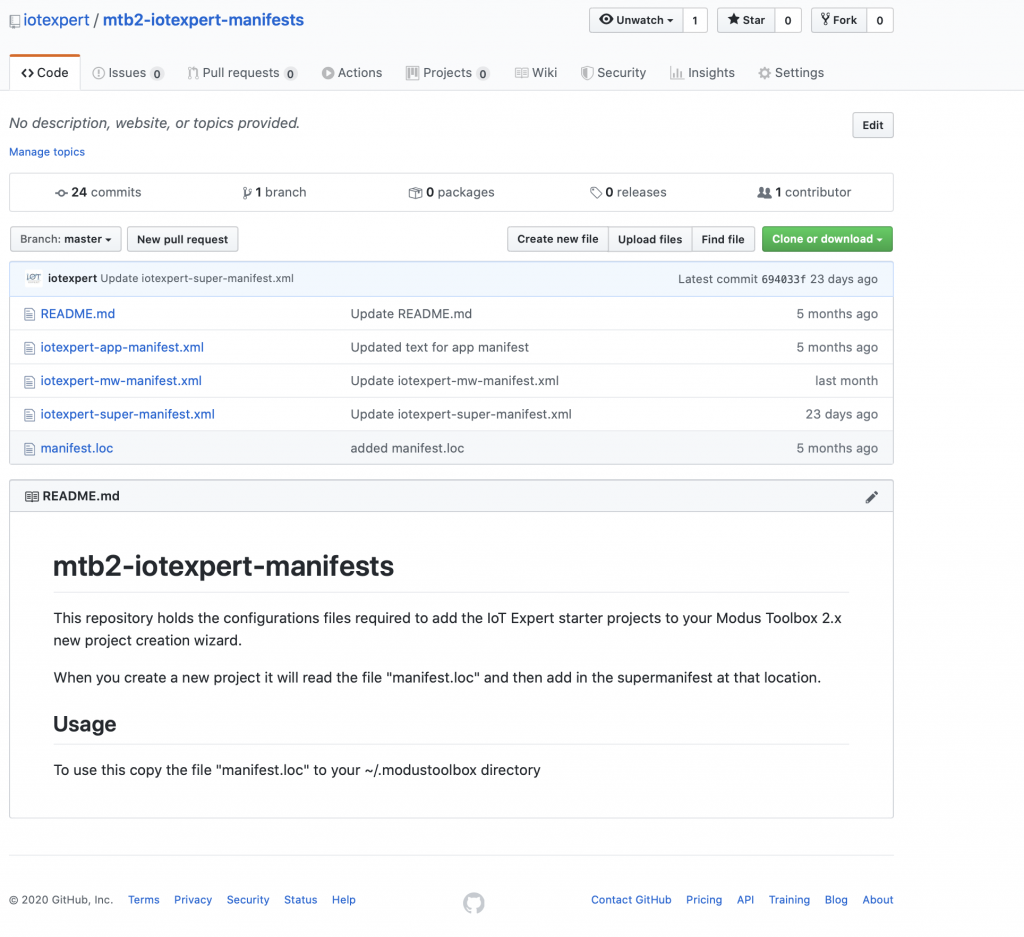 Now if you look at the bottom of the library manager you will see that when it starts up it read the Cypress Super Manifest file, as well as the IoT Expert Super Manifest.

To be clear.  If you add my “manifest.loc” file to your ~/.modustoolbox directory you will access to all of my libraries.