This article walks you through the steps to add DeepSleep Tickless mode to your PSoC 6 FreeRTOS project.  It includes an example project that demonstrates the use of the Cypress HAL and DeepSleep to acheive power savings.

This article is part of the "PSoC 6 Low Power Techniques" Series which covers a range of tools you have to lower the power of your system.  The following articles are (or will be) available:

The following resources are available

I recently taught the Modus Toolbox-101 class to a group of Cypress Field Applications Engineers.  In that class we have a chapter called “PSoC 6 Low Power” which shows you how to use the Low Power Assistant to improve your system power.  This chapter was built around the ARM MBED OS Software Development Kit inside of Modus Toolbox.  Every time I show people the low power assistant I am blown away by how easy it is to do.  Cypress is currently working on a major upgrade to our FreeRTOS implementation, but I thought that in advance of that I would take some of the steps myself.  Specifically, using FreeRTOS Tickless Mode.

What is Tickless mode?  In order to understand this you should understand that FreeRTOS runs a scheduler – and its not just FreeRTOS but every RTOS.  The scheduler is responsible for pausing, starting, stopping etc. the tasks based on your configuration (i.e. priorities).  The scheduler task needs to run on a regular basis, like every 1ms, or the system will fall apart.  This is done for you automatically by hooking up a system tick interrupt which interrupts whatever user task is happening and running the scheduler.

The next thing that you need to know is that RTOSs have a task called “idle” which runs when all of the real tasks are blocked either by a delay, semaphore, queue etc.  All this idle task does is burn CPU cycles until the next SysTick interrupt.  The idle task is implemented with something like while(1);  This isn’t really very constructive because the CPU is active, the clocks are active, etc. and this whole thing typically burns mA’s of current (at least on a PSoC 6).

But if the CPU is asleep how do you wakeup and when?  There are two answers to those questions:

But how do you set a wakeup time?  Simple.  Use the PSoC 6 MCWDT as a DeepSleep Low Power Timer.

In this article I will show you how to setup the FreeRTOS configuration files plus the HAL lptimer to achieve goal.  The sections are:

If you look at the PSoC 6 device configurator you will find a section called “RTOS”.  This was put by the Low Power Assistant team to enable stuff for MBEDOS.  However, it can/could/will be used for FreeRTOS as well.   All this configuration does is create a section of #defines which can then be used to setup your low power code.

The first parameter is “System Idle Power Mode” which can be set as “Active, CPU Sleep or System Deep Sleep”.

The second parameter is “Deep Sleep Latency” which is an integer which can set the minimum sleep time.  In other words if you are going to sleep less than this number, don’t bother. 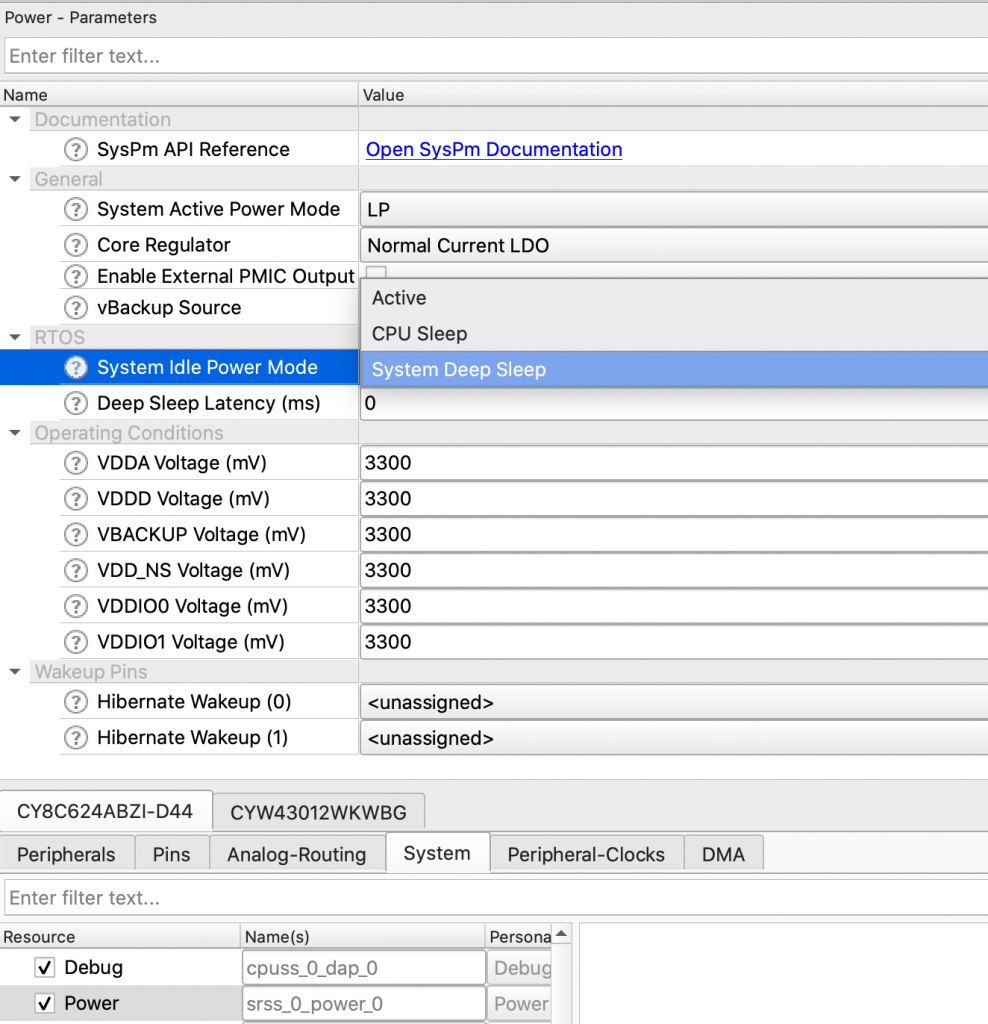 When you configure these parameters, it will create the following #defines in the cycfg_system.h

The first three are used because the c-preprocessor can only evaluate integer expressions.  These defines enable you to do compares with the power mode in your code.  The “CY_CFG_PWR_SYS_IDLE_MODE” it set to whatever you specified in the configurator.  Here is a clip from the cycfg_system.h

So now what?  Lets use those defines to get FreeRTOS going.  The first thing you need to do is tell FreeRTOS that you want to use TICKLESS IDLE by setting the #define configUSE_TICKLESS_IDLE.  There are three possible settings:

I add this block of code to my FreeRTOSConfig.h.  It says:

63: If the user has selected Sleep or DeepSleep

64: Give me access to the vApplicationSleep function (which I will write)

65: Tell FreeRTOS to call the vApplicationSleep function in the idle task

66: And tell FreeRTOS that I want to use MY OWN implementation of Tickless

69-71: If the user has specified a minimum time, then tell FreeRTOS to use that minimum.

Now I need to implement the function “vApplicationSleep” which will look at the state of affairs and “do the needful”.  I decided to put all of the low power stuff a file called “lowPower.c”.   It goes like this:

27-28: Disable the SysTick and disable the ARM global interrupts

31: Ask the RTOS if we REALLY want to go to sleep, which could have changed if there was an interrupt or a task became active before the interrupts were disabled

34: If we are really going to go to sleep (in other words we shouldn’t abort)

Remember from above there are two Sleep/DeepSleep cases:

36-40: If there is a task waiting then setup the timer to wakeup in that amount of time

42: Remember when you went to sleep, so you can fix the system timer after you wake backup

43-46: Sleep or DeepSleep (depending on what the user said in the configurator)

48: Or bail if the developer didn’t turn on this code

51: When you wake up find out what time it is

54: Fix the tick count in the RTOS based on how long you slept

61-62: Enable the interrupts and turn the SysTick back on.

The last thing to wrap this up is to build an example demo program.  This one will do two things

This will demonstrate that you can do both DeepSleep modes.

Start this example with a main that sets up the Switch, then starts the blinking task

The event handler sets a semaphore when the button is pressed.

The blinking LED task, initializes the LED and the sempahore.

Then blinks until the count is 0, waits for the semaphore, then resets the count back to 6 (aka 3 blinks)