In the WICED WiFI SDK there is an example program called “test.console” which allows you to use a UART command line to do networking “stuff”.  With the release of the new AnyCloud SDK I decided that I should rebuild some of that program using the PSoC and WiFi.  Basically a set of commands like “scan” to interact with the Radio World!  In the picture you below you can see that I use the command “scan” to list out the networks at my house. 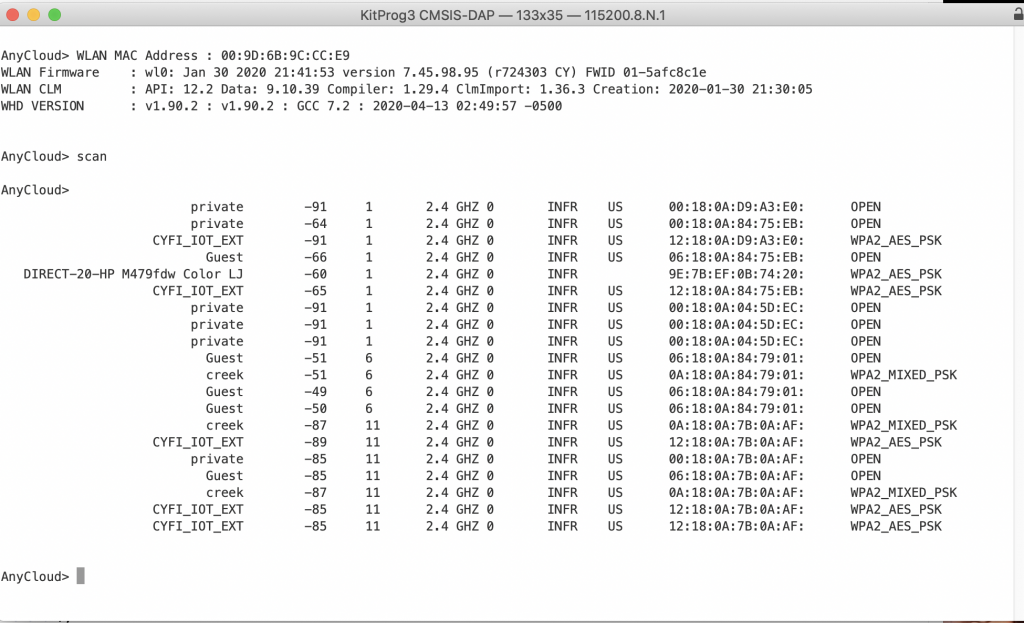 My implementation will have three tasks 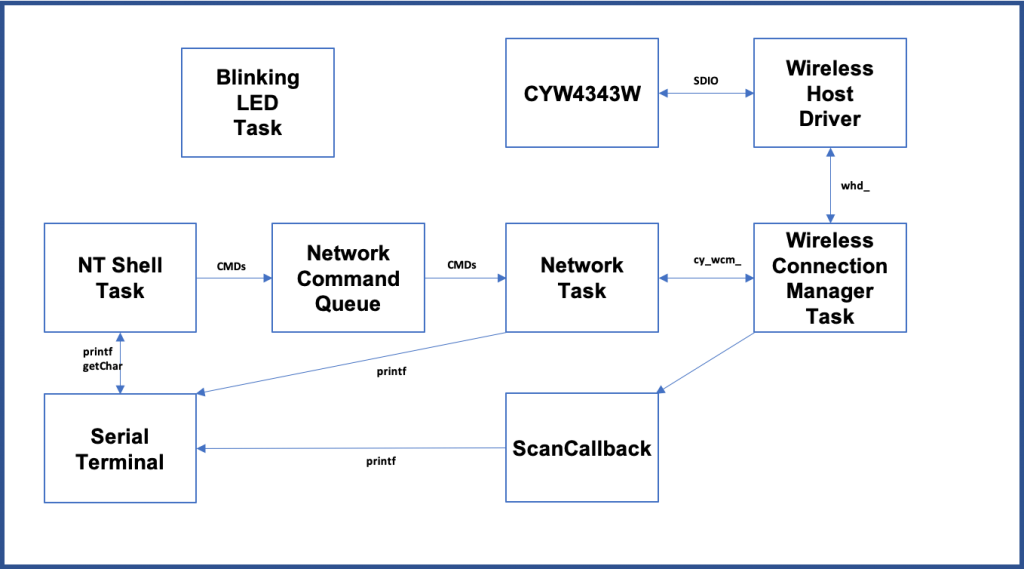 To build this project start by creating a new project.  The development board that I had plugged into my computer when I began this project is a CY8CPROTO-062-4343W so this is the one I will select. 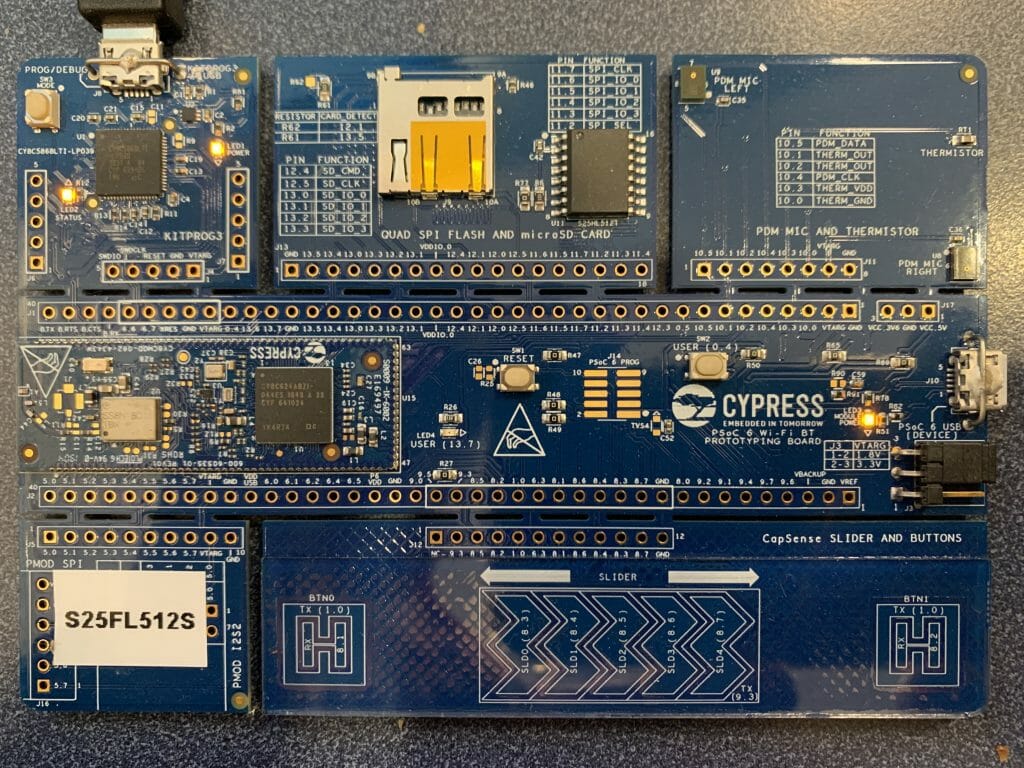 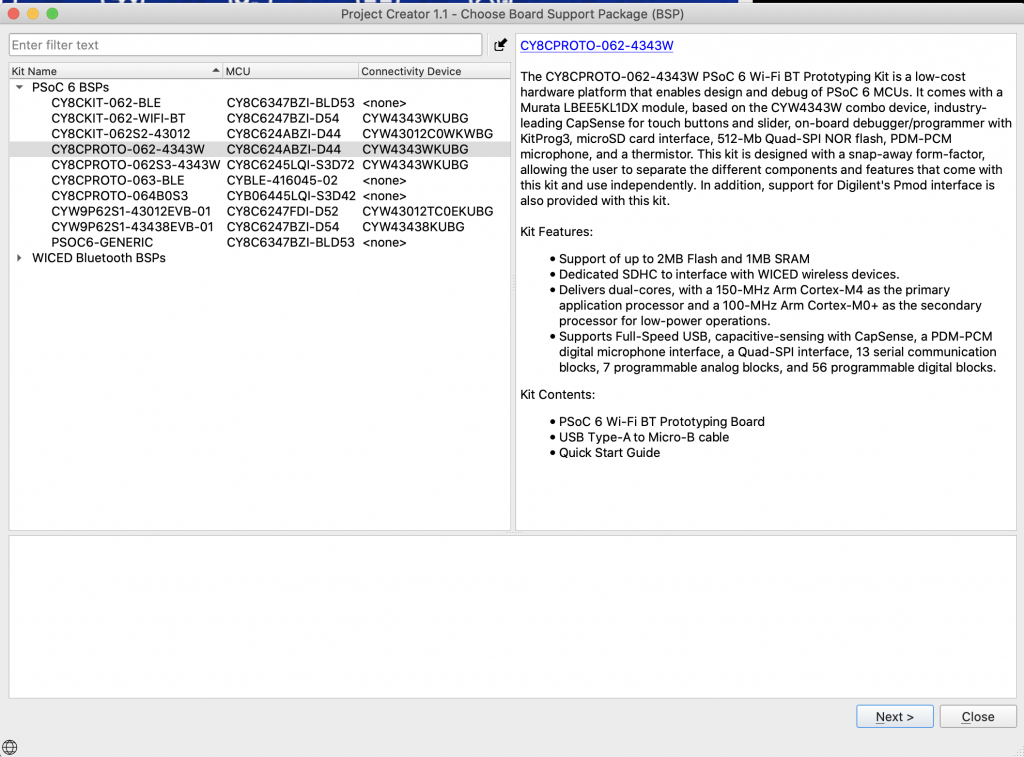 I created a FreeRTOS template project that does all of the right stuff.  I wrote an article about how to use the IoT Expert Manifestt here, and until you add the IoT Manifest to your setup you will not get the FreeRTOS Template project. 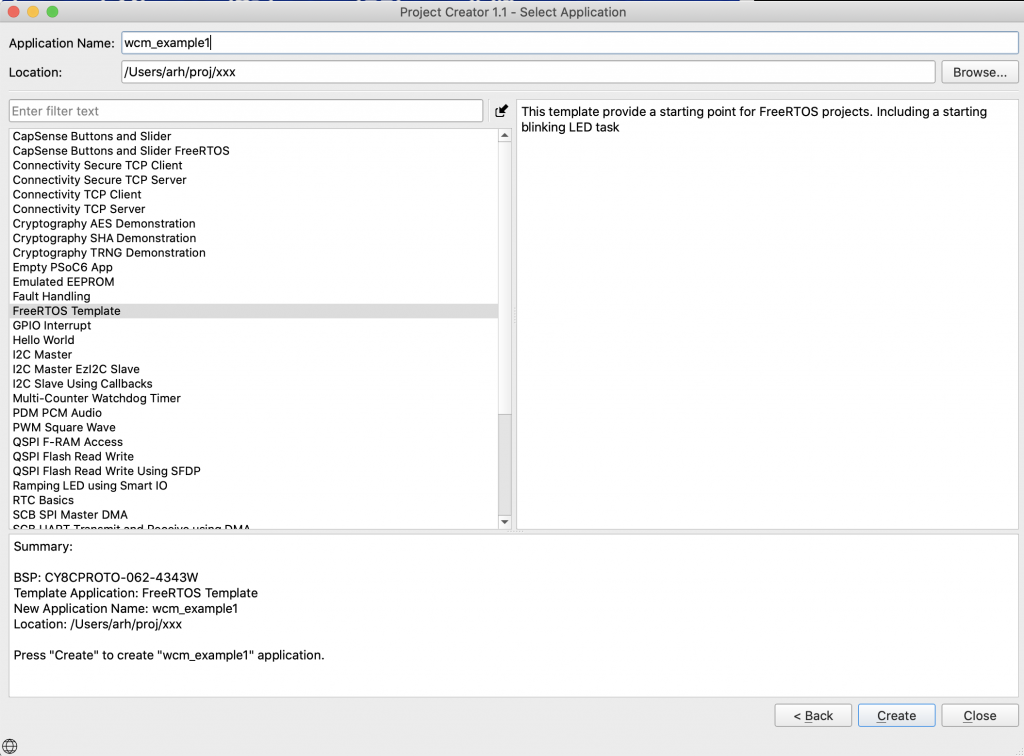 After the new project work is done you should see 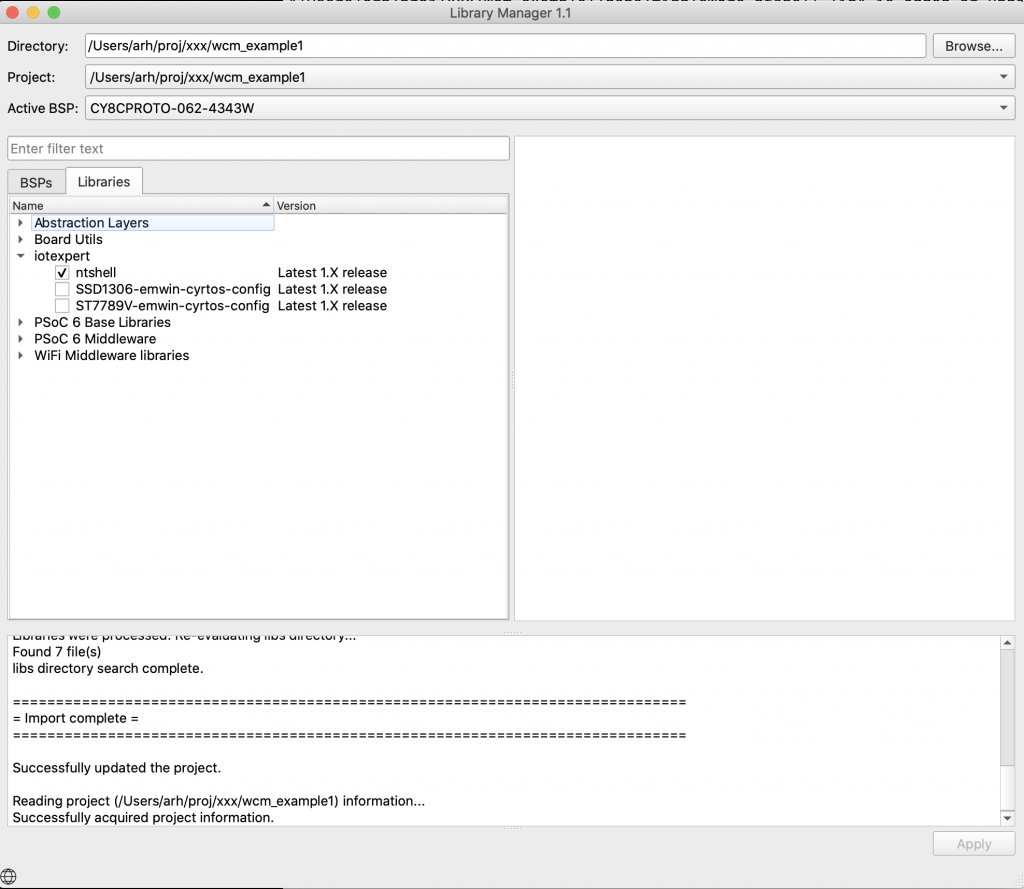 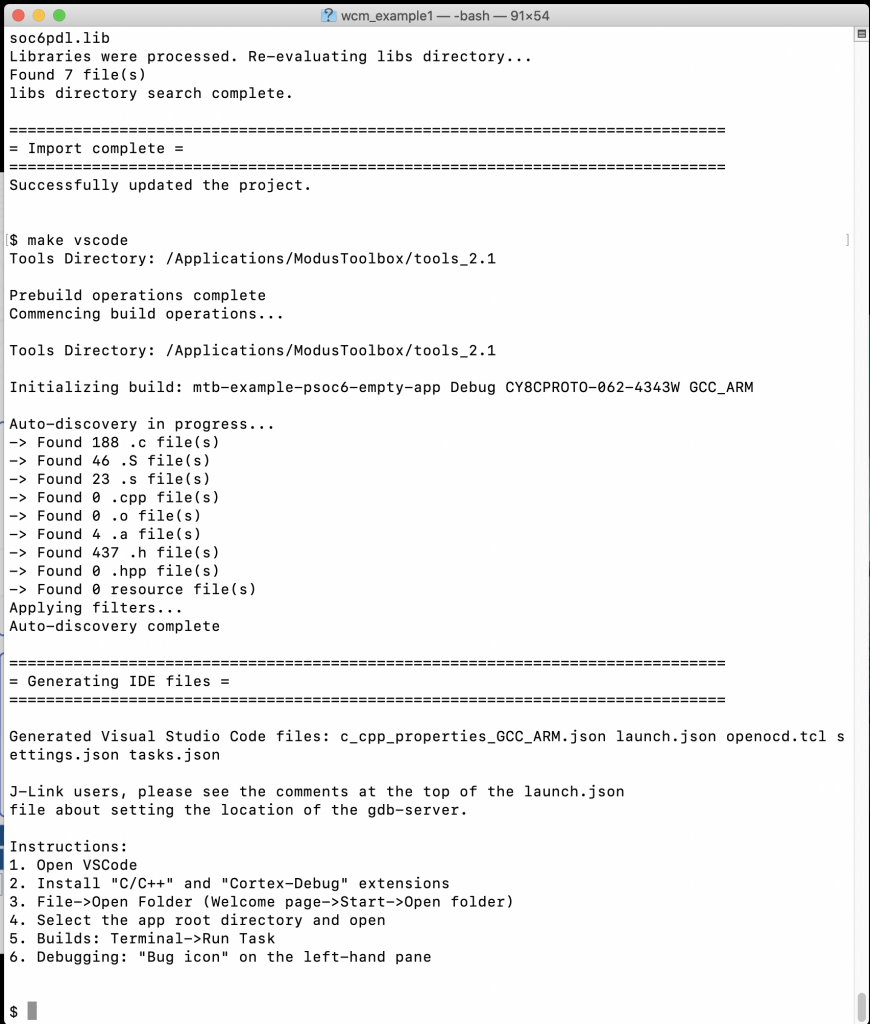 In the finder, copy the template files from nt-shell into your project. 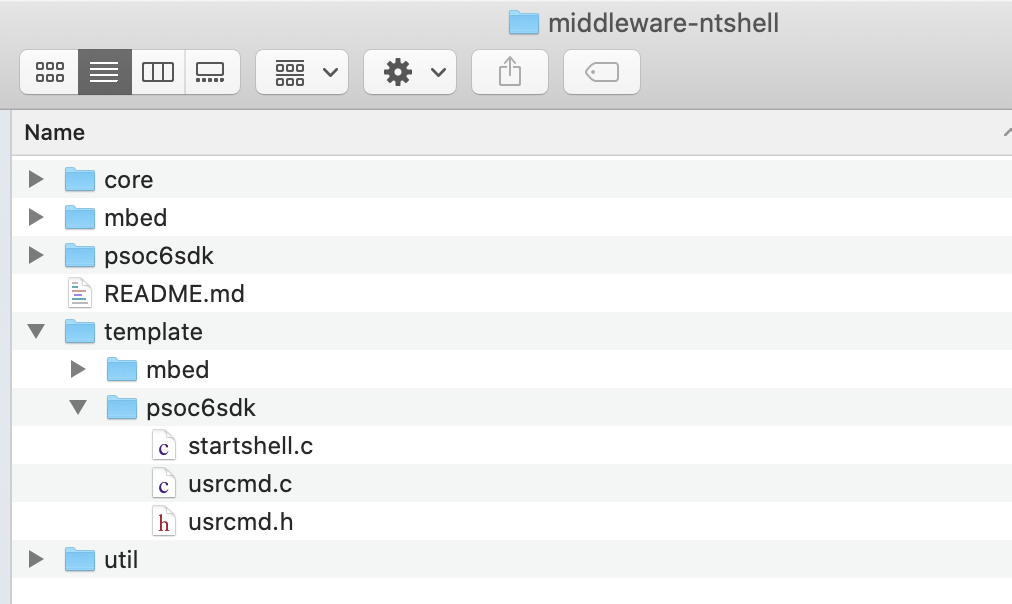 You can also do it with the command line.

Edit main.c to include the configuration.

Update the main.c to have the ntShellThread

And start the ntshell task.

Here is an example of of the printargs command.  The shell will call your function with a ARGC=number of arguments and ARGV[] an array of the pointers to the actual arguments.

Build and test your program.

Turn on the Connection Manager and Core Middleware Library

Now, add the wifi-mw-core library & Connection Manager using the library manager.  You can start it with “make modlibs”.  These two libraries are in the “WiFi Middleware” category. 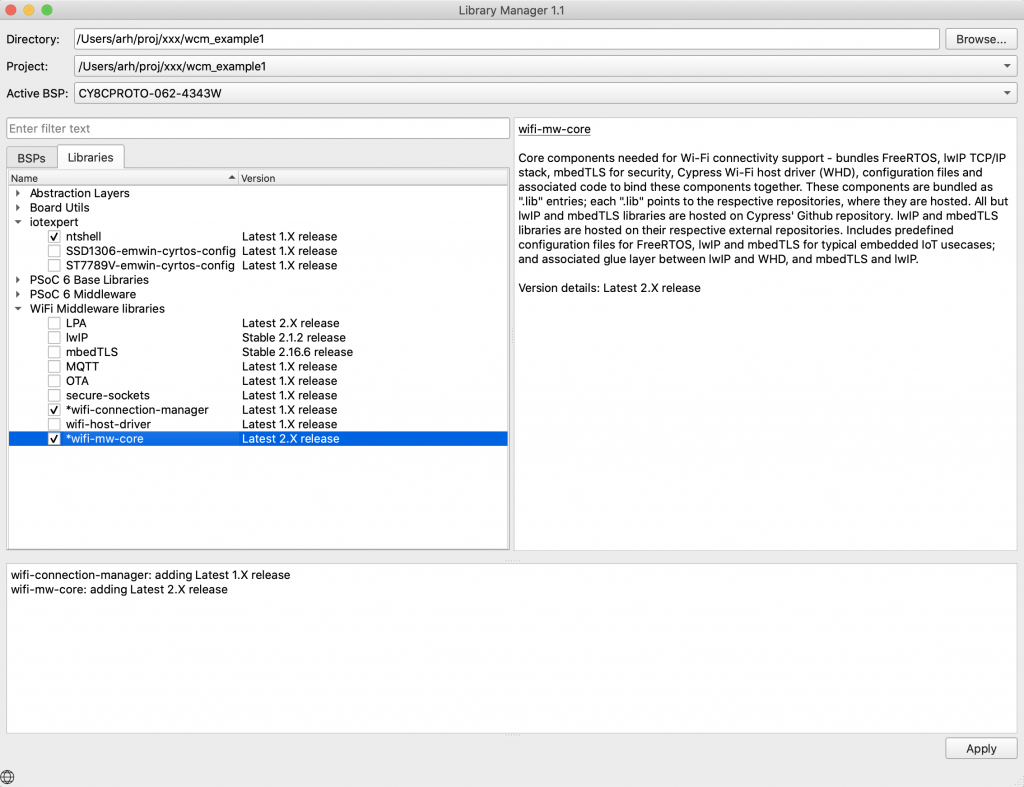 Copy the FreeRTOSConfig.h from the libs/wifi-mw-core/configs directory into your project (so you can modify it) 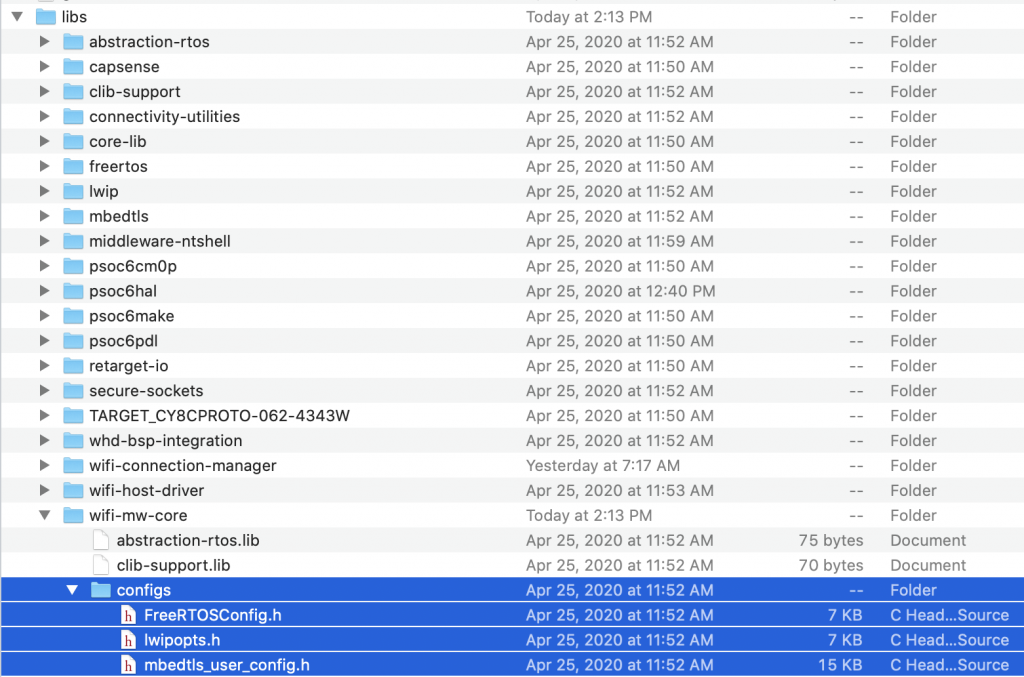 Ill go ahead and modify main.c to start the yet to be written network task.  You need to include the header file for the task and define a handle for the task.

Create the file networkTask.c.  Make a bunch of includes.

Now let’s define the actual task function.  This function will

Create Utilities for Printing out the IP and MAC Address

The IP v ersion is just an enumeration.

To print an address, figure out which version you are working on.  Then dump the raw bytes.  Notice in the IPV4 case it is encoded into a uint32_t as 4 continuous bytes.

So, the print is just a loop. (probably should have done something slightly better so I dont end up with the trailing : – oh well)

For the scan I want to print out the:

In order to have the WCM run a scan you need to call the function cy_wcm_start_scan.  What this will do is tell the 4343W to scan all the channels on the 2.4GHZ band and listen for access point beacons.  This function has three arguments

Here is my version of the scanCallback which I put in the networkTask.c file.

The result_ptr is a pointer to a structure that contains the data for the found access point.

The other parameter to the callback is the status.  The status will either be CY_WCM_SCAN_COMPLETE or CY_WCM_SCAN_INCOMPLETE.  The first thing that to do is see if this callback is the one that tells me that the scan is complete, if so I just return (and don’t print anything)

Then I print out the raw SSID, Signal Strength and Channel.

Next I figure out what channel we are talking about.  The 4343W is single band 2.4GHZ, however, other Cypress chips have dual band.

Then I printout the maximum data rate, which is 0 for all of my test cases.  I have no idea why.

Then I printout what type of AP we are talking about.

Then the country code.

Then the Basic Service Set ID of the AP, which is also known as the MAC address of the AP.

Then the security type.

With a complete scanCallback function I can now update the networkTask to deal with the queued commands of net_scan type.  This simply either stops or starts the scan based on the message parameter.

The last things to do is to add the scan command to the usrcmd.c

OK.  Let it rip.  You should be able to run network scans.  In the next Article I will add a connect and disconnect commands.

You can find all of this example code at https://github.com/iotexpert/wcm_example