Yesterday, the Cypress software team released an update to Modus Toolbox, specifically to the “tools package”.  I am super excited about a bunch of the new features and I thought that I would should show you a few of the updates.  Specifically:

You can still create your projects from inside of Eclipse from the Quick Panel. 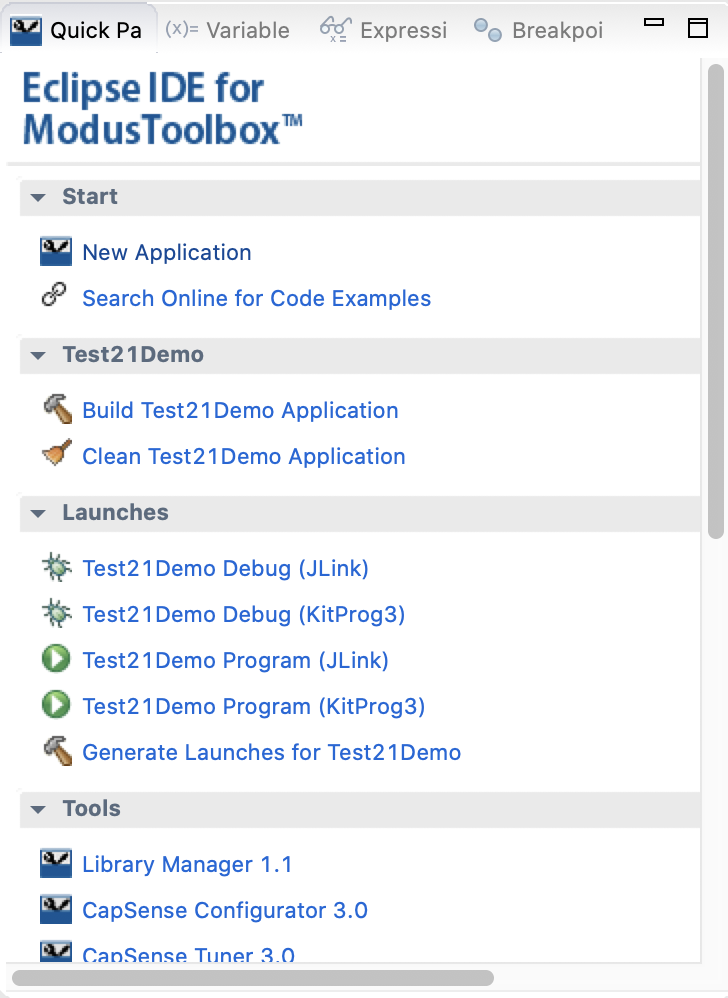 The update in Modus Toolbox 2.1 is that the new project will launch an external project creation tool. 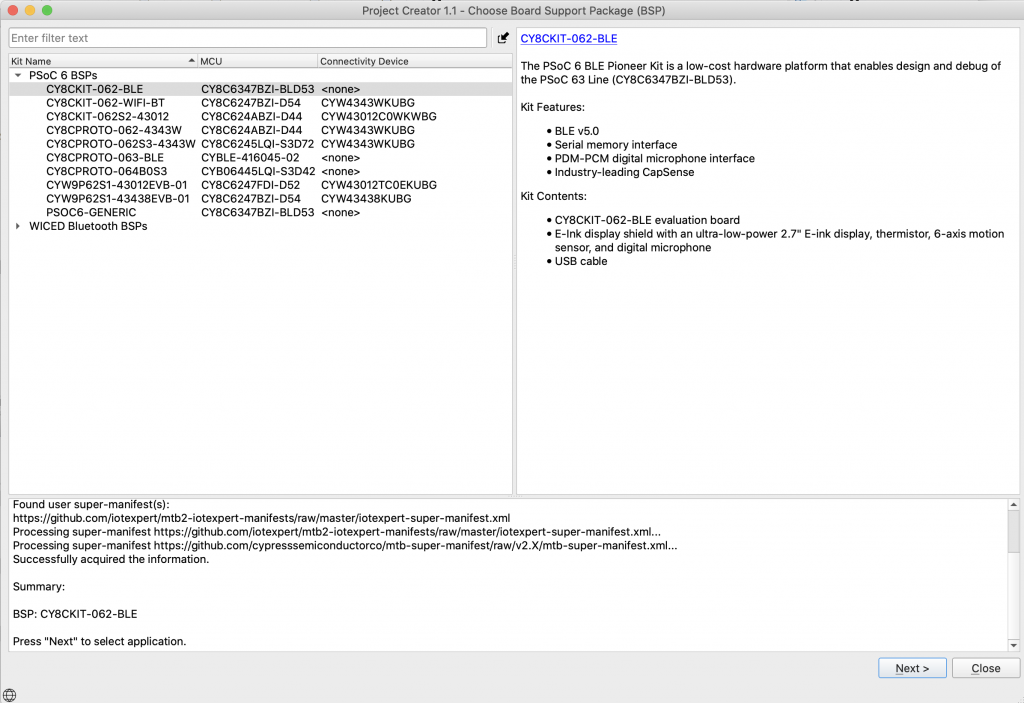 However, if you want, you can totally ditch Eclipse and start the new project wizard from outside (via the Start menu or the Launchpad).  The new project creation wizard is a stand alone program that is written in C++ program and Qt that works on Mac, Windows, and Linux.  When you run the new project creation tool you will see this (at least on a Mac).  Look, it is exactly the same as the one you get from inside Eclipse (no surprise since it is exactly the same thing) 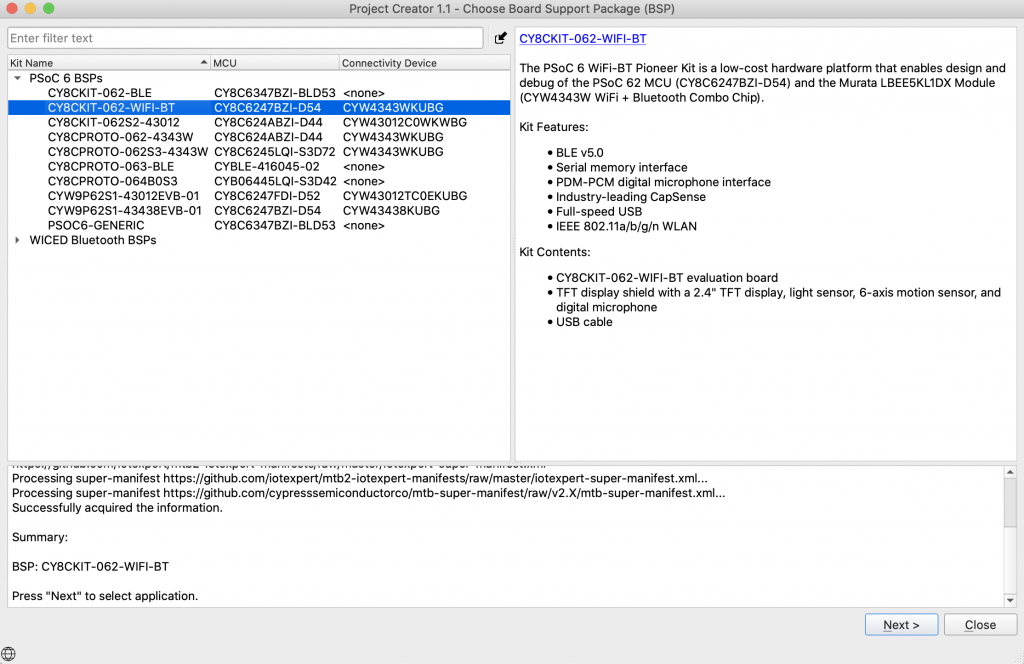 Notice that there is NO requirement that you run this tool from Eclipse.  On Windows you can find it from the Start menu and on Mac you can find it on the Launchpad (as project-creator). 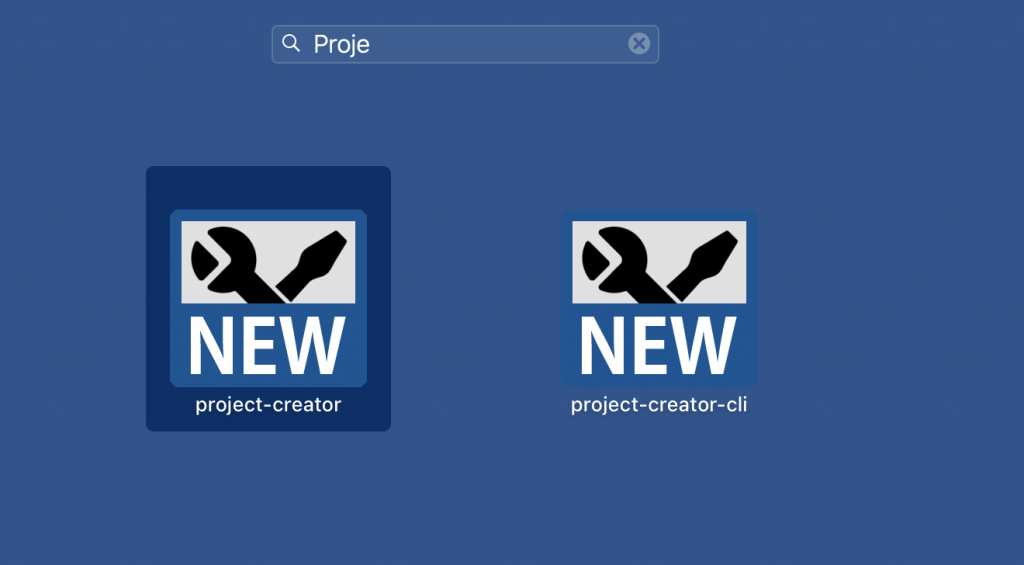 First pick out a “Kit name” which will select the board support package for your project.  Ill Pick “CY8CKIT-062-WIFI-BT” (because that is what happens to be on my desk and press Next.

When the Project Creator starts it will go to the Cypress GitHub site and load in a file that will tell it all of the example projects and BSPs available.  This means that Cypress can release new BSPs and Example templates without you having to update your version of Modus Toolbox.

I give my example a name of “ExampleMTB21” then pick out the “Empty PSoC6 App” and press Create. 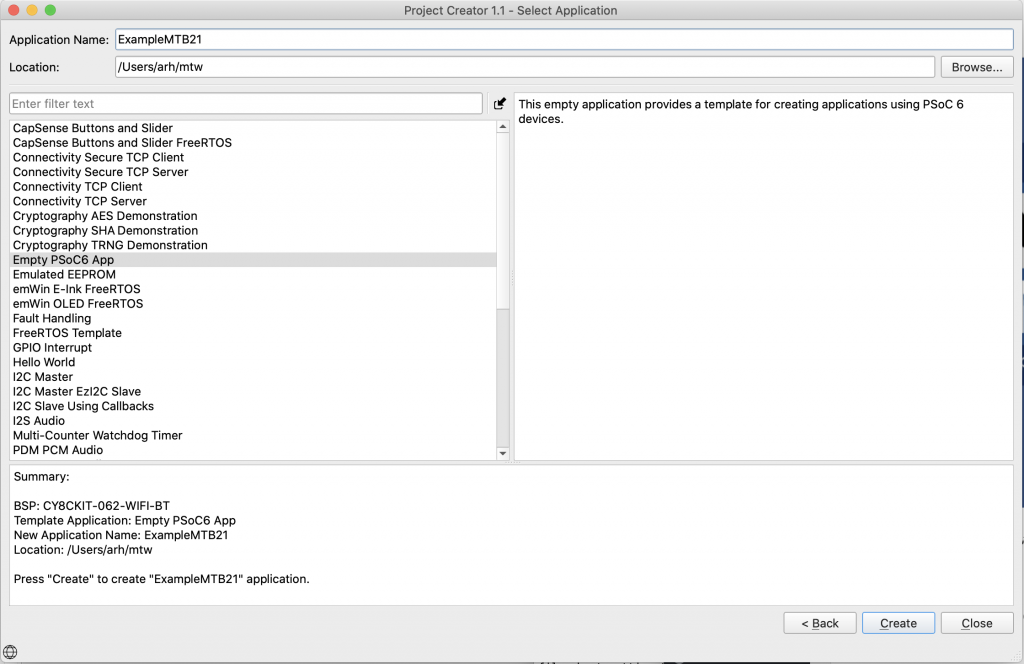 To create a project we basically “git clone” a bunch of different repositories.  So, in the output window, you will mostly see the output of Git doing its thing. 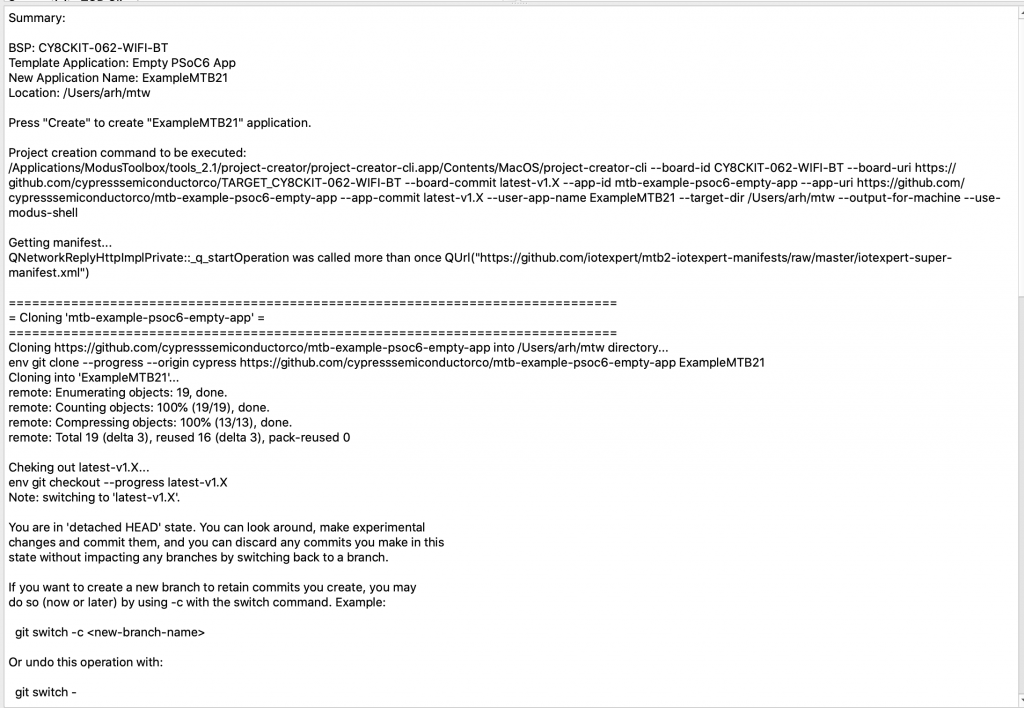 When it is all done you can press “Close”.  Now you can look in the file browser and you will see a complete project. 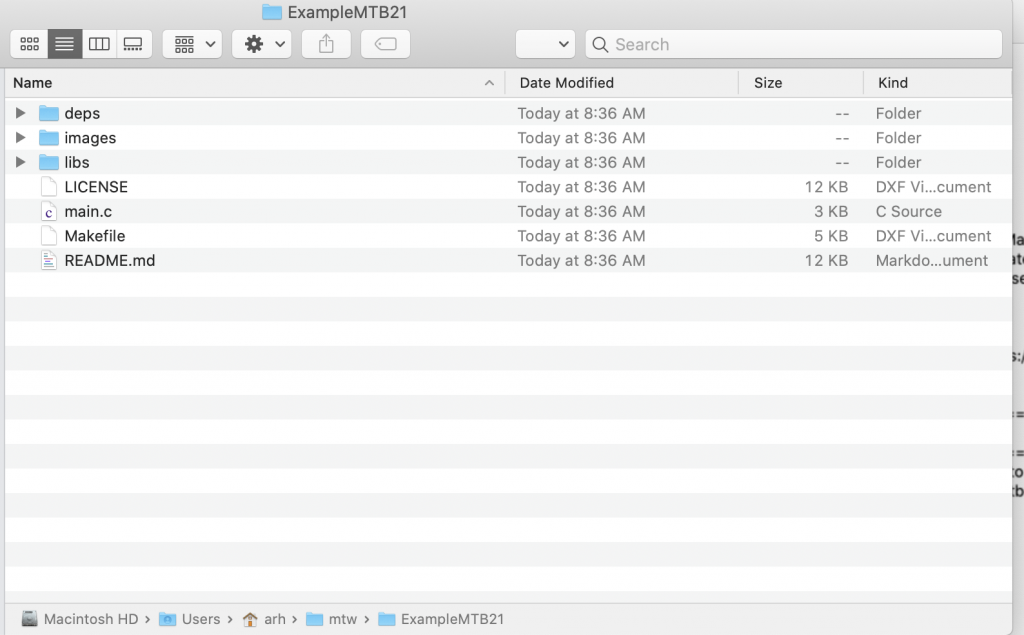 When you look at the files inside of a file browser you should notice two things.   First there is a directory called “deps” which has two files called “dot Libs”.  These two files contain URLs to the GitHub repositories for two of the BSPs.  In Modus Toolbox 2.0 we stored the dotLib files in the same directory with the actual libraries.  When you look in the Libs directory you will see the actual libraries which are required to build your project.  The Libs directory is now “Generated Source” which means you can blow it away and it can be re-generated with “make getlibs” (which will read the dotLibs from the Deps directory” 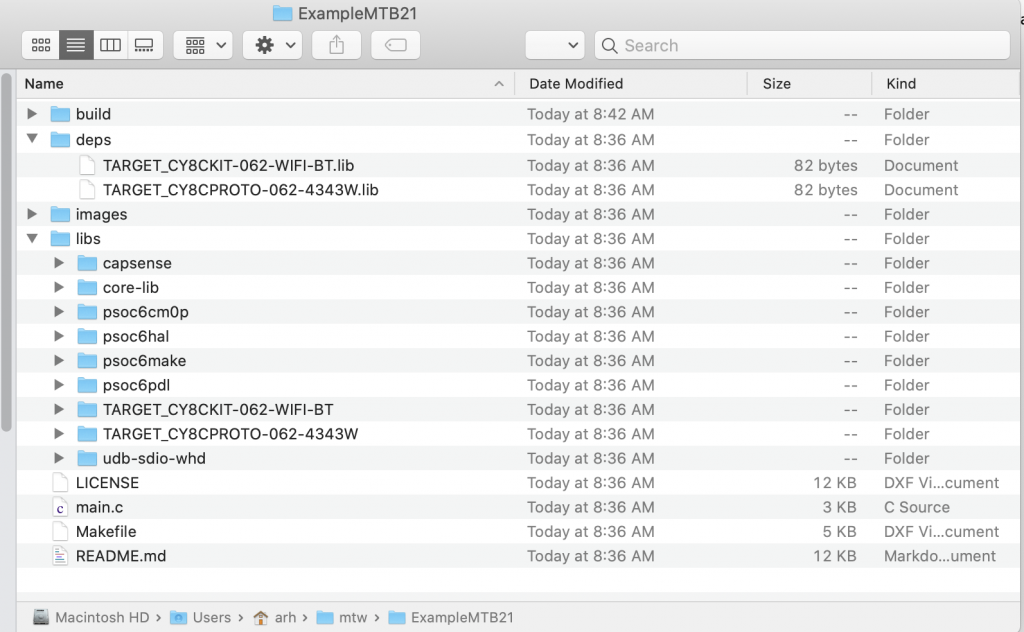 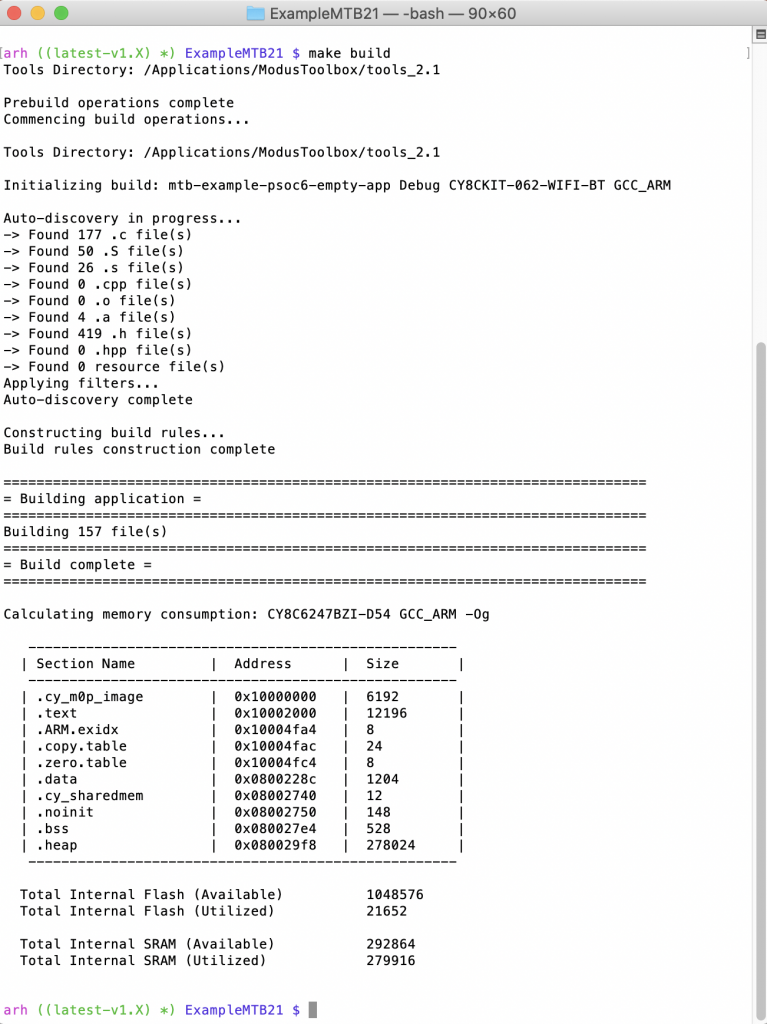 And then you can program your board with “make program” 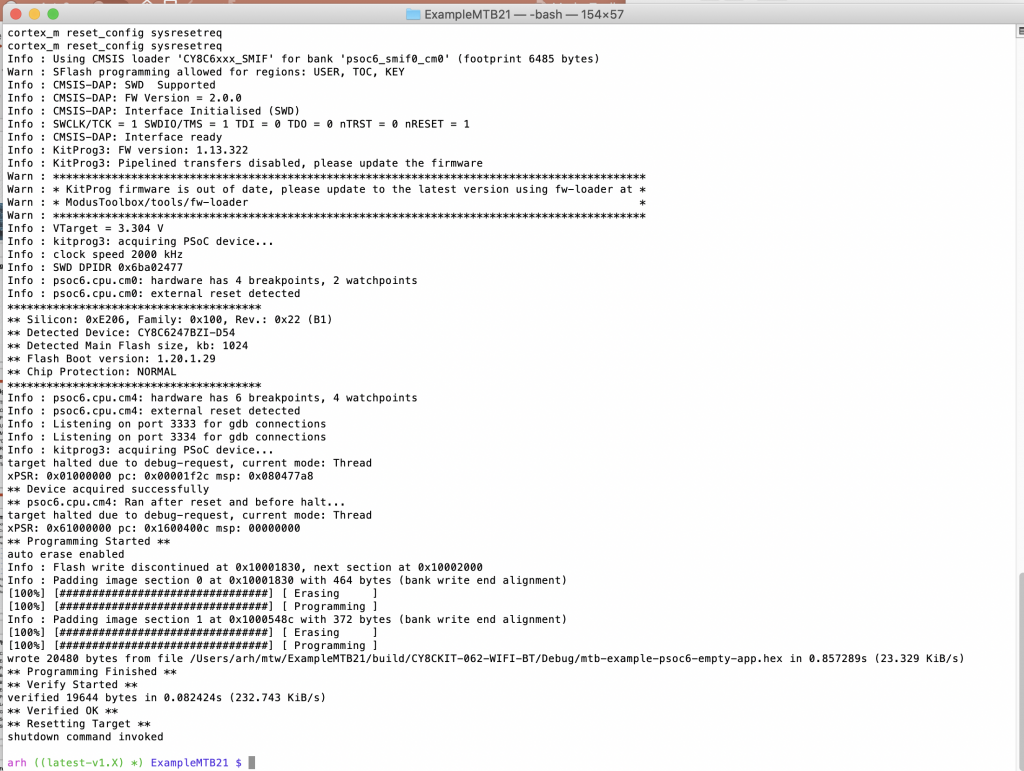 The command line stuff is cool, but I know that there are tons of people out there who like Visual Studio Code which we we now officially support.  To use it you can run “make vscode” and it will create the files required to use your project in Visual Studio Code. 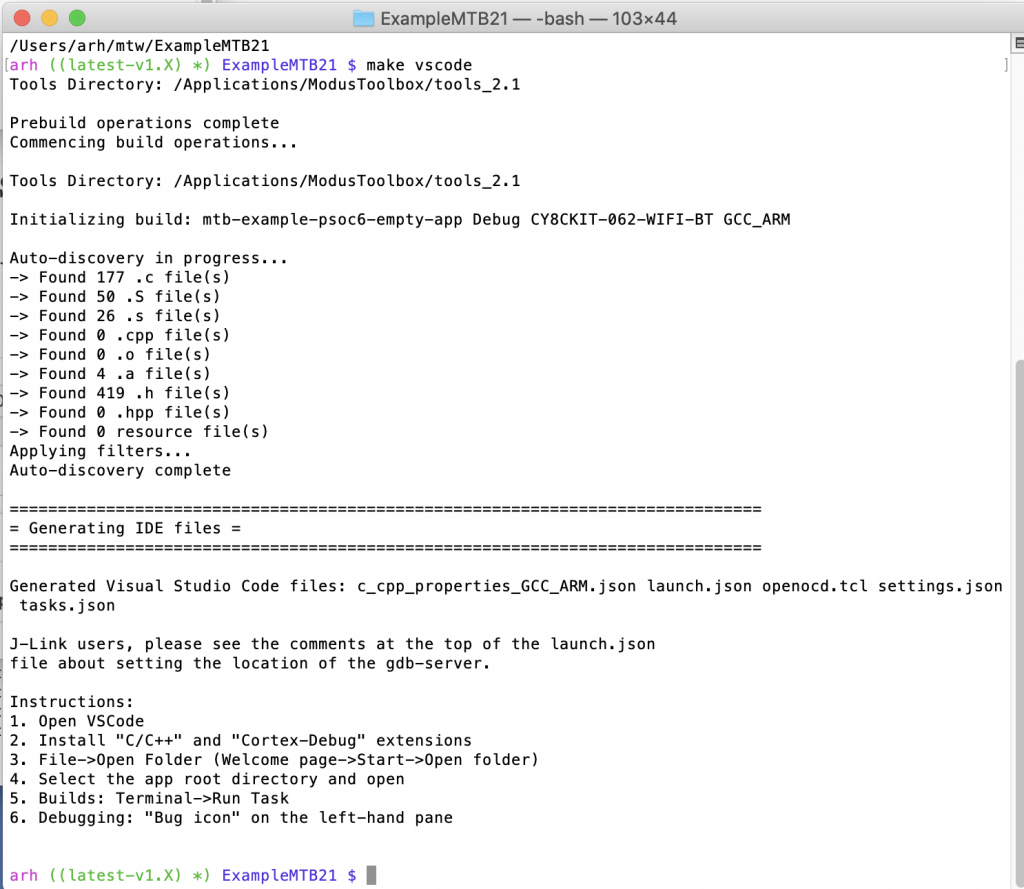 When I look at the project I see that Modus Toolbox create a directory called “.vscode” which has all of the secret sauce to make Visual Studio Code work. 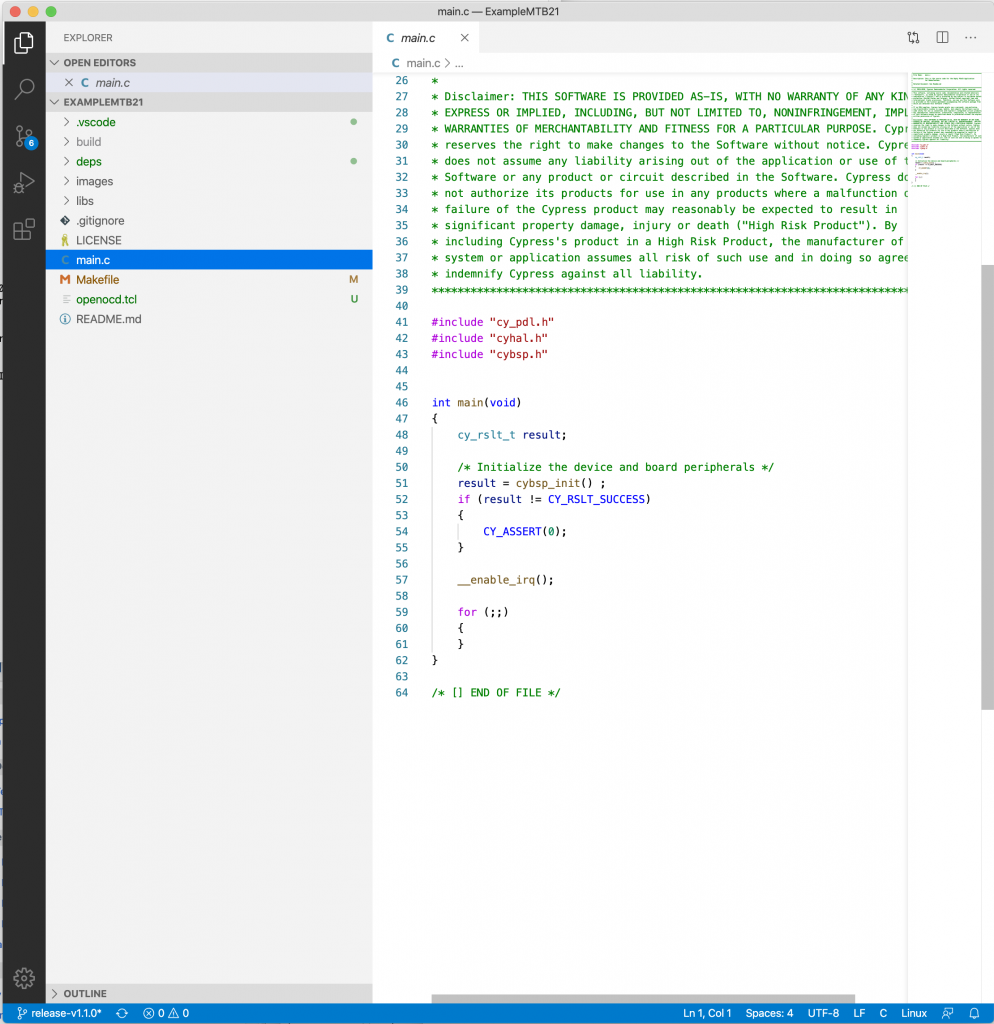 You can press cmd-shift-b to build the project

Which will send all of the output to the Visual Studio Code console. 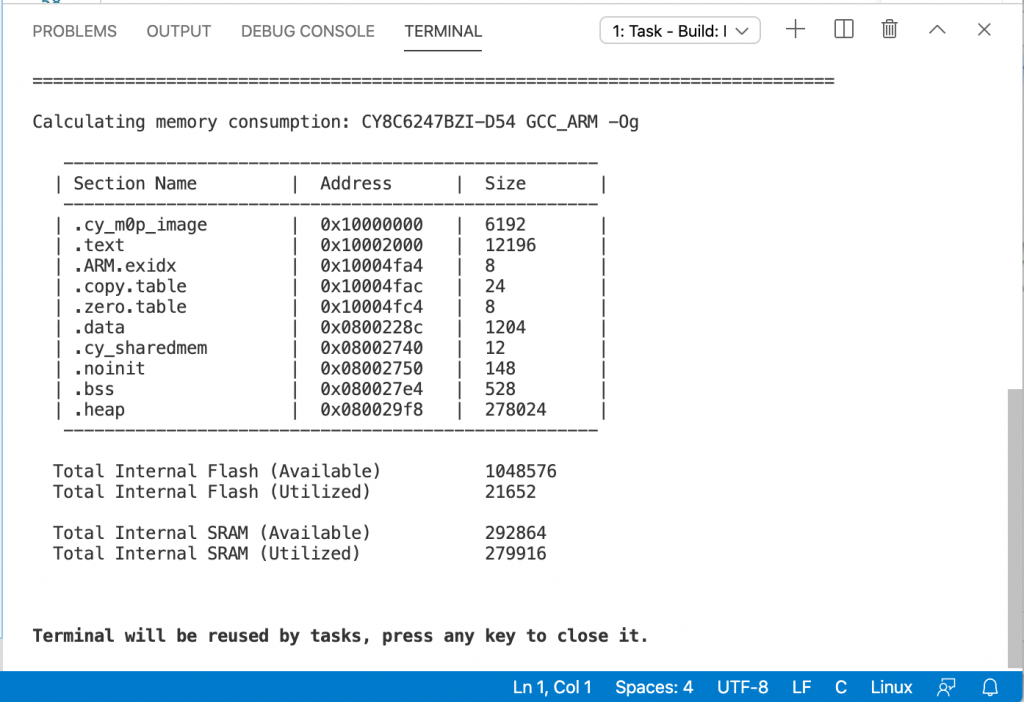 And you can then press F5 to start the programmer/debugger 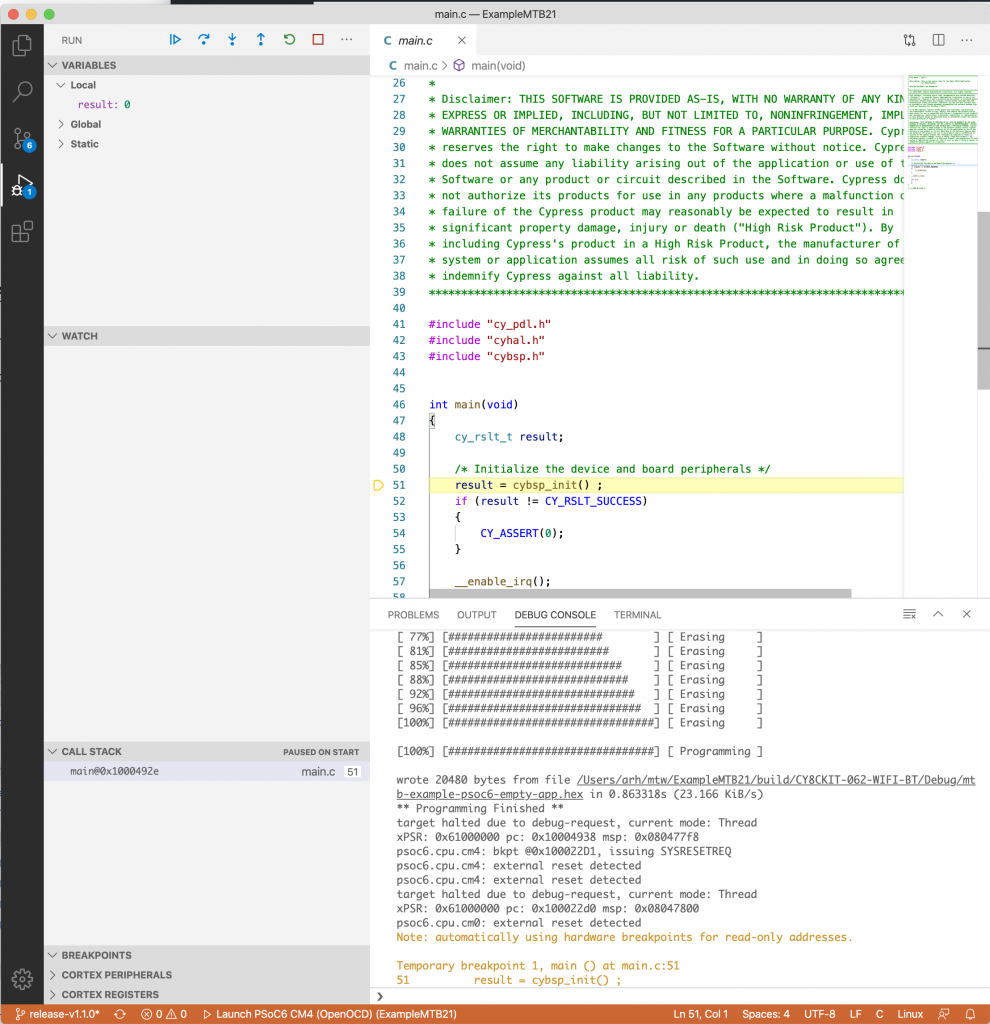 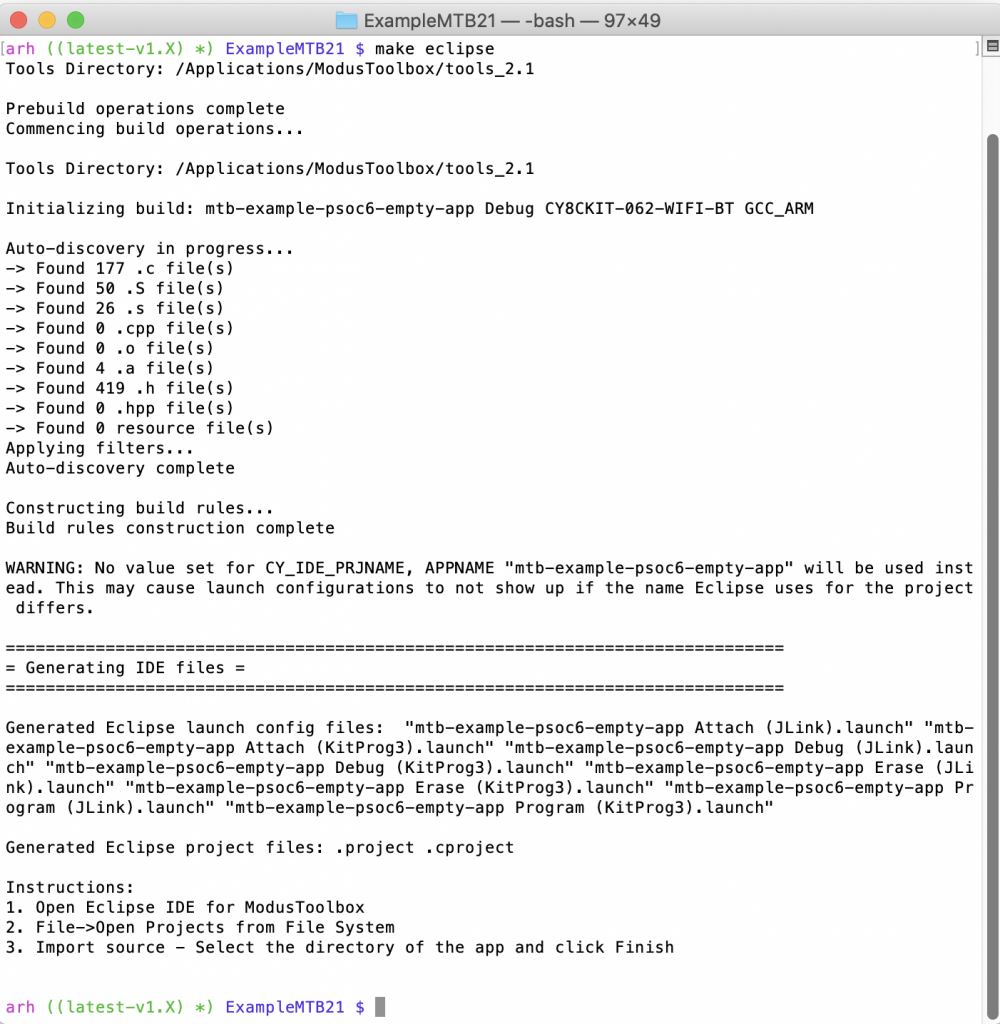 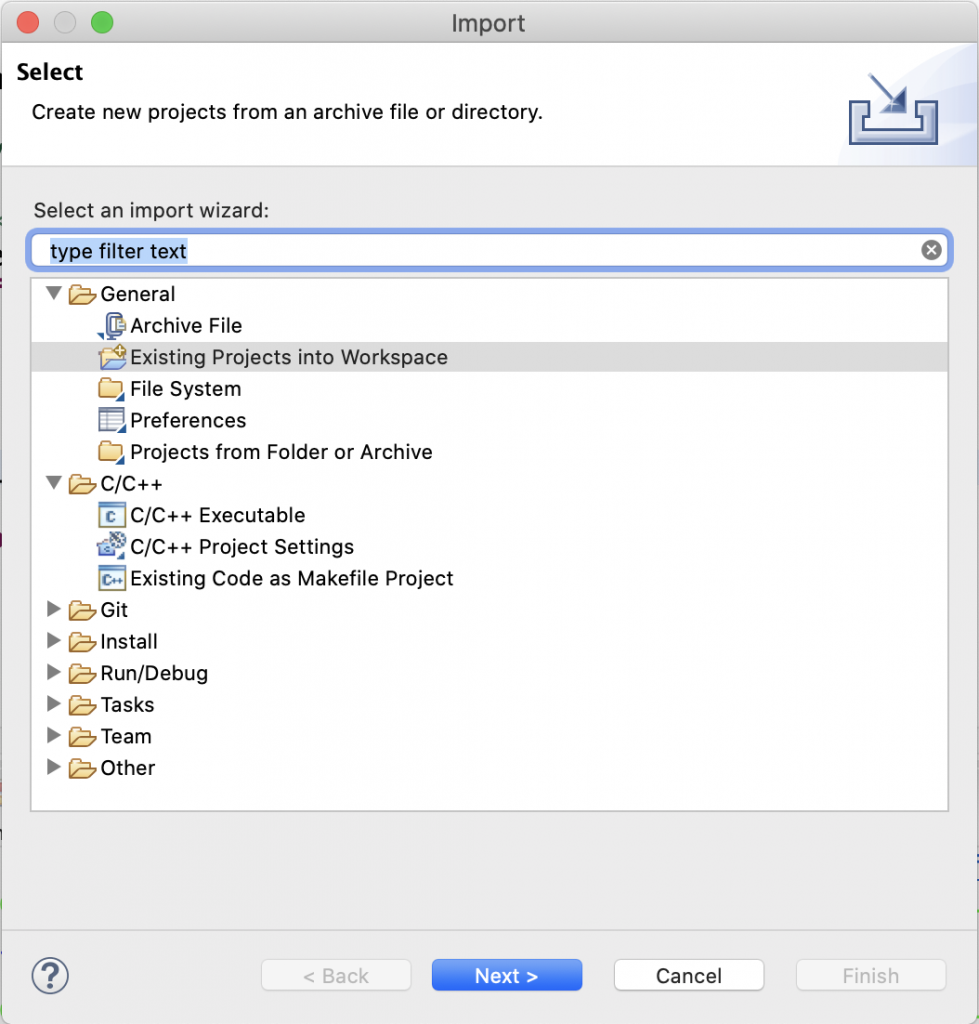 Then pick out your directory. 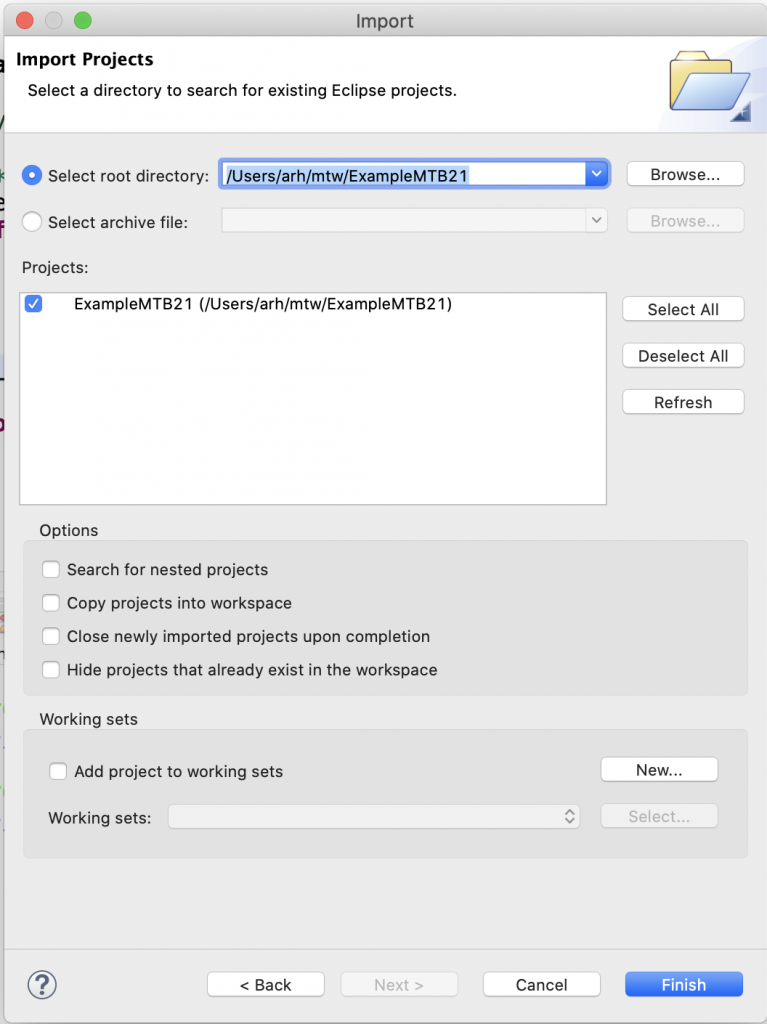 Press “Generate Launches for …” on the Quick Panel.  Then Press Build.

And now you have a fully functioning Modus Toolbox Project inside of your Eclipse workspace. 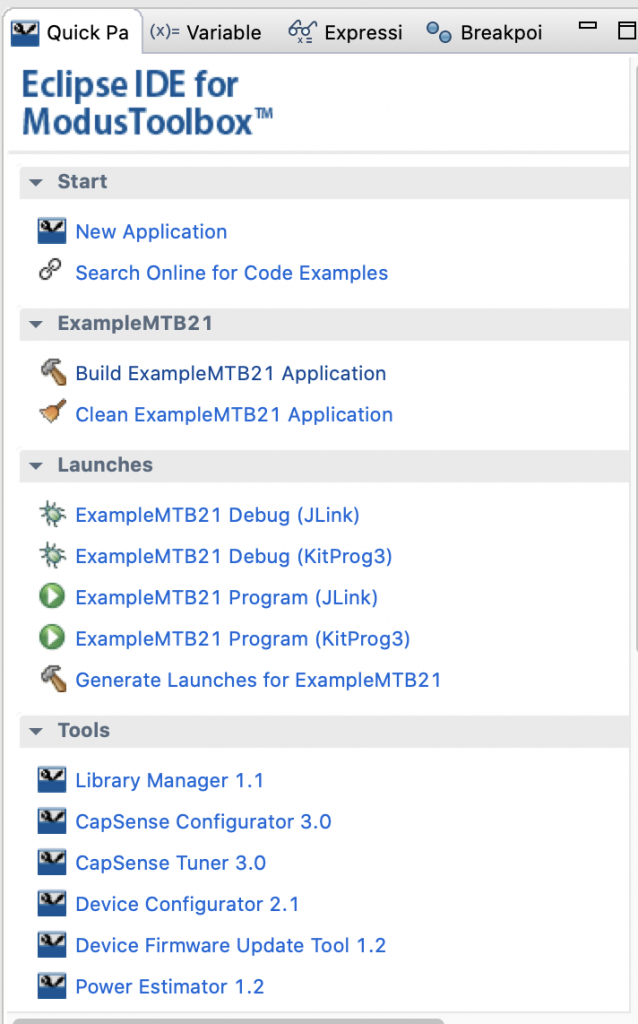 Another one of my favorite things was a massive update to the documentation inside of the Hardware Abstraction Layer.  At this point most of the HAL drivers should have Code snippets to give you an example of what to do. 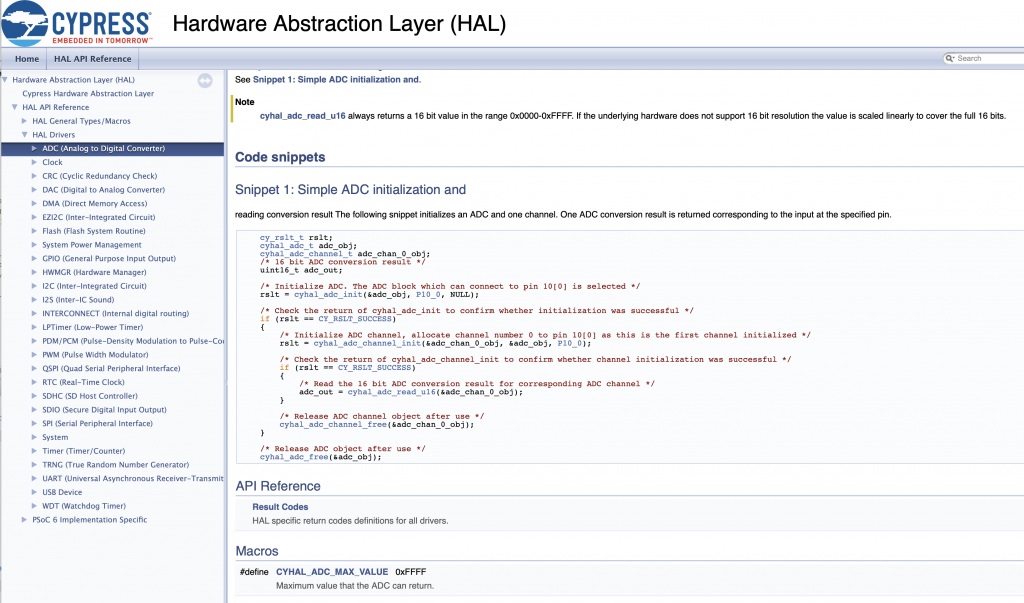