I spent the past week in Nuremberg, Germany at the Embedded World conference doing my day job.  At the show, I spent some of my time teaching people how to program PSoCs.  For some crazy reason they thought that it would be a good idea to give me a microphone and find out what comes out of my mouth- generally that is something semi-crazy and it is always loud.    Here is a picture of me talking to the crowd (I am the one in the blue shirt facing the crowd) 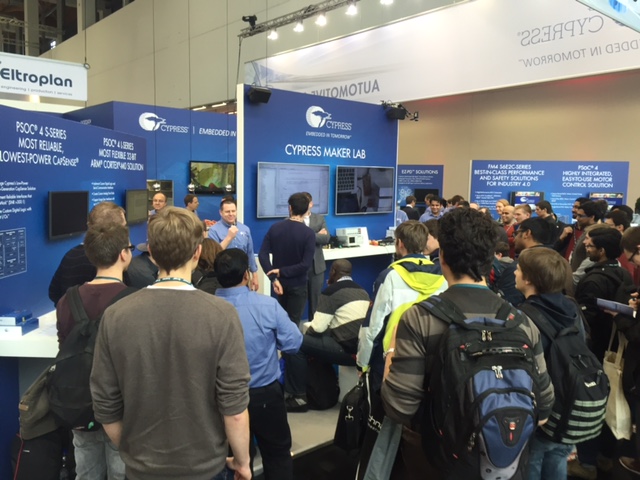 So what did I talk about?  Well, at this show, IOT was the big buzz.  So I decided to teach people how to make an IOT device using the Cypress PSoC 4 BLE.  This was similar to a recent video tutorial that I had made.  I started with a blank schematic in PSoC Creator and a CY8CKIT-042BLE,  I then added a capsense slider, an LED, a PWM, and the BLE component.  Then I showed people how to write the firmware.  I did all of this live, which can make things interesting at times.  At one point on Thursday, my wife called from KY and it seemed like a good idea to answer the phone.  She was a good sport when I put the microphone next to my cell phone and talked to her live during while I was presenting.

You can get the step by step instructions for this project on the cypress.com video tutorials website.  While I talked, the Cypress people handed out free development kits which was a big hit with the crowd.

The morning of the last day I reflected back on the last several years and realized that this show was a coming of age for the Cypress PSoC 4 platform.  We finally had a very robust family of parts from the tiny PSoC 4000 all the way to the large PSoC4200L.  The family had an ARM Cortex M0, Capsense, BlueTooth Smart, CAN, LIN, USB, ADCs, SPI, UART, OP Amps, Analog Mux and Programmable Digital Blocks.  In addition to the chips, we had a big library of well written application notes,  a bunch of cool development kits and best of all we had PSoC Creator which is an amazing, magical, free IDE for building your projects.

On Monday, we had just announced the new PSoC4000S (S stands for small) with a new low power capsense block that included mutual capacitance sensing.  During the show we were using a new “stamp” board to show off the chip.  In the next post Ill show you what I did on the airplane ride home from Germany. 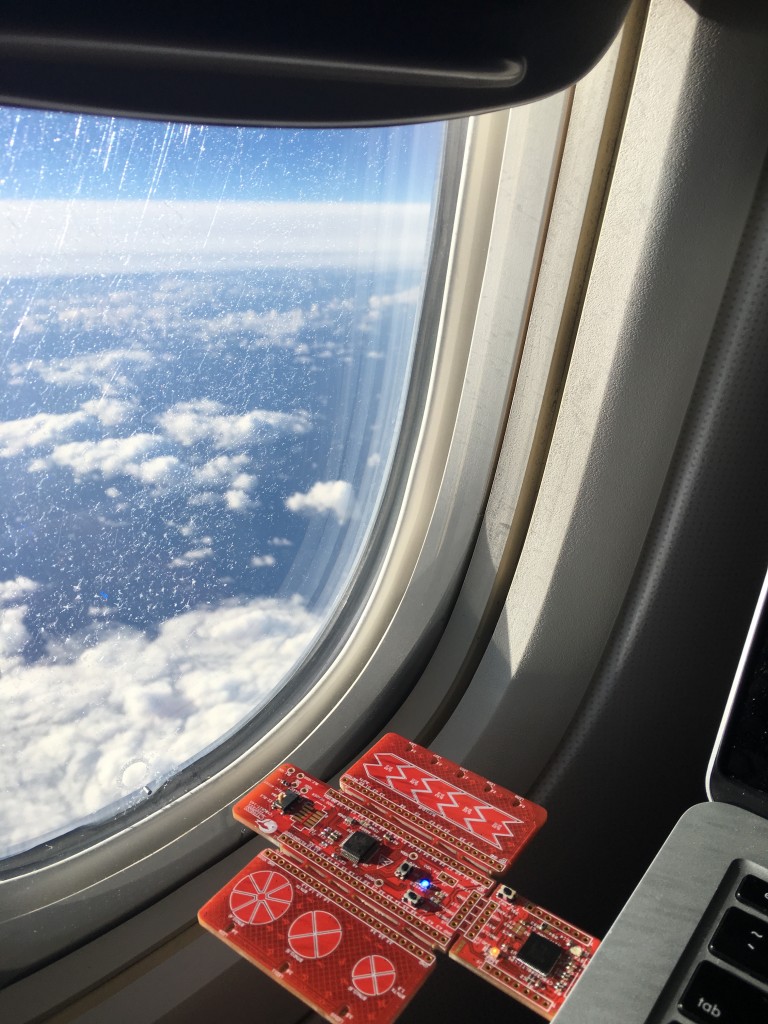