This morning I saw something exciting.  When I went to the ARM mbed-os GitHub site I saw the latest accepted merge commit was from vmedcy and it says something interesting.  “Add Cypress PSoC 6 Targets”.  I cannot even begin to describe how gratifying it is to see this commit.

But what does it mean?  Lets look.  I am using a Mac, so I simply install the MBED-CLI using the instructions found on the MBED CLI webpage.

Like all good embedded people, the first thing to do is make sure that the toolchain and everything else works using a simple blinking LED project.  And, the easiest way to do this is to import the ARM example using: “mbed import mbed-os-example-blinky”. 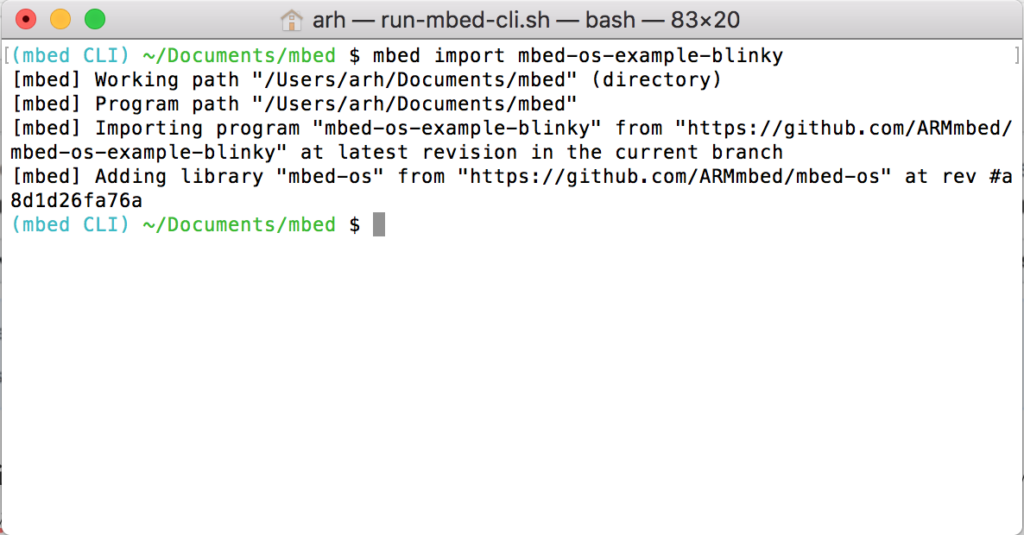 The current release of mbed-os is 5.11.3 which you can see on the Tags page of the mbed-os GitHub site.  Notice in the screenshot above that the commit number for mbed-os is “a8d1d2…”  which means that by default, when you import a project it gives you the “latest” version of mbed-os, which really means the latest official release. 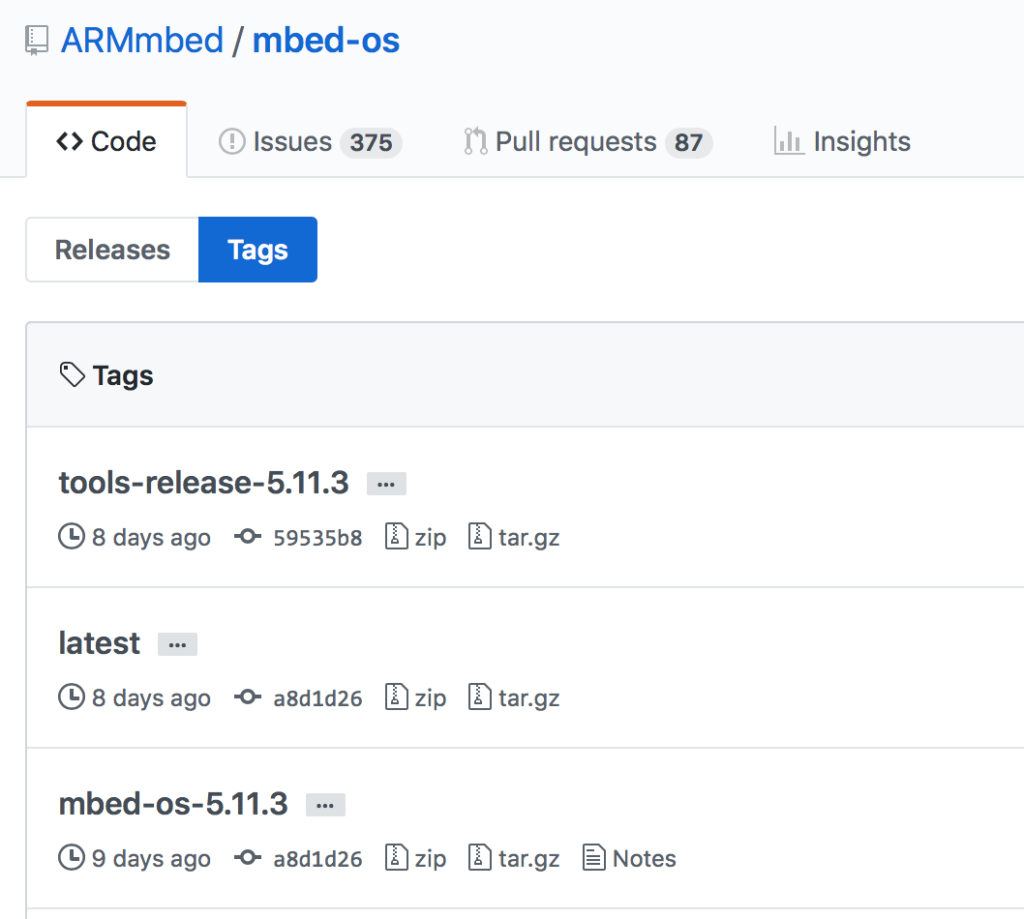 But, I want to use the version that was accepted with the new Cypress stuff (which will become part of the official release starting with mbed-os-5.11.4).  I can do this by running “cd mbed-os” and “mbed update master”.  This will move the git repository to point at the head of the master branch, AKA the latest and greatest.  When I do that I get a version that looks like “32525…”

And when I look at the commit history in GitHub I can see the interesting commit has the same number.

Now to the good stuff.  When I look in the targets directory I see that there is a TARGET_CYPRESS.  Where is see two targets:

When when I look in the Cypress directory I see a bunch of my favorite Cypress PSoC 6 and WICED wireless development Kits. 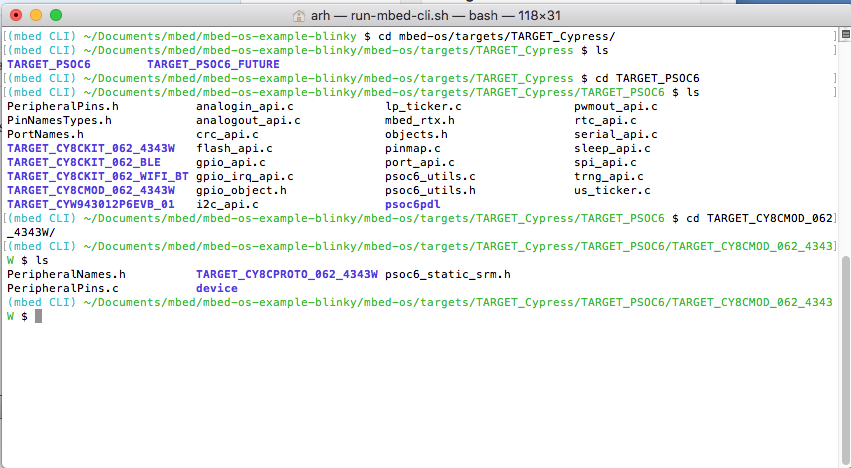 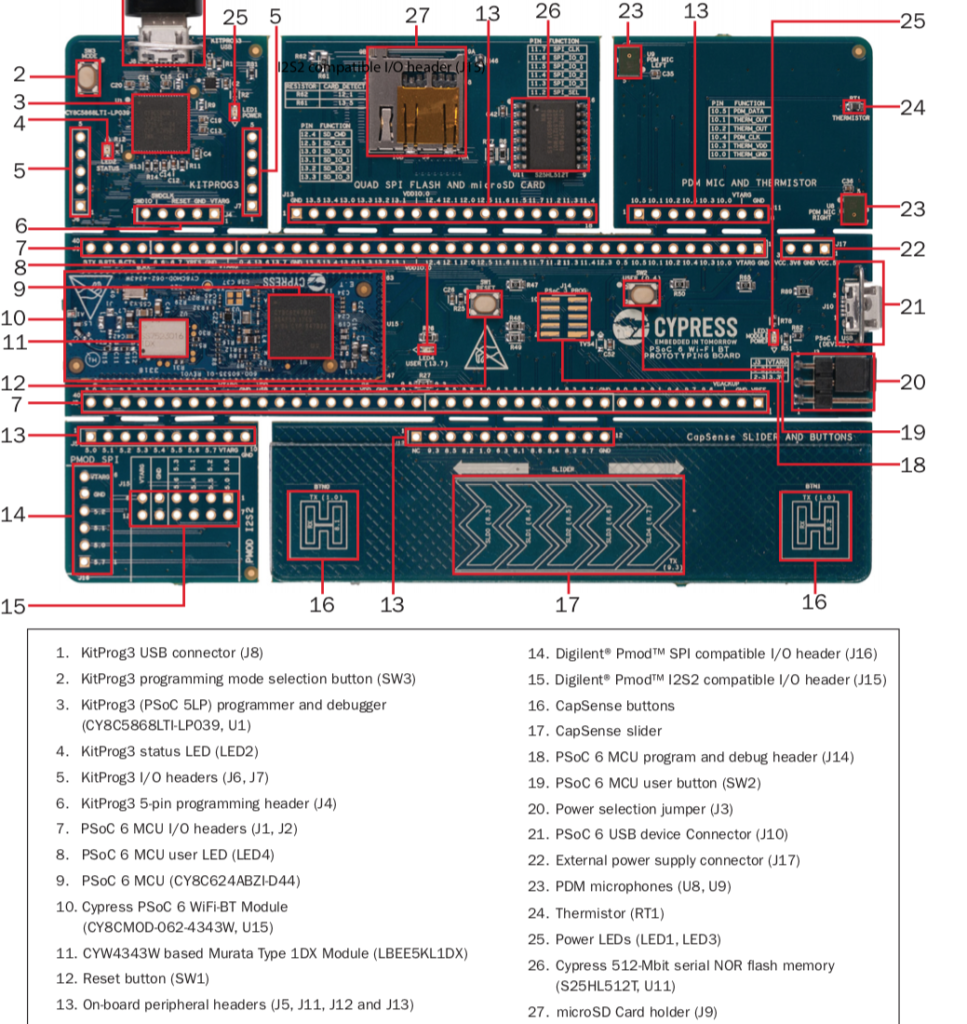 Now we have something to program.  Let’s look at the blinking LED example program.  It resides in the file “main.cpp” which is in the root directory of the “mbed-os-example-blinky”

This looks simple enough, but I am never a fan of “other” stuff in the blinking LED example.  So Ill trim it down to the most basic.

All-right, how do I compile this?  Well, run the mbed command line interface with “mbed compile -m CY8CPROTO_062_4343W -t GCC_ARM“… and after a bit of compiling you should end up with a window like this: 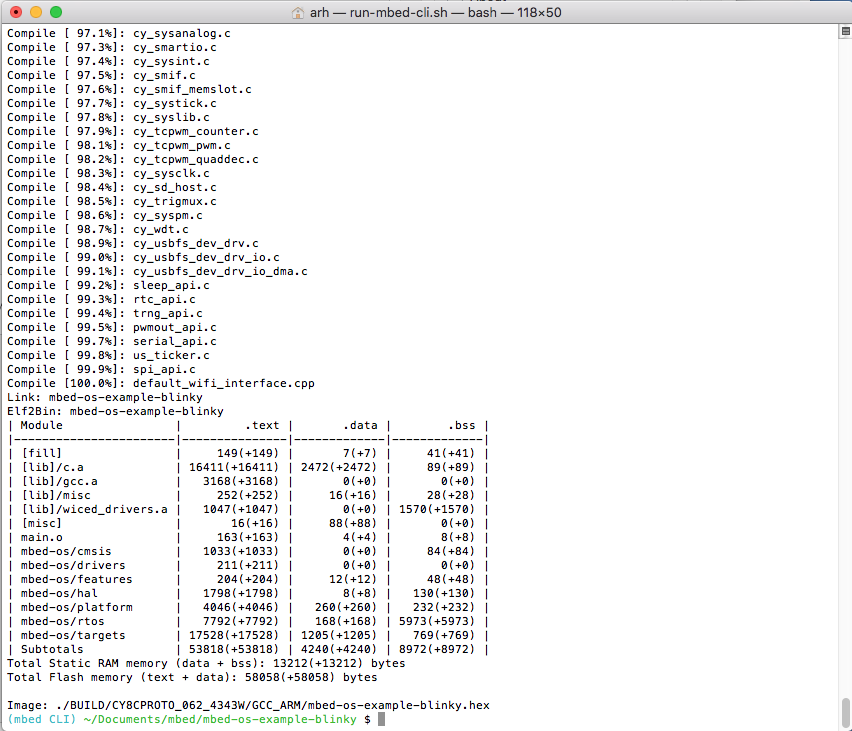 #1 You can add the “-f” option to the command line and it will “flash” the device after it gets done compiling using PyOCD.  In order to do this your development kit’s KitProg 3 must be in the DAPLink mode.  To get into this mode hold down the KitProg button for 2 seconds and the LED will turn off. (If the LED turns on that means you put the programmer into CMSIS-DAP mode, so hold down the button for 2 seconds again).  At the time of this writing the -f option doesn’t work in the released version of mbed-cli,  but that will be fixed shortly with an update to the program debug system in mbed (hopefully by the time you read this)

#2 Copy the hex file from the BUILD directory onto the Mass Storage device called “DAP Link” using the finder. (drag and drop).  To use this method your KitProg needs to be in DAPLink mode.  (so follow the steps above) 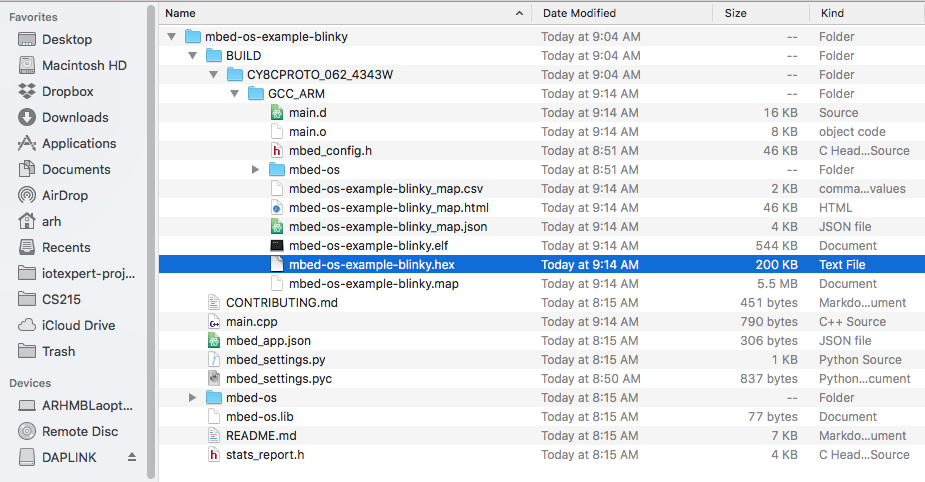 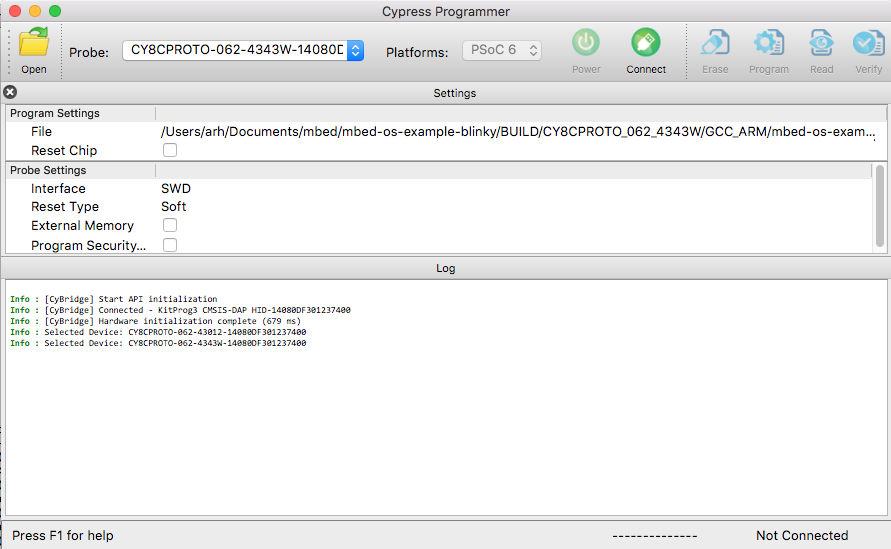 Open the hex file by pressing the “Open” button and navigating into the BUILD directory to find the hex file called “mbed-os-example-blinky.hex” 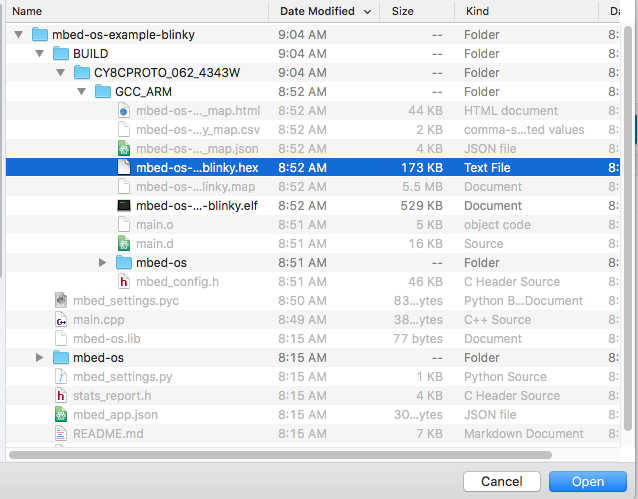 Then press “connect” and “program” 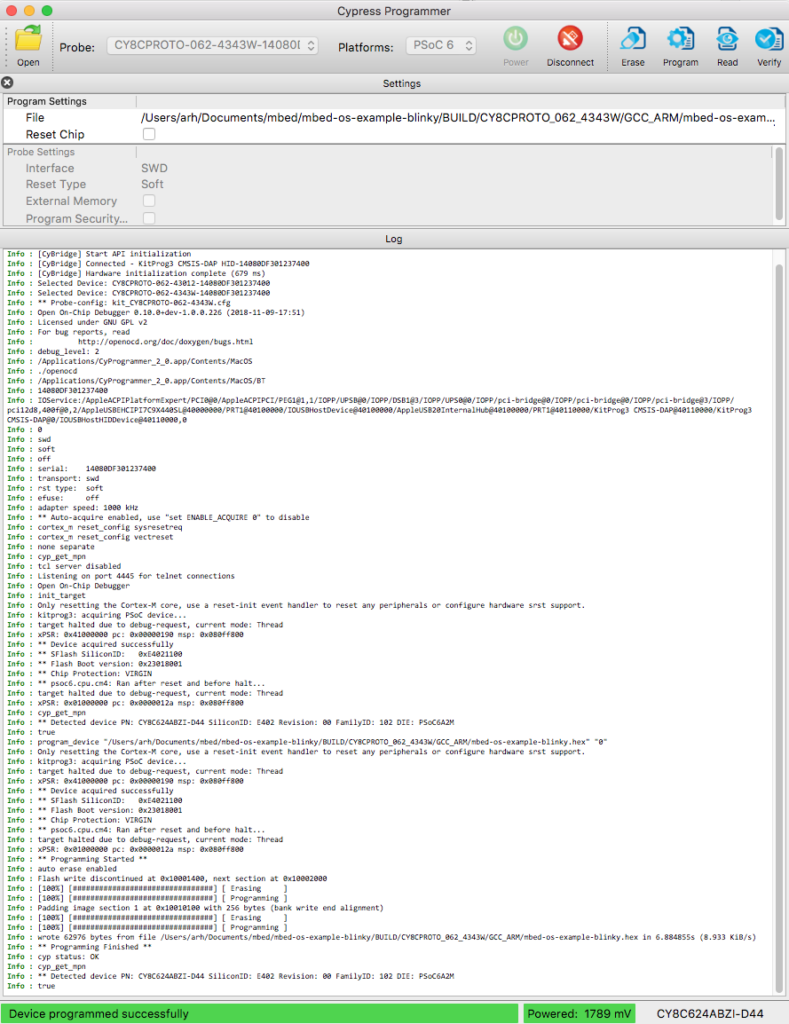 Nothing happens on my development kit?  So I press the reset button and now I get a blinking LED.  But why do I have to press reset?   Do you see the “Reset Chip” checkbox at the top of the “Program Settings” window?  That has to be clicked.  Now when you program, the debugger will reset the chip and you will be off to the races.

So, what was going on with the rest of that program that came by default?  If you attach a serial terminal to the devkit you will see that the blinky example program is putting out information about the RTOS. 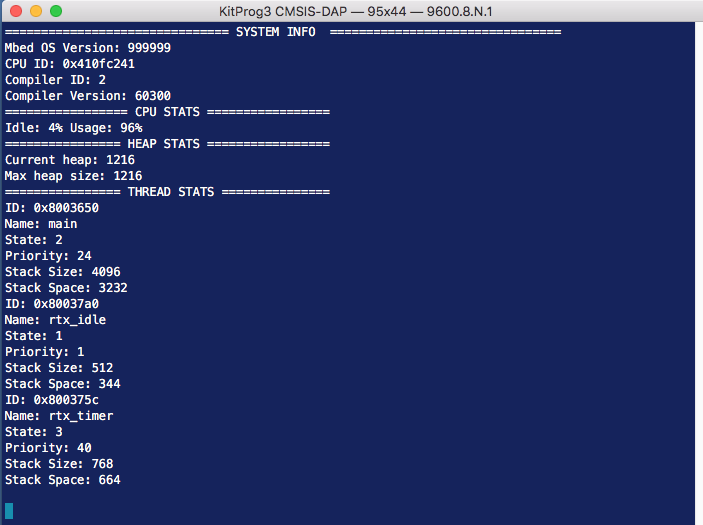 It turns out the mbed-os is really an os… an operation system.  Actually it is a real time operating system that traces it genealogy to RTX, a product from the old Keil Corporation which was acquired by ARM…. a lot more on this later.

One final note that may cause confusion (I certainly have been confused).  There are four different modes of KitProg 3 (the programmer that is built into most of the Cypress development kits).