In the first article of this series I talked about how to make the CY8CKIT-028-EPD EINK Shield work with PSoC 6 and Modus Toolbox 1.1. In the second article I improved the interface and talked about the PSoC 6 clocking system.  In this article I want to address the timing system in the EINK firmware.  You might recall that I used one of the Timer-Counter-Pulse-Width-Modulator blocks a.k.a the TCPWM inside of the PSoC 6 as a Timer for updating the EINK Screen.  Using this timer was a bit of a waste as the CM4 already has a timer built into the device called the SysTick timer.  Moreover, the SysTick timer is connected to the FreeRTOS timing system which provides you APIs to talk to it.  For this article I will talk about:

The ARM Cortex-M MCUs have an option to include a 24-bit timer called SysTick.  As best I can tell, every MCU maker always chooses to have the SysTick option built in.   Certainly the PSoC 4 and PSoC 6 family all have it built in.   But how do you talk to it?  Well, my buddy Reinhard Keil decided that it was silly for everyone to create a different method for interacting with standard ARM peripherals so he created the Cortex Microcontroller Software Interface Standard (CMSIS) 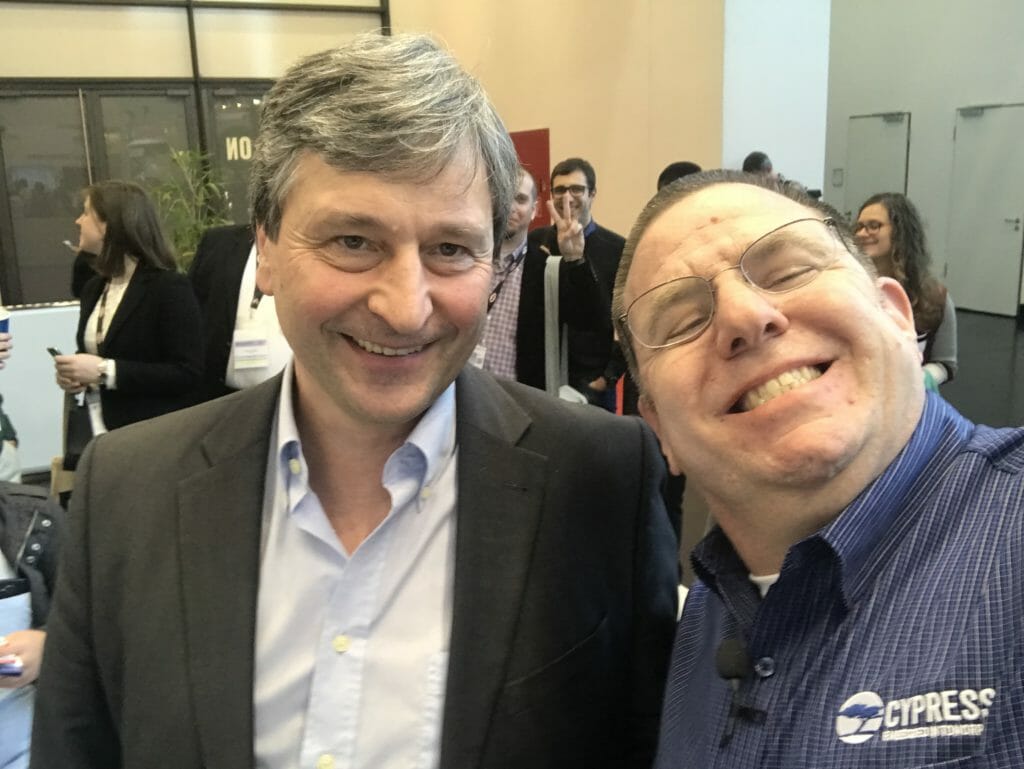 It is interesting to note that the symbol SystemCoreClock is also defined by CMSIS as the frequency of the clock.  So the above call would setup the SysTick to be called every 1Ms (that is why there is a divide by 1000).

Here is an example I created starting with the BlinkyLED example project.  After I created the project, I added the kitprog uart (which is SCB5) and I added the Retarget I/O middleware.

Don’t forget to setup the standard i/o by modifying stdio_user.h

When you run the program above you should get something like this: 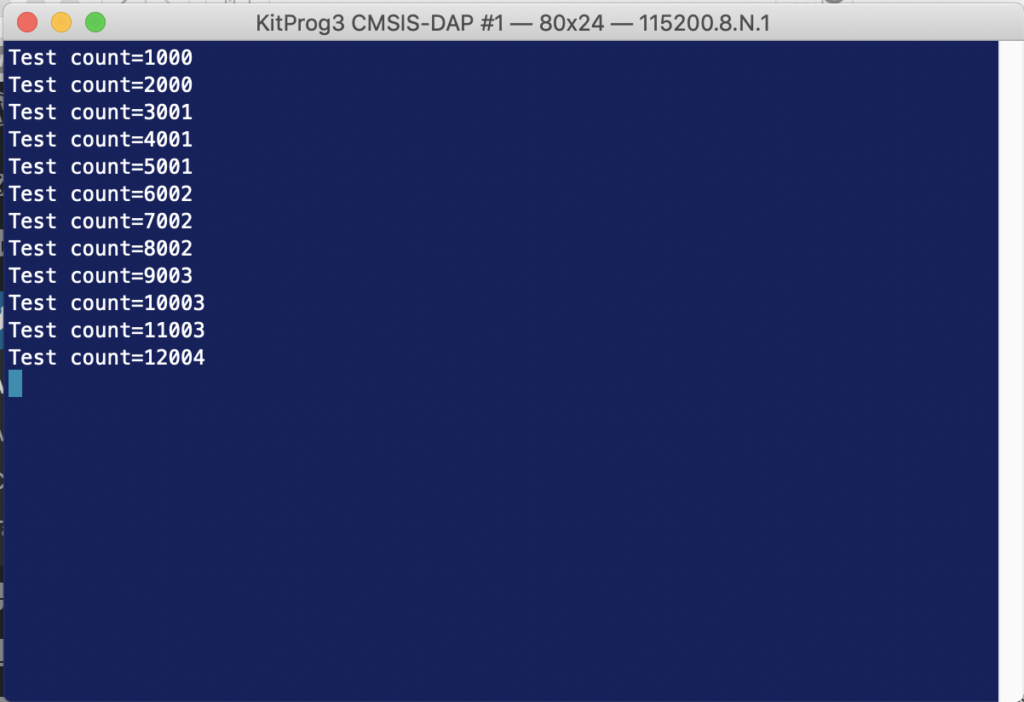 One interesting question is HOW does the function SysTick_Handler get into the vector table?  Well if you run an eclipse search (type ctrl-h) 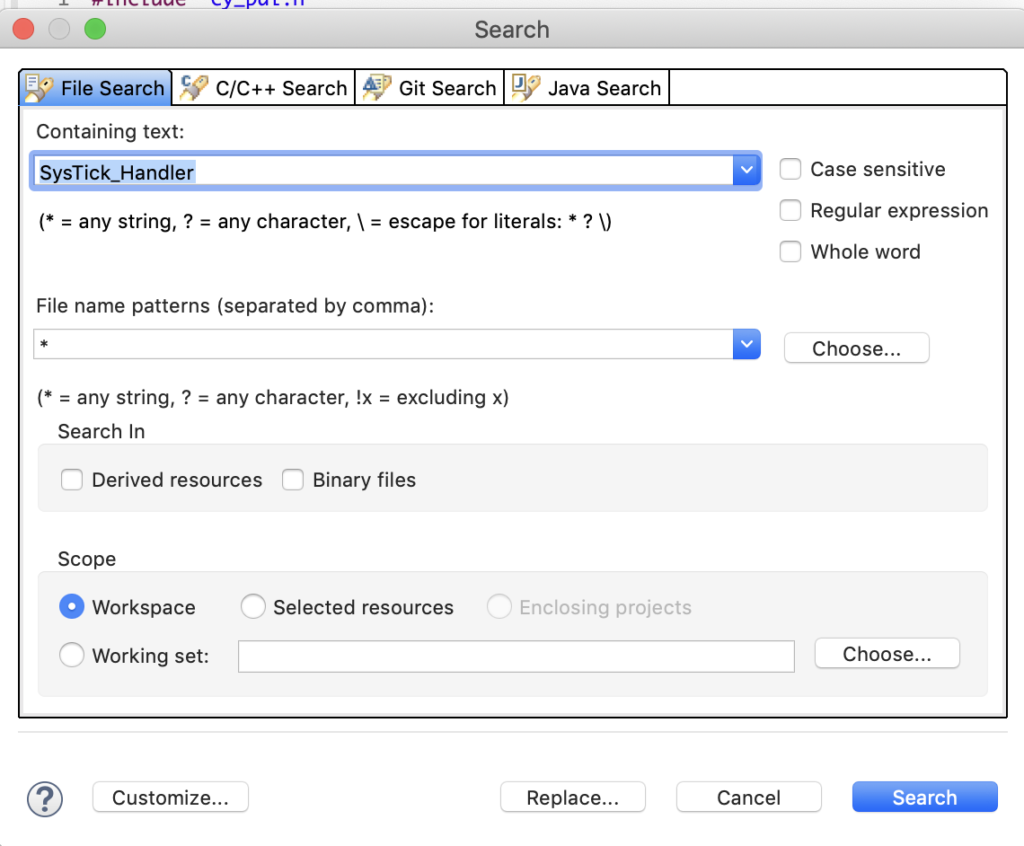 You will find it in an assembly language file called “startup_psoc6_01_cm4.s”

Double click on the file and you can see the Vector table.

But how do the _Vectors get into the right place?  Well? run the search again and you will find that the linker script (which Cypress created) for your project has the definition. 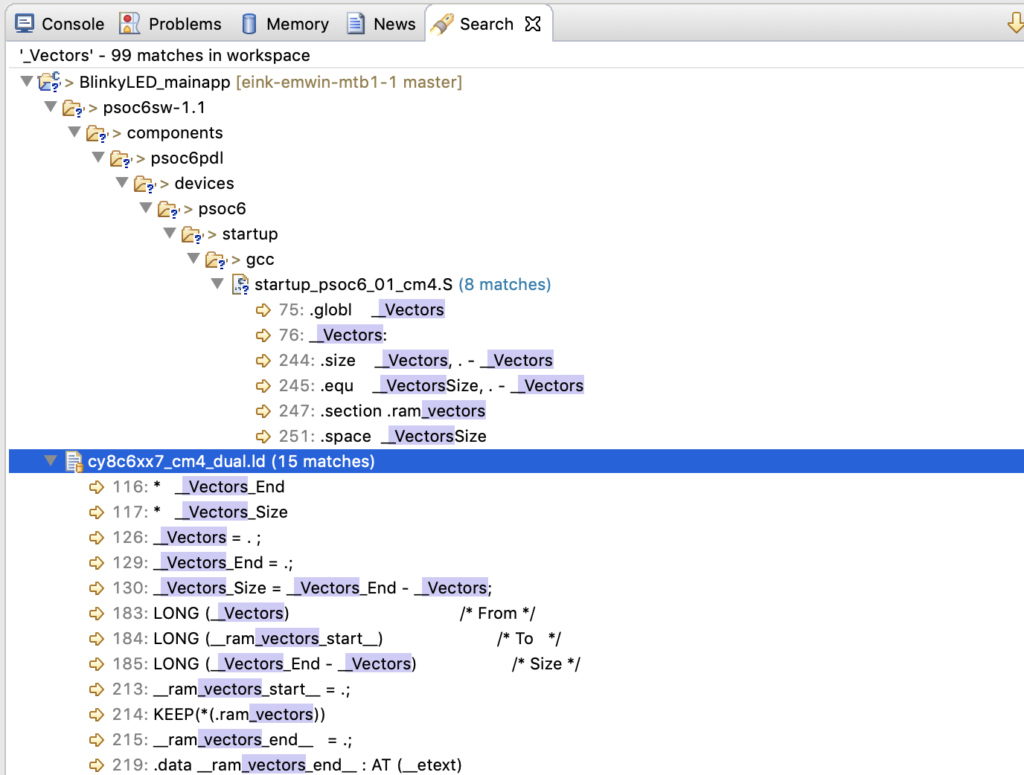 And when you look at the linker MAP file which is in your project Debug/BlinkyLED_mainapp.map you will see that the vectors end up in the right place.

Now if you happen to be reading the PDL documentation on Saturday afternoon you might notice that there is a section of the documentation called “SysTick”.  And when you click it you will find this: 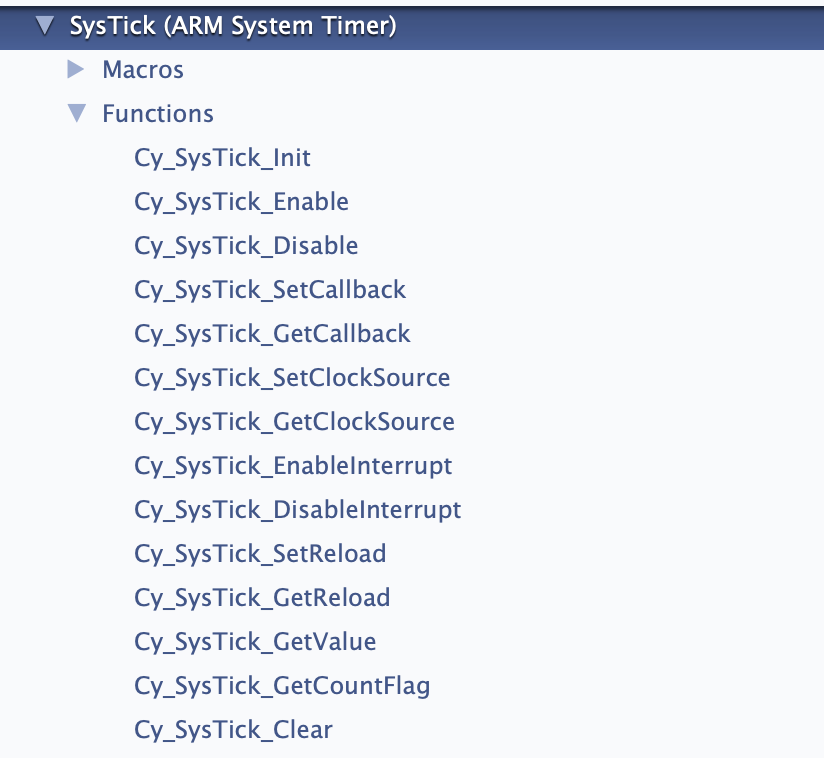 And you might ask yourself “What the hell.. those aren’t CMSIS functions?”  Well in typical Cypress fashion we created an extension to SystTick.  It does two basic things

For this example I modified the previous project by commenting out the CMSIS calls.  And I use the Cy_SysTick calls.

When you look at this program you might ask where I got the “100000000/1000″…. and if Hassane is reading he will ask WHY DIDN’T YOU COMMENT IT.   The answer to the first question is that it is the CPU Frequency divided by 1000 to get a millisecond timer. 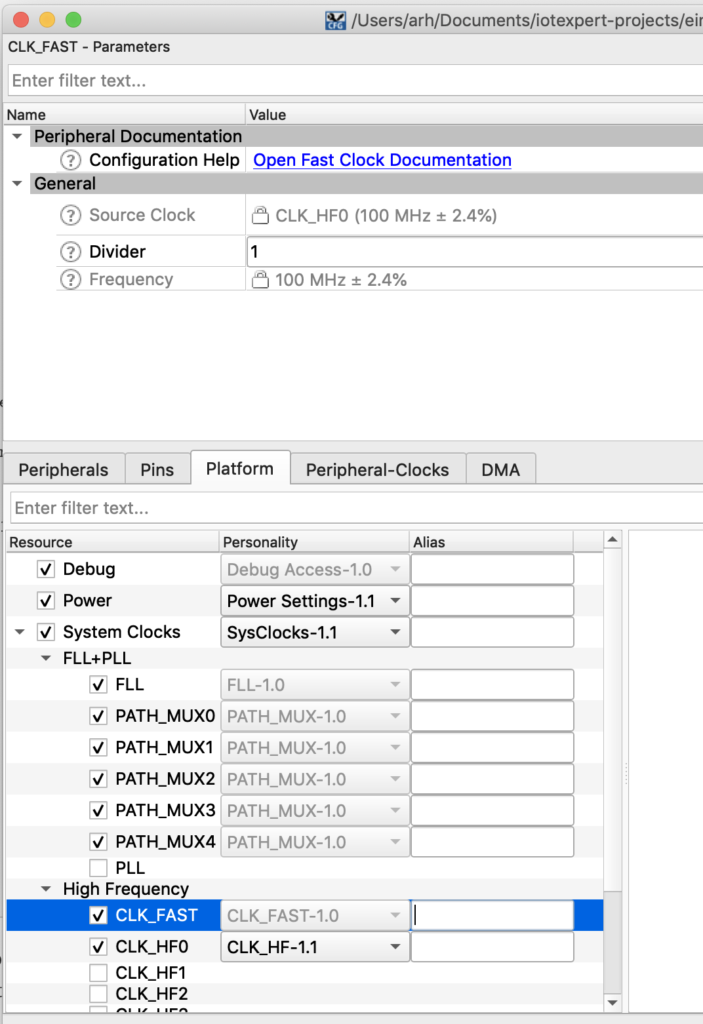 As to the second question… the answer is … “I just did” 🙂

And finally the “// slot 0”  means that it uses the first of 5 slots… in other words places where you can store a callback.

The FreeRTOS by default uses the SysTick timer to cause the scheduler to run.  And it does this by using the CMSIS interface… well because everyone needs to do their own thing, it actually lets you define the function.  Here is a clip out of FreeRTOSConfig.h where it defines the actual function name as xPortSysTickHandler.

And when you look around (using find) you will find it in the file port.c.

And if you look in vTaskStartScheduler you will find that it calls the function vPortSetupTimerInterrupt where it sets up interrupt manually.

And what is really cool is that when you look in FreeRTOSConfig.h you can see that it uses the CMSIS macro “SystemCoreClock” and that it is configured to have a 1MS callback.

So, why did I look at all of that?  Well simple, each time that the SysTick interrupt is called, the FreeRTOS adds 1 to a count…. which you can get access to by calling “xTaskGetTickCount”.  Nice.

I think that is enough background… so let’s:

I want to start by creating a copy of the project from the previous article (so that alls yall can see the progression of code changes).  In the previous article I walked you step-by-step through creating and copying a project.  Here is a summary of the step you need to take.  If you want to see the details please look at the last article.

After making all of these changes I will have a project in my workspace called “EHKEinkTiming”.  I would recommend before you go further that you build and program to make sure that everything is still working.

All of the action to dump the frame buffer onto the EINK display happens in the function UpdateDisplay in the file eInkTask.c.  In the code below you can see that I ask FreeRTOS what the count is before I dump the display, then what the count is after it is done.

When I run the updated program I find that it takes about 1.7 seconds to update the screen. 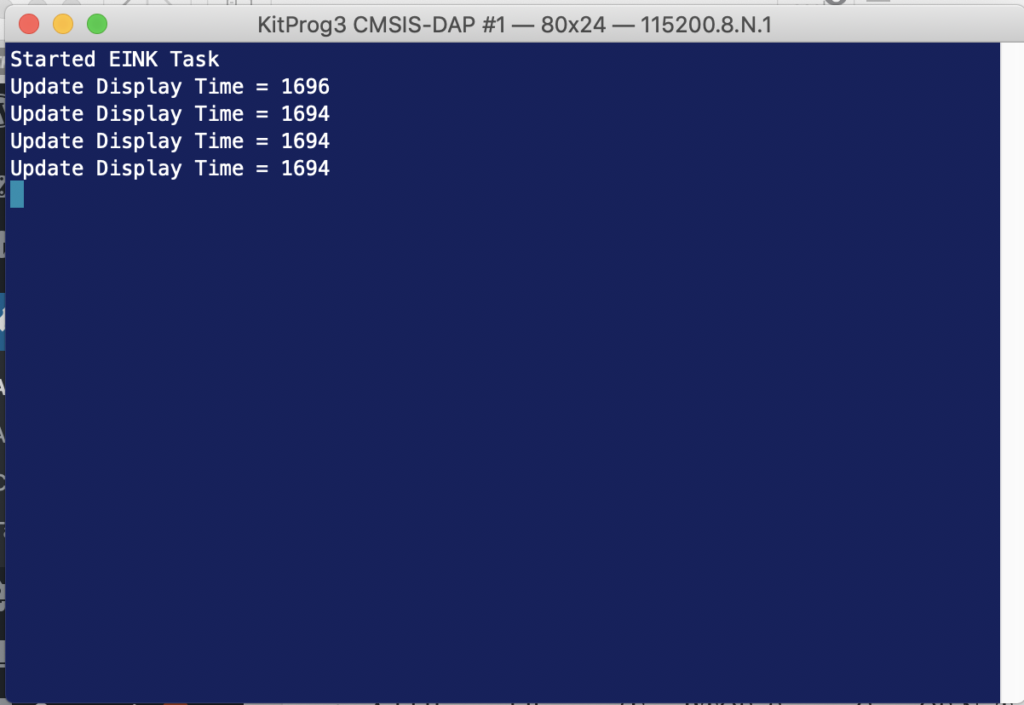 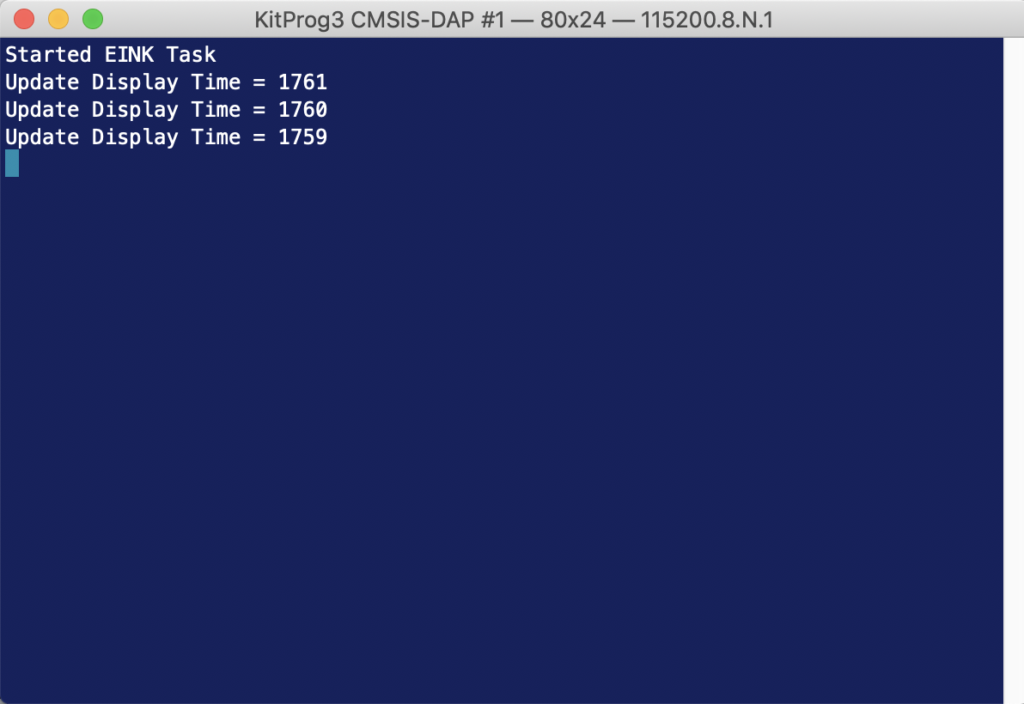 And yes if you can do math, which I’m sure everyone who has read this far can, you will notice that I only sped things up by 65 Milliseconds… which means you need to call bullshit on my original declaration that it was noticeably faster.  Oh well at least I learned a bunch about the clock system.

OK now that we have the hang of SysTick, it is clear that we don’t need the hardware timer that we put into the first project, so let’s get it out of there.  Start by running design.modus and removing the timer.  Just click the checkbox on “TCPWM[1]…” to turn it off.  Then press save.

If you hit compile you will find a whole bunch of errors… but they are all in four functions inside of cy_eink_psoc_interface.c.   Specifically

Then update Cy_EINK_TimerInit to just store the current FreeRTOS timer value in my new global variable.

Next update Cy_EINK_GetTimeTick to return the number of ticks since the timer was initialized.

Finally, make the TimerStop function do… well… nothing.

When I build and program… my project is off to the races without the hardware timer.

In the next article Ill have a look at the EINK datasheet and driver to look into how it works.