In the previous article I showed you how to use the FreeRTOS task notification mechanism to replace a binary semaphore.  In this article I will build PSoC FreeRTOS Task Notification Value firmware.  Every FreeRTOS task has one built-in “uint32_t” which you can use to pass information between the task that sends the notification and the task that receives the notification.  In this article, instead of using the task notification as a binary semaphore, I will use it as a Queue of depth 1 that can hold one 32-bit word.  I will also show you a lesson that I learned about the interrupt registers in the SCB UART.

I start by copying the project 9-TaskNotify and calling it 10-TaskNotifyValue.  I thought that it would be interesting to pass the cause of the UART interrupt to the UART Task, so that it could be told to the user.  To do this I call “xTaskNotifyFromISR” instead of “vTaskGiveFromISR”.   This function lets me set the value of the FreeRTOS Task notification value, is case to the bit mask of the cause of the UART interrupt.  The function also lets you specific if you want to

In the UART_Task I take the value and then clear all of the bit (aka set it to 0) when I exit.

When I first wrote the program I had something “weird” happening.  Specifically it looked like I was getting the interrupt service routine called twice: 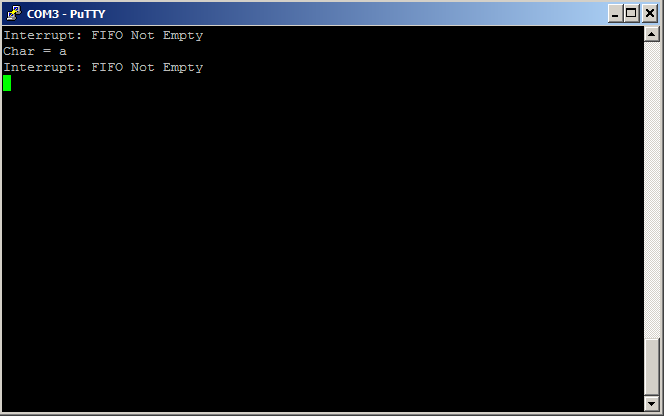 But, what happens is:

Each time I start thinking that I know what I am doing, I find something else to learn.  I suppose that is what makes this whole thing fun though.