Have you ever wondered about the nature of time?  Given the demographics of my readers I am quite sure that all of you have pondered this topic.  In this article I will solve one of the great mysteries of human kind.  What time is it?  Well that may be a little bit over dramatic 🙂  Actually what I will show you is how to use the CY8CKIT-062S2-43012 development kit to get time from the internet using the Network Time Protocol (NTP), update the PSoC 6 RTC and display it on the CY8CKIT-028-TFT using MBED OS.

Unfortunately I will not show you a beautiful way to convert UTC to Eastern Time because I don’t actually know what that way would be which is very frustrating.  Every way that I know requires me to drag a lot of crap into my PSoC6 which I don’t really want to do. 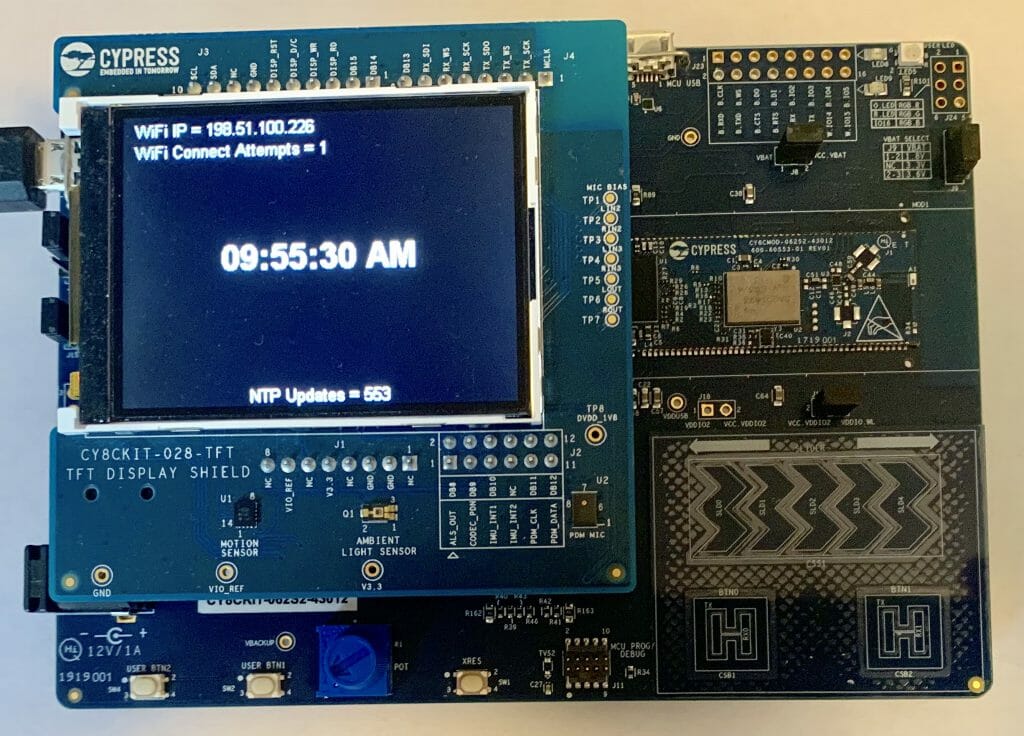 For this article I will discuss:

You should start this project by creating a project by running “mbed new NTPDemo” or by using mbed studio to create a new project.  To run this project requires at least mbed-os-5.13.3.  You have two basic choices to get the latest mbed.  For some reason which I don’t totally understand when you run mbed new it gives you a slightly older version of mbed-os.  To get a new version you can either “cd mbed-os ; mbed update mbed-os-5.13.3” or to get the latest “cd mbed-os ; mbed update master”.

In this project I use three libraries, emWin, the IoT Expert ST7789V library (for the display) and the ntp-client library.  To add them run

The emWin library requires that you tell emWin about which version of the library .a to link with.  You can do this by adding this to the mbed_app.json

For this project I will use one of the cool RTOS mechanisms that is built into MBED OS,  the “EventQueue“.   There is a nice tutorial in the MBED OS documentation.  An EventQueue is a tool for running a function “later” and in a different thread context.  What does that mean?  It means that there is a thread that sits around waiting until you tell it to run a function.  You tell it to run the function by pushing a function pointer into it’s EventQueue.  In other words, an EventQueue is a thread that waits for functions to be pushed into queue.  When the function is pushed into the queue it runs it.

How is this helpful?  There are a several of reasons.

When MBED OS starts it automatically creates two of these event queues one of the queue threads runs at “osPriorityNormal” and can be accessed via mbed_event_queue();  The other event queue runs at “osPriorityHigh” and can be accesed by mbed_highprio_event_queue();  For some reason (which I don’t understand) these queues are documented on a separate page.

Here is a picture of the architecture of my program.

The main function which is also the main thread, which then becomes the WiFi Thread

Display EventQueue is used to run functions which update the display.  By using an EventQueue it ensure that the Display updates happen serially and there are no display resource conflicts.  The four functions are

When I started working on this program I had a bug in my connections so I added the ability to tell how many WiFI connections attempts had happened.  I also wondered how many times there might be a disconnect if I ran this program a long time.  The answer is I ran it for two days and it didn’t disconnect a single time.  This function simply takes a number from the caller and displays it on the screen.  Notice that I use snprintf to make sure that I don’t overrun the buffer (which I doubt could happen because I made it 128 bytes).

I was curious how many times the NTP connection would happen.  So I added the ability to display a count.  Notice that I use a static variable to keep track of the number of times this function is called rather than pushing the number as an argument.  Perhaps this is a design flaw?

The main display function is the seconds which is displayed in the middle of the screen.  I get the time from the RTC in the PSoC and is set by the NTP Server.  Notice my rather serious hack to handle the Eastern time difference to UTC… which unfortunately only works in the Summer.

The Network Time Protocol was invented in 1981 by Dr. David Mills for use in getting Internet connected computers to have the right time.  Since then it has been expanded a bunch of times to include Cellular, GPS and other networks.  The scheme includes methods for dealing with propogation delay etc.  However, for our purposes we will just ask one of the NIST computers, what time is it?

The way it works is that you setup a structure with 48 bytes in it.  Then you open a UDP connection to an NTP server (which NIST runs for you) then it will fill out the same structure with some time data and send it back to you.  Here is the packet:

The code to send the packet is really simple.  The only trick is that when you send data on the network you almost always use big endian, so you need to use the function nthol to convert.

The four numbers are

Given that the PSoC 6 RTC counts in seconds you can just ignore the partial seconds.

At the top of main I registered to WiFi that I want a callback when the state of the WiFi changes.

This function does two things.

Here is the whole program.