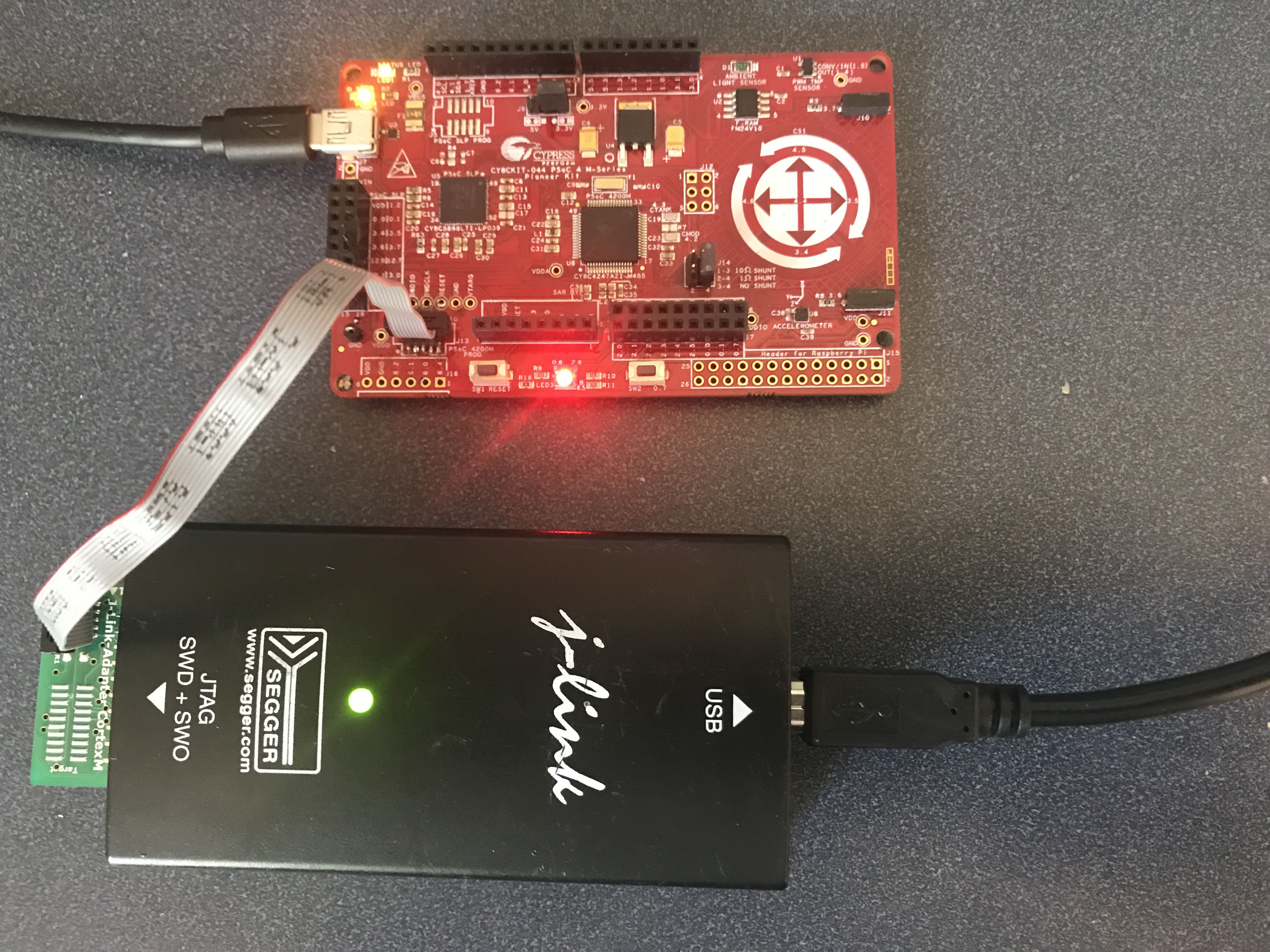 As you have probably noticed, I have spent a significant amount of time in the last few months doing FreeRTOS projects.  One thing that I have been continuously frustrated about is a lack of analysis tools.  How much memory am I using?  How much stack and heap are free?  How long are tasks taking?  How do you get the priorities set right?  And on and on.  A couple of weeks ago I got an email from the guys at Percepio asking me if I wanted to try out the Percepio Tracealyzer.  I said yes… but that I was really busy and it was going to take a while for me to get to it.  So now I have… and this is the first article about the Percepio Tracealyzer.  Unfortunately the story involves me burning myself with a soldering iron but I suppose that isn’t their fault.

In this series of article’s I will instrument the FreeRTOS projects that I have been showing you with the Percepio Tracealyzer Recorder Library, then run the tool to see what is going on.  In this specific Article I will show you how to get the most basic Tracealyzer functionality going on a PSoC4200M.

The way that Percepio Tracelzer works is that you install a bit of code into your project called the Tracealyzer Recorder Library.   In streaming mode, the code creates a new task in FreeRTOS called “TzCtrl” which interacts with the FreeRTOS kernel to record all of the running task information into a communication link (e.g UART, SPI, JLINK RTT, etc.)  In snapshot mode, the kernel information is just written to an SRAM buffer inside of the PSoC.

This is the architecture picture from the Percepio website: To make the Percepio Tracealyzer work you need to turn the “Snapshot or streaming” line from the picture above into a real connection.  In snapshot mode there are two ways (I think) that you can do it.

When our very good devkit team team in India built the CY8CKIT-044 (which I have used and written about quite a bit), they installed a built in debugger/programmer called “KitProg“.  But they also understood that someone might want to connect some third part debugger like the JLINK.  So… they put the footprint for a 10-pin ARM debugging port onto the board. (see it in the lower left).  Actually if you look at the board, you can see two 10-pin footprints, the one at the top is connected to the PSoC5 (which serves as the KitProg). 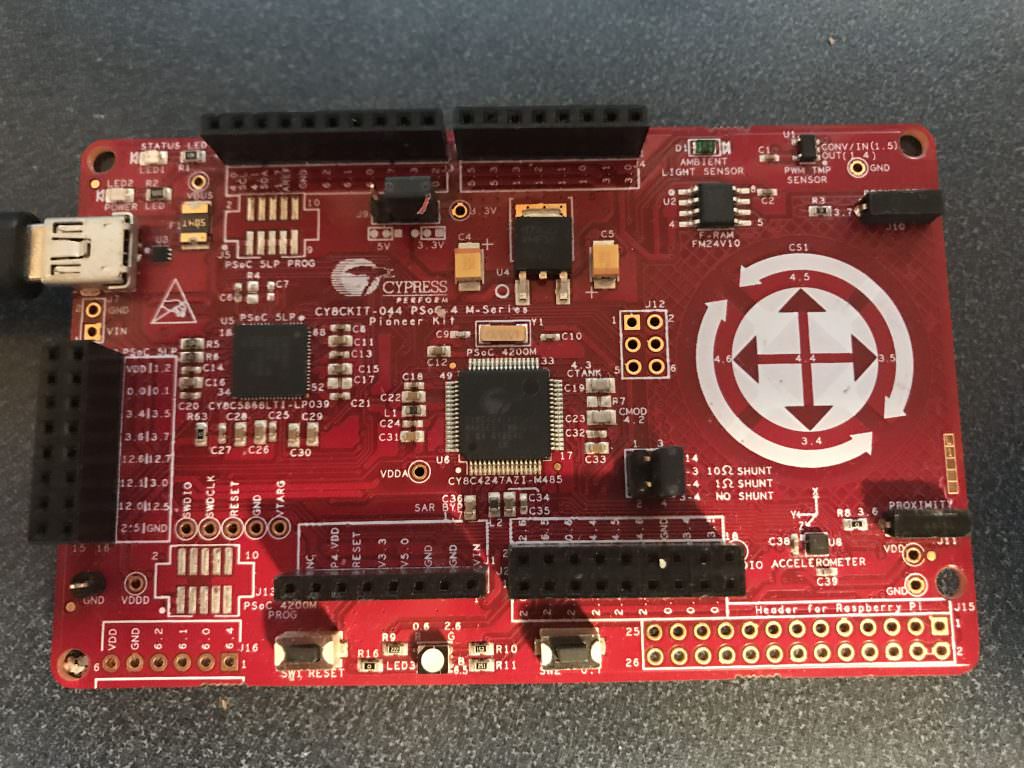 Before I can use a JLINK I needed to do this … which unfortunately ended with me burning myself with the soldering iron… bad Alan. 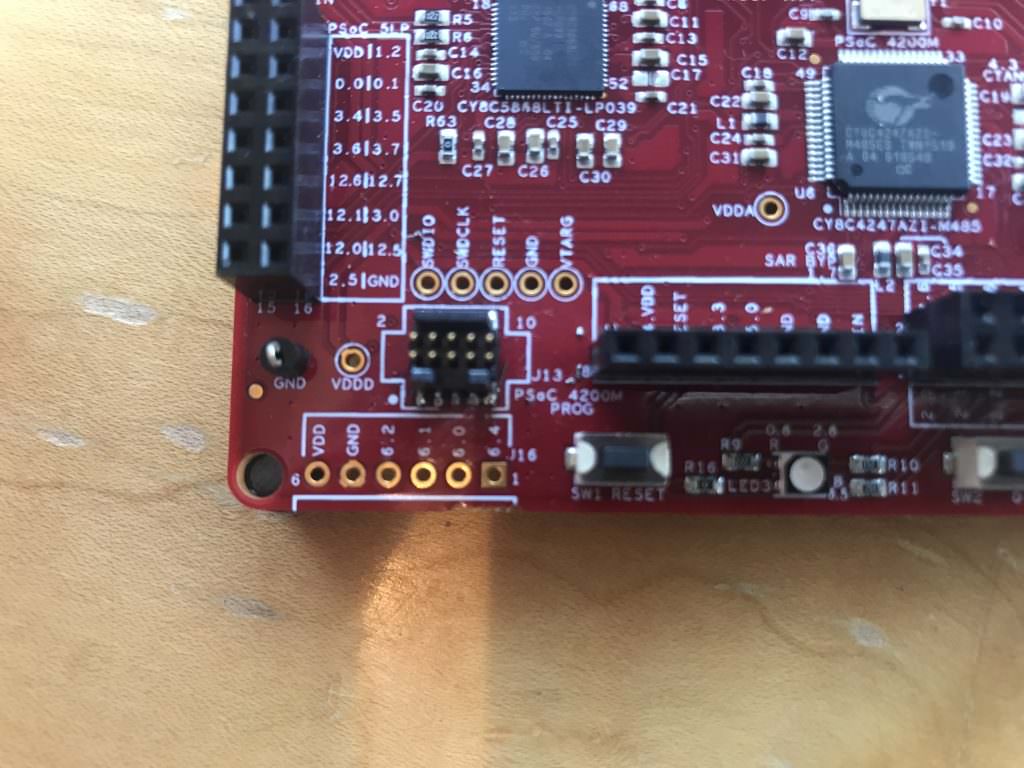 In a previous article I talked about the organization of PSoC Creator projects, specifically how to handle the situation where you want to include .h/.c files into your project but you don’t want to modify them.  This is exactly what I will do with the Percepio Tracealyzer Recorder Library.  The library has some files which I will want to leave intact and I will just make references to them in my project including trcKernelPort.h, trcPortDefines.h etc.  And there are some files which I will want to modify, which I will copy out of the Trace Recorder Library into my project for editing trcConfig.h, trcSnapShotConfig.h and trcStreamingConfig.h

To start the first Percepio Tracealyzer example I will use the basic “Snapshot Mode”.  There is good documentation on the Percepio Tracealyzer documentation website.  I will start by copying the PSoC Creator Workspace from the FreeRTOS articles from GitHub.  It has 9 projects in it, starting with the blinking led, going to a more complicated multi-thread project.  The next step is to download the FreeRTOS Tracealyzer library from the Perceio website into a parallel directory called “TraceRecorder”. 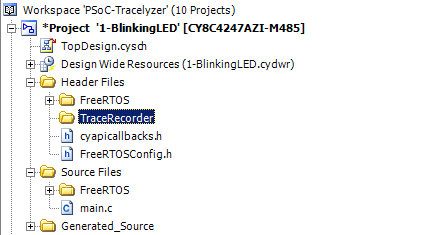 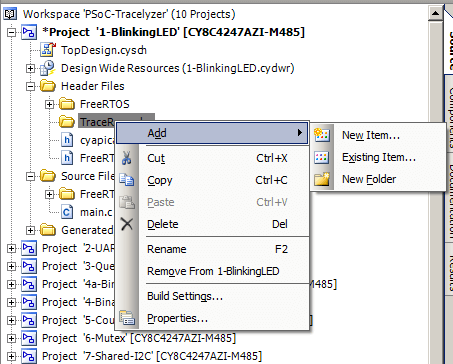 They reside in the directory TraceRecorder/include 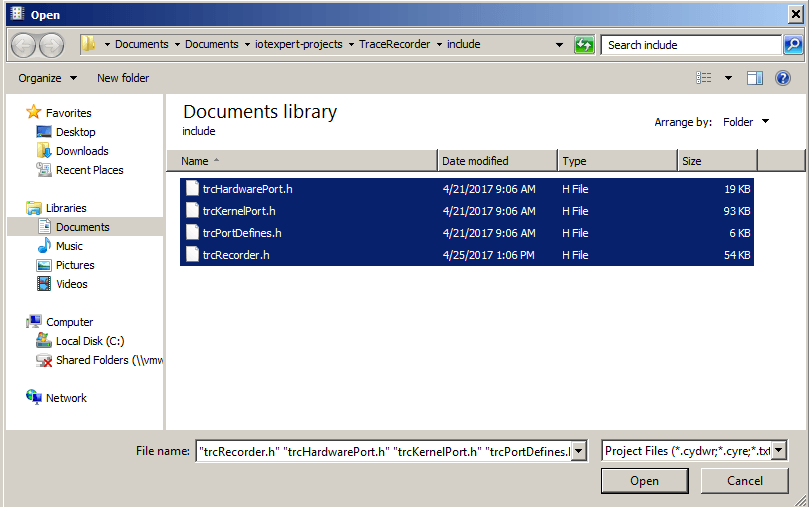 Once I have the unchanging .h’s into my project, I need to add their directory to the include path.  To do this right-click on the project and select “Build Settings …” 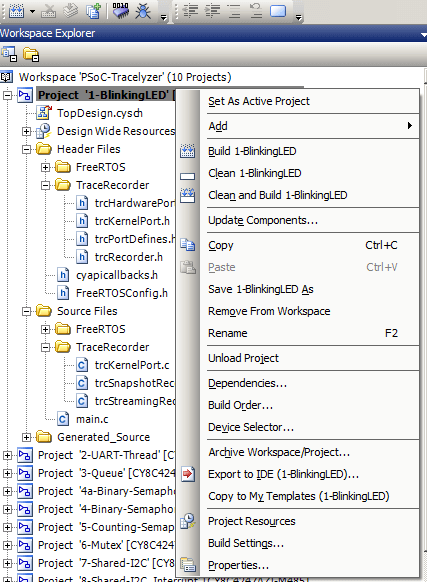 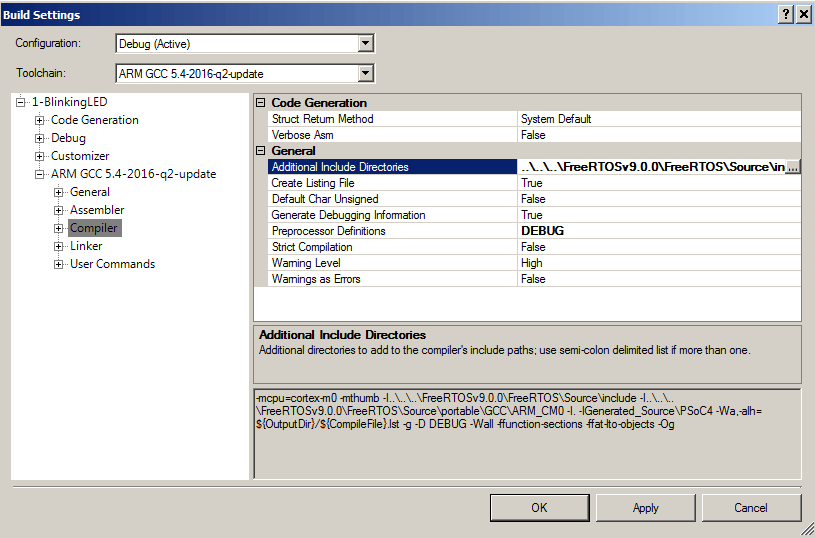 Navigate until you get to TraceRecoder/include then press “Select Folder” 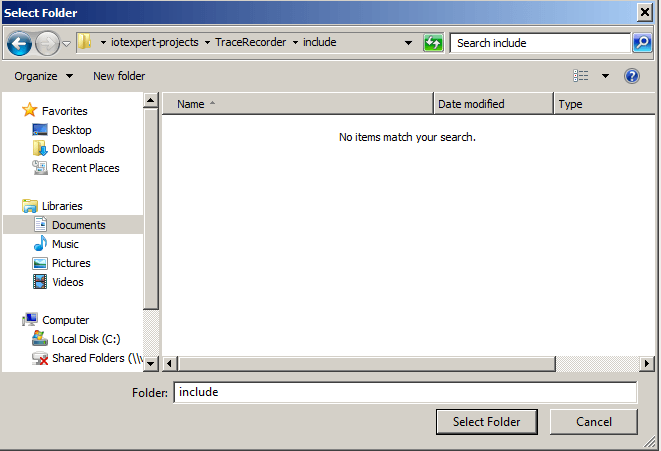 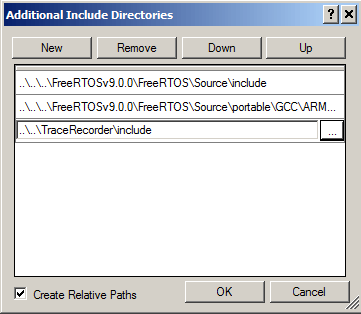 Next, I want to copy the configuration files in the Windows Explorer to my project directory so that they become a changeable part of they project.  They reside in TraceRecorder/config (I just did a Ctrl-C to copy) 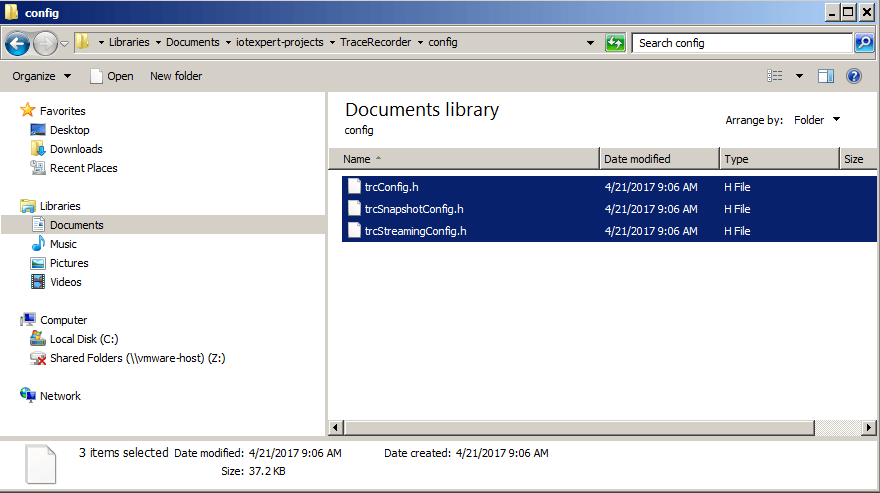 You want to paste them into your project directory 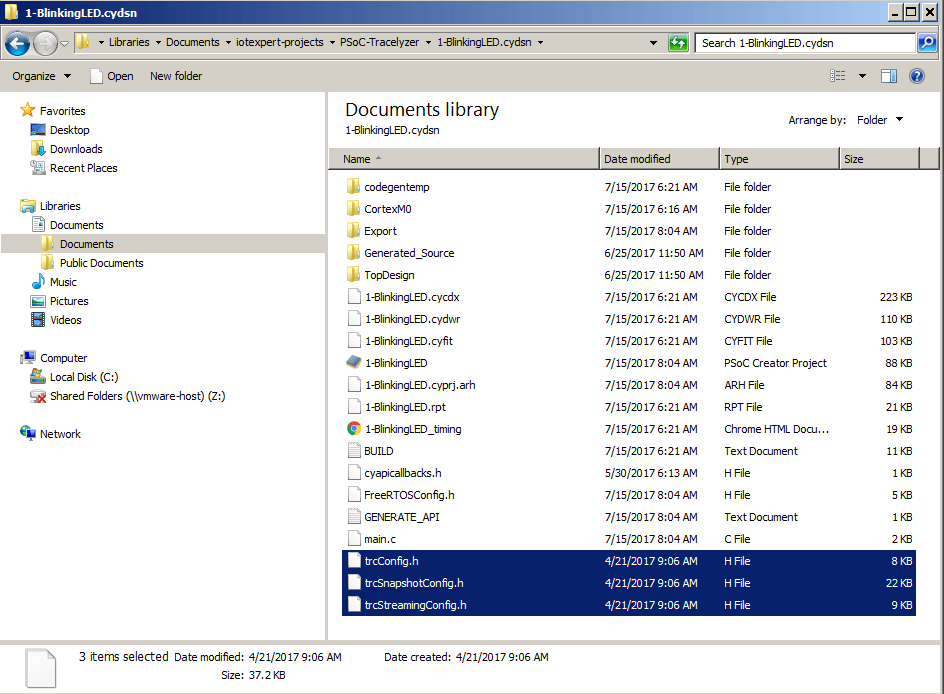 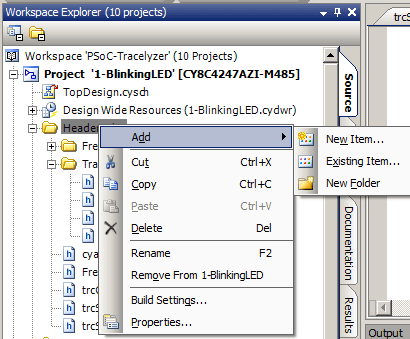 Then selecting them out of your project directory. 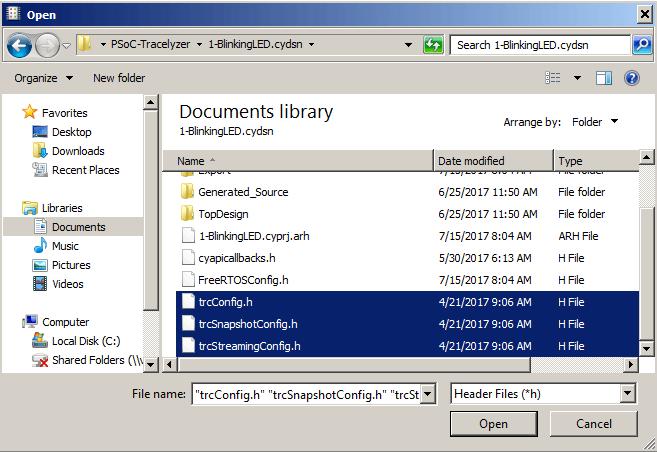 Now we need to add references to all of the .c files.  Start by making a new folder for the c-files called “TraceRecorder” 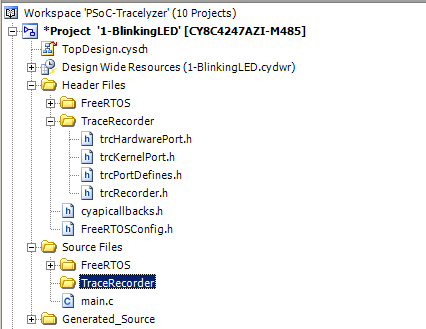 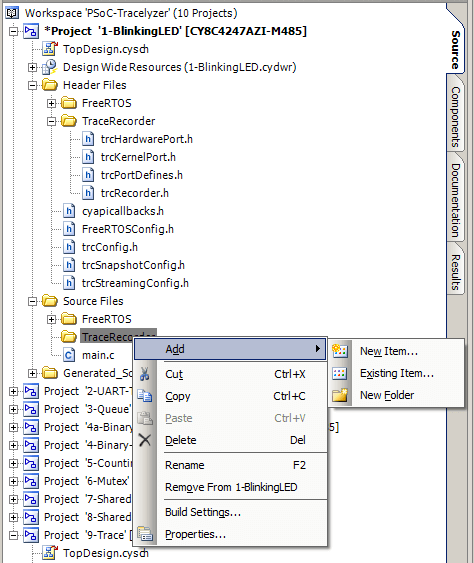 Select the files from the TraceRecorder directory 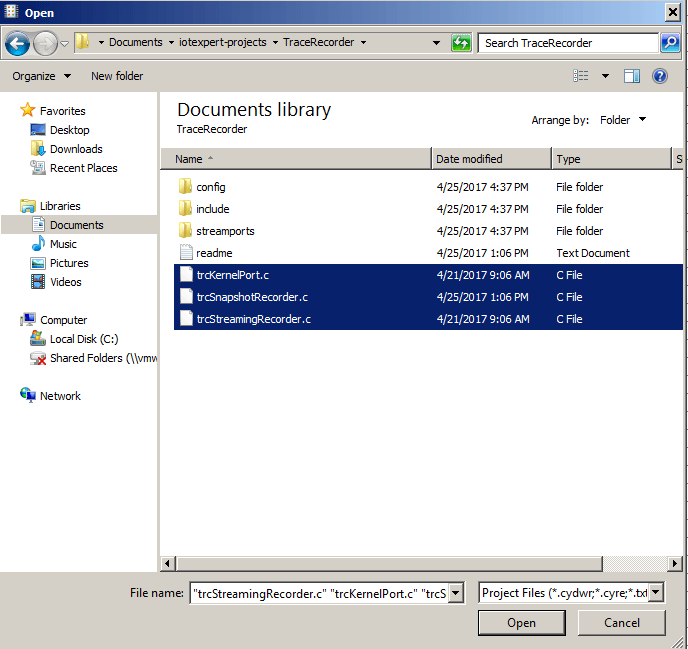 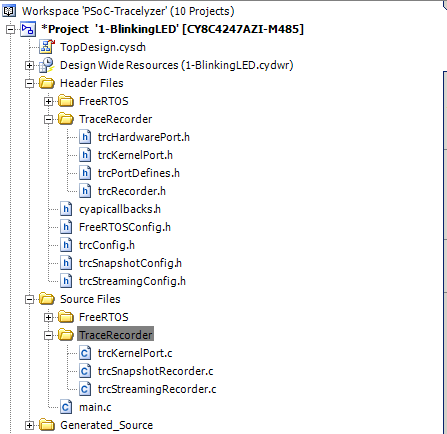 Your project now has all of the necessary body parts so you next will modify the source files.  Start with modifying FreeRTOSConfig.h to include the TraceRecorder Library stuff.

Then modify the trcConfig.h so that it has access to all of the CMSIS header files.

Now, you need to modify the project’s stack and heap size setup 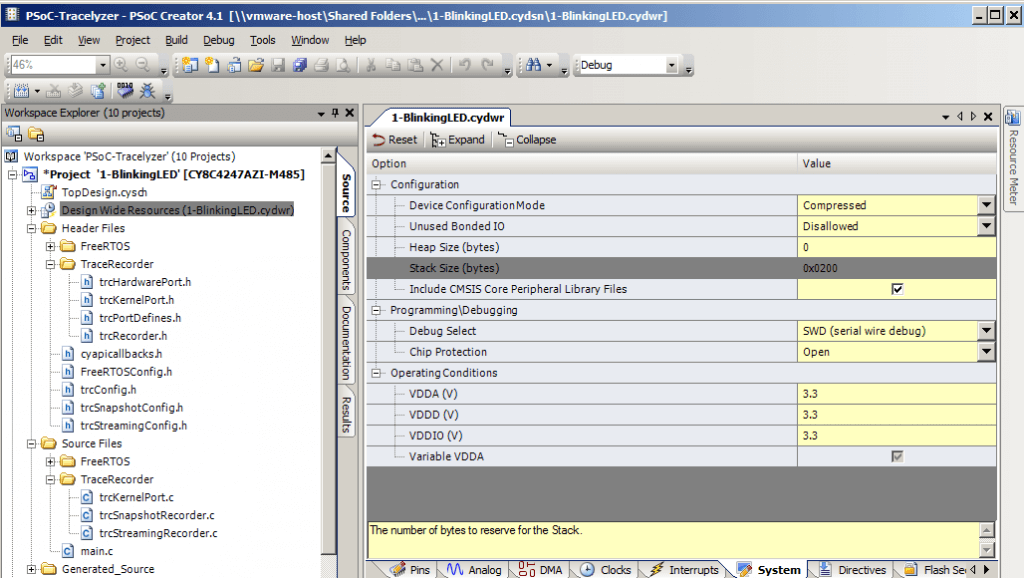 The default snapshot buffer is to big to fit into PSoC SRAM, so I change the size to 400 records

After all of the setup is done you can build and program the development kit. 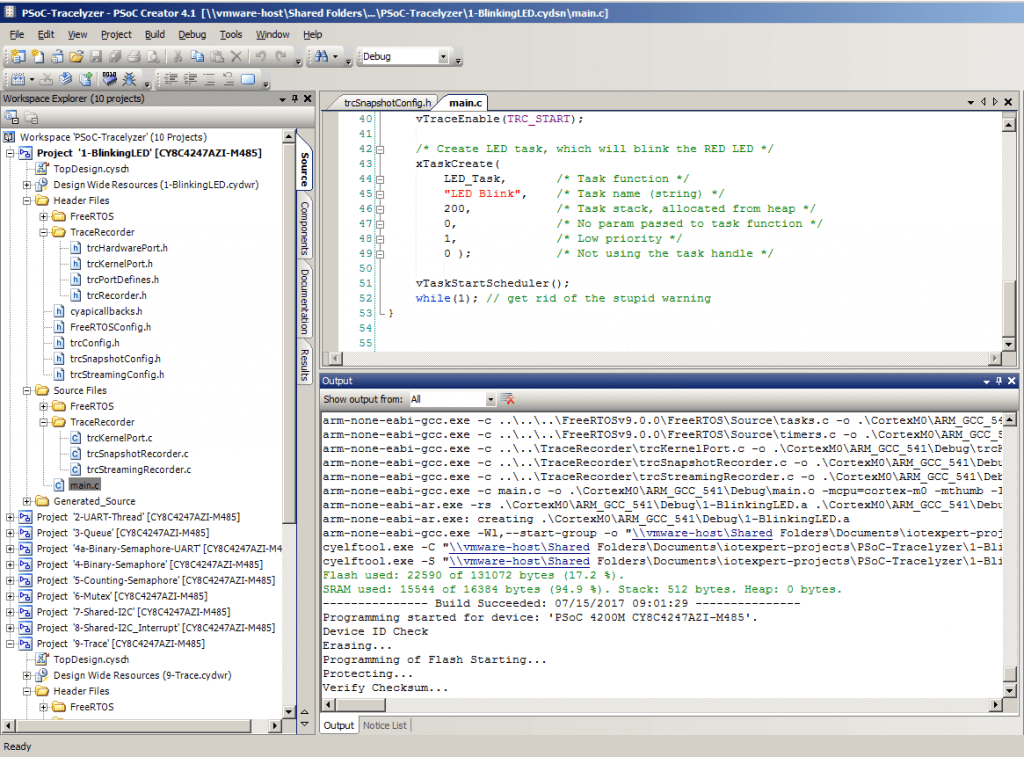 Plug in the Segger J-Link 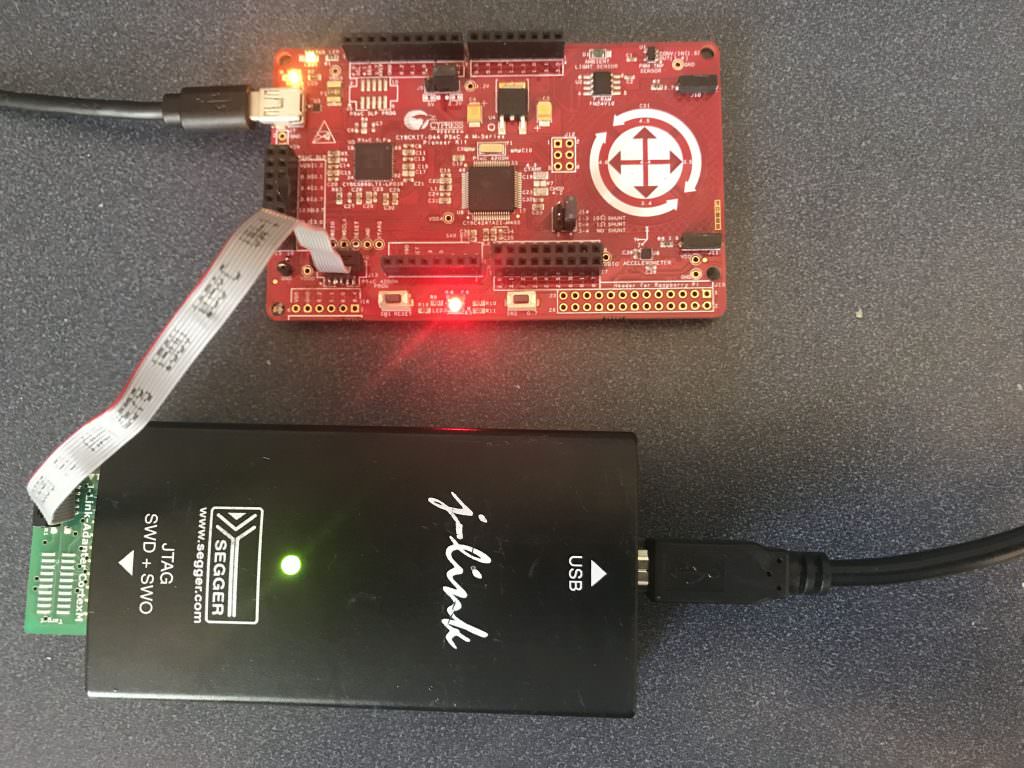 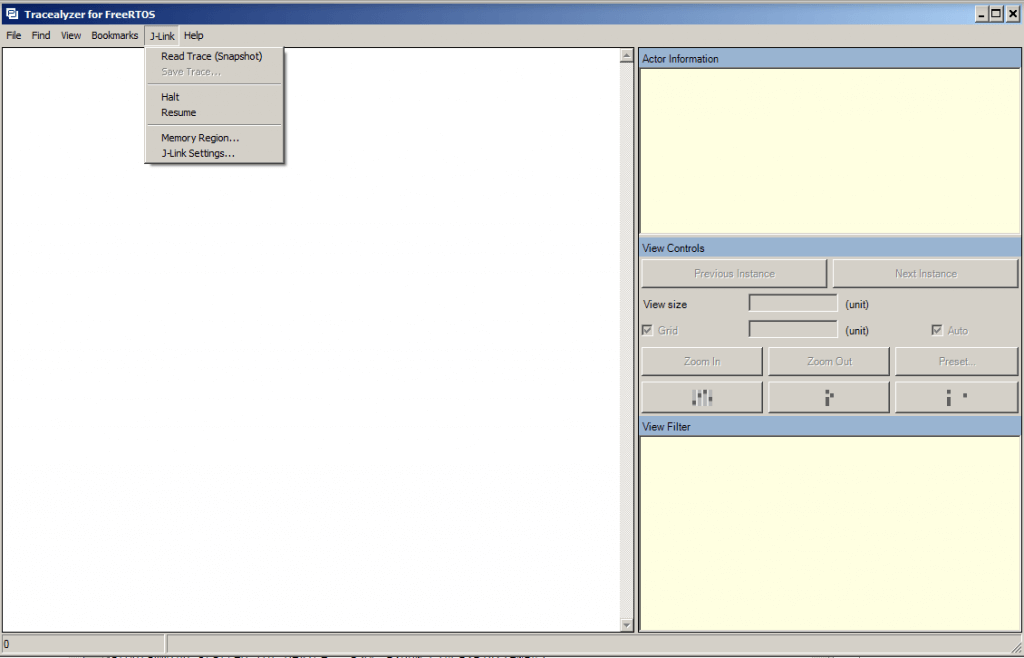 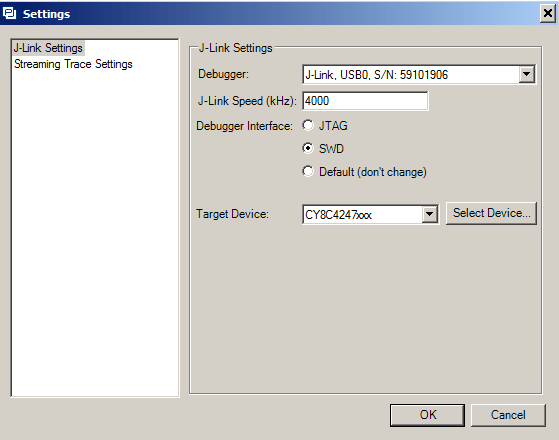 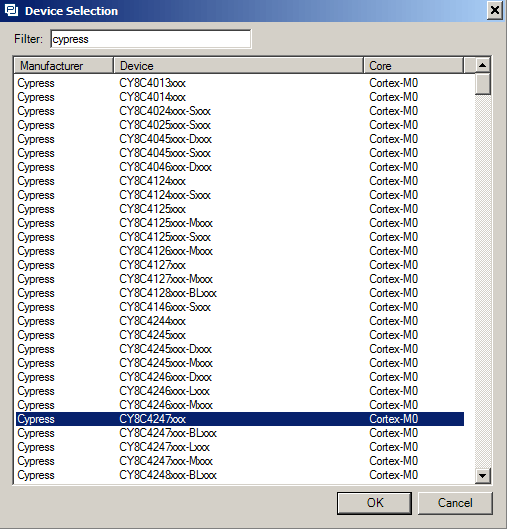 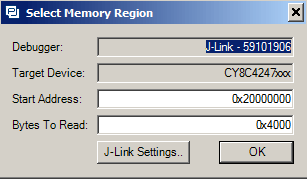 Then you will end up with a screen like this.  Each stripe of white/gray is 1 second in time.  The yellow line is where the startup occurred.  The red lines are where the “LED Blink” task was running.  This seems to make sense as you get a tiny red line 2x/second (remember in the source code we have a 500ms delay so that makes sense). 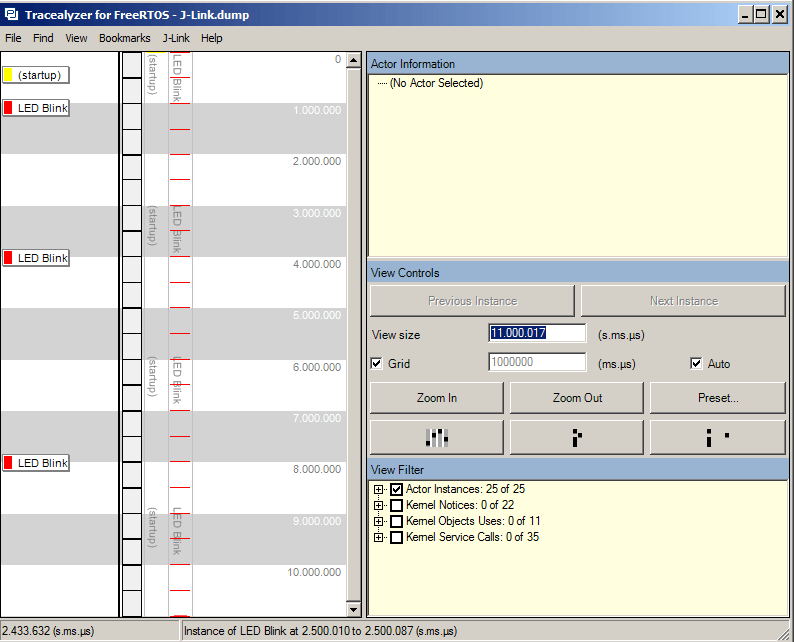 Next I press the reset button on the devkit and re-run the trace.  Then I click on the second red line and the window on the right gives me information about that task.  You can see that the task ran for 53uS and took 23uS to start (time taken up in the FreeRTOS scheduler and Percepio Tracealyzer Recorder Library) 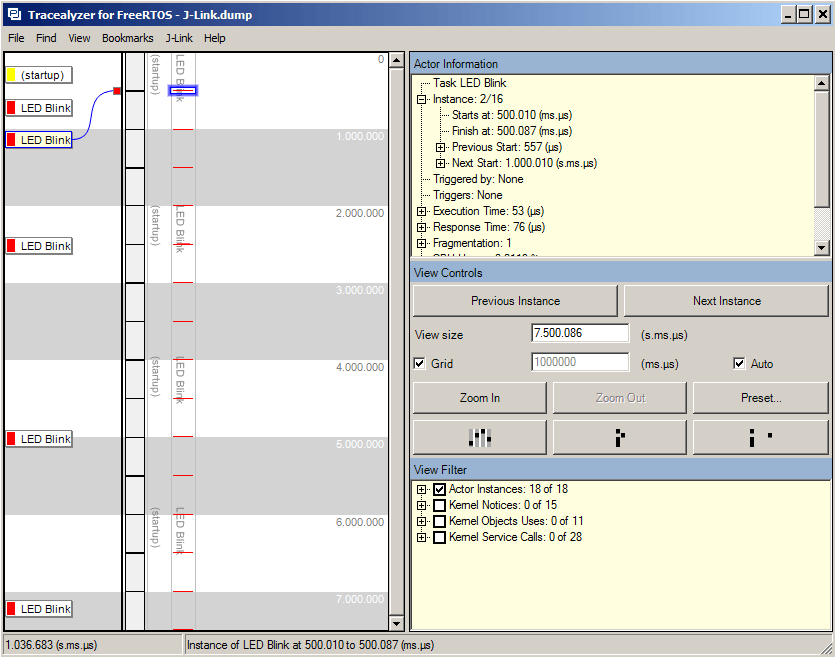 Obviously the snapshot mode is limited by the size of the RAM buffer that you allocate but it saves you the hardware resources and timing constraints that are required to stream FreeRTOS data.  In the next several articles I will show you how to: